C079. Brer Rabbit and His Steeple

45. Brother Wolf Gets in a Warm Place. Text Source: Nights with Uncle Remus by Joel Chandler Harris. Online at Project Gutenberg. I have removed the frame material and standardized the spelling; click here for the original spelling plus all notes to the story.


BRER RABBIT AND HIS STEEPLE

After Brer Fox get hurted so bad, it  was a mighty long time 'fore he could ramble 'round and worry old Brer Rabbit. The time Cousin Wildcat fetched 'im that wipe 'cross the stomach, he took and lay the blame on Brer Rabbit, and when he get well, he just took and juggle with the other critters, and they all agree that them and Brer Rabbit can't drink out of the same branch, nor walk the same road, nor live in the same settlement, nor go in washing in the same wash-hole.

To be sure Brer Rabbit pleased to take notice of all this here kind of judgments and goings on, and he just took and strengthen he house, in the neighborhoods of the windows, and then he put 'im up a steeple on top of that. Yes sir! A sure 'nough steeple, and he rise 'er up so high that folks going along the big road stop and say, "Hey! What kind of meeting-house that?"

Folks'd stop and ask, but Brer Rabbit ain't got time for to make no answer. He hammered, he nailed, he knocked, he lammed! Folks go by, he ain't look up; critters come stand and watch 'im, he ain't look 'round; work, work, work, from sun-up to sun-down, till that there steeple get done. Then old Brer Rabbit took and draw long breath, and wipe he forehead, and allow that if them other critters what been after 'im so long is got any the advantage of him, the time done come for 'em for to show it.

With that he went and got 'im a snack of something to eat, and a long piece of plough-line, and he told he old woman for to put a kettle of water on the fire, and stand 'round close by, and everything he tell 'er not to do, that the very thing she surely must do. Then old Brer Rabbit sat down in he rocking-chair and looked out from the steeple for to see how the land lay.

It weren't long 'fore all the critters hear talk that Brer Rabbit done stop work, and they begun to come 'round for to see what he going do next. But Brer Rabbit, he got up there, he did, and smoke he cigar, and chaw he tobacco, and let he mind run on.

Brer Wolf, he stand and look up at the steeple, Brer Fox, he stand and look up at it, and all the other critters they done the same. Next time you see a crowd of folks looking at something right hard, you just watch 'em. They'll walk 'round one another and swap places, and they'll be constant on the move. That just the way the critters done. They walk 'round and punch one another and swap places, and look and look. Old Brer Rabbit, he sat up there, he did, and chaw he tobacco, and smoke he cigar, and let he mind run on. 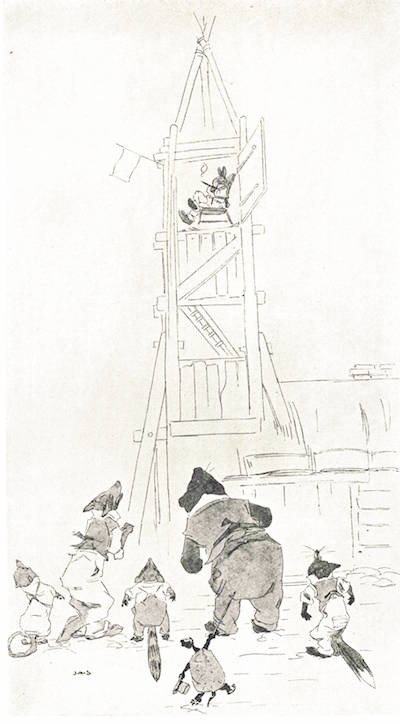 "I'm a-sojourneying up here for to rest myself, Brer Terrapin. Drop up and see me."

"'Twixt you and me, Brer Rabbit, the dropping's all one way. Supposing you turn loose and come. Man live that high up pleased to have wings. I ain't no high-flyer myself. I feared to shake hands with you so far off, Brer Rabbit."

"Not so, Brer Terrapin, not so. My staircase is a mighty limbersome one, and I'll just let it down to you."

With that, Brer Rabbit let down the plough-line.

"Just catch hold of that, Brer Terrapin," says Brer Rabbit, says he, "and up you comes, linktum sinktum binktum boo!" says he.

Old Brer Terrapin know mighty well that Brer Rabbit ain't got nothing against 'im, yet he got such a habit of looking out for hisself that he took and catch the plough-line in he mouth, he did, and try the strength of it. Old Brer Rabbit, he holler, "Swing on, Brer Terrapin!" and Brer Terrapin, he took and swung on, and it weren't long 'fore he was sitting up there side of Brer Rabbit.

The other critters they see Brer Terrapin go up safe and sound, and they see the vittles passing 'round, and they begun to feel like they want to see the inside of Brer Rabbit steeple. Then Brer Wolf, he hail 'im, "Heyo there, Brer Rabbit! You are looking mighty scrumptious way up there! How you come on?"

Brer Rabbit, he look down, he did, and he see who it is hollering, and he respond, "Poorly, mighty poorly, but I thank the Lord I'm able to eat my allowance. Won't you drop up, Brer Wolf?"

"It's a mighty clumsy journey for to make, Brer Rabbit, yet I don't care if I does."

With that, Brer Rabbit let down the plough-line, and Brer Wolf catch hold, and they begun to haul 'im up. They haul and they haul, and when Brer Wolf get most to the top he hear Brer Rabbit holler out, "Stir 'round, old woman, and set the table; but 'fore you do that, fetch the kettle for to make the coffee."

They haul and they haul on the plough-line, and Brer Wolf hear Brer Rabbit squall out, "Watch out there, old woman! You'll spill that boiling water on Brer Wolf!"

And, bless your soul! That was about all Brer Wolf did hear, 'cause the next minute down come the scalding water, and Brer Wolf just fetch one squall and turned hisself a-loose, and when he strike the ground he bounce just same as one of these here Indian-rubber balls. Old Brer Rabbit, he lean from out the steeple and apologize the best he can, but no apology ain't going to make hair come back where the boiling water hit.

Them there critters was mighty curious—more specially Brer Rabbit. When it come down to that, I expect if you'd search the country from hen-roost to river-bank, you won't find a no more curiouser man than Brer Rabbit. All I knows is that Brer Rabbit and Brer Terrapin had a mighty laughing spell just about the time Brer Wolf hit the ground.