C045. Rooster and the Cornbread

11. How Mr. Rooster Lost His Dinner. Text Source: Nights with Uncle Remus by Joel Chandler Harris. Online at Project Gutenberg. I have removed the frame material and standardized the spelling; click here for the original spelling plus all notes to the story.


ROOSTER and the CORNBREAD 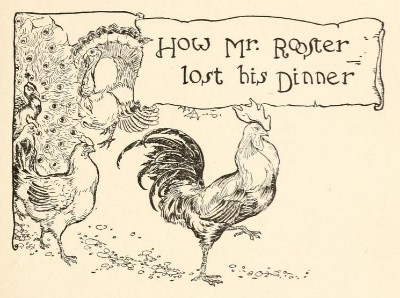 One time, 'way back yonder, there was two plantations right alongside one another, and on both of these plantations was a whole passel of fowls. They was mighty sociable in them days, and it turn out that the fowls on one plantation give a party, which they sent out their invites to the fowls on the other plantation.

When the day come, Mr. Rooster, he blow his horn, he did, and asemble 'em all together, and after they assemble they got in line. Mr. Rooster, he took the head, and after him come old lady Hen and Miss Pullet, and then there was Mr. Peafowl, and Mr. Turkey Gobbler, and Miss Guinea Hen, and Miss Puddle Duck, and all the balance of 'em. They start off sort of raggedy, but it weren't long before they all catch the step, and then they march down by the spring, up through the horse-lot and across by the gin-house, and it weren't long before they get to where the frolic was. 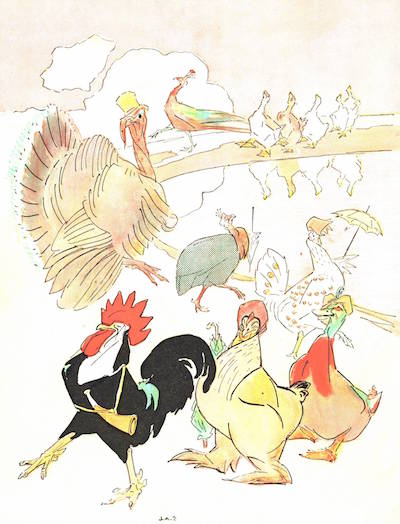 They dance, and they play, and they sing. More specially did they play and sing that there song which it run on like dis:
Come under, come under,
My honey, my love, my own true love;
My heart been a-weepin'
Way down in Galilee.

They was going on this a-way, having their amusements, when, by and by, old Mr. Peafowl, he got on the comb of the barn and blow the dinner-horn. They all wash their face and hands in the back porch, and then they went in to dinner. When they get in there, they don't see nothing on the table but a great big pile of corn-bread. The pones was pile up on pones, and on the top was a great big ash-cake. Mr. Rooster, he look at this and he turn up he nose, and by and by, after awhile, out he strut. Old Miss Guinea Hen, she watching Mr. Rooster motions, and when she see this, she take and squall out, she did, "Pot-rack! Pot-rack! Mr. Rooster gone back! Pot-rack! Pot-rack! Mr. Rooster gone back!"

With that they all make a great to-do. Miss Hen and Miss Pullet, they cackle and squall, Mr. Gobbler, he gobble, and Miss Puddle Duck, she shake her tail and say, quickity-quack-quack. But Mr. Rooster, he ruffle up he cape, and march on out.

This sort of put a damper on the others, but before Mr. Rooster get out of sight and hearing they went to work on the pile what was apparently corn-bread, en, lo and beholds, underneath them pone of bread was a whole passel of meat and greens, and baked taters, and boiled turnips.

Mr. Rooster, he hear the ladies making great admiration, and he stop and look through the crack, and there he see all the doings and fixings. 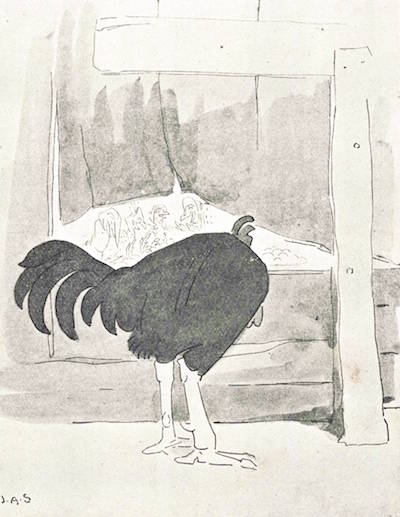 He feel mighty bad, Mr. Rooster did, when he see all this, and the other fowls they holler and ask him for to come back. And he craw, which it mighty empty, likewise, it up and ask him, but he mighty biggity and stuck up, and he strut off, crowing as he go; but he experience of that time done last him and all of his family down to this day.

And you needn't to take my word for it, neither, 'cause if you'll just keep your eye open and watch, you'll catch a glimpse of old Mr. Rooster folks scratching where they expects to find their rations, and more than that, they'll scratch with their rations in plain sight. Since that time, there ain't none of the Mr. Roosters been fooled by that what they see on top. They ain't rest till they see what under there. They'll scratch spite of all creation. 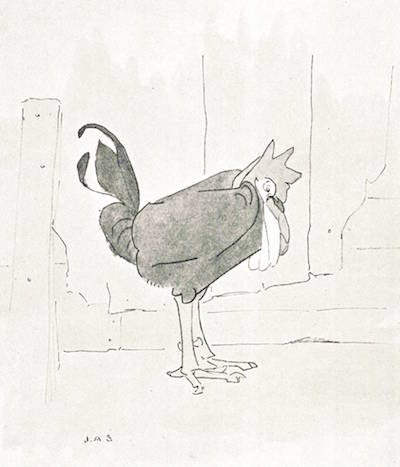