9: Brother Fox Still in Trouble. Text Source: Uncle Remus and His Friends by Joel Chandler Harris. Online at Hathi Trust. I have removed the frame material and standardized the spelling; click here for notes to the story.

I ain't done with that fuss 'twixt Brer Rabbit and Brer Fox. Now, then,  what do Brer Rabbit do after he scorch Brer Fox? Do he go off somewheres and set down and mope, 'cause Brer Fox rushed out from under de burning straw? If you think he gonna do that away, you mighty much mistaken. He just as restless as he ever is been. He move about and he work his mind, he jump 'round and study.

He got him a string of red pepper, and he stewed it down with some hog fat and mutton suet. Then he pick out the pepper, and when the fat and the suet get cold he took and spread the salve on a long piece of rag. He took this rag, he did, and put it in his wallet, and then he got down his walking cane, and went down the road towards the place where Brer Fox live at. He ain't gone so mighty far 'fore he see Brer Fox setting down nursing hisself. Time he see him Brer Rabbit begun to holler, "Nyam! Nyam! Ointment for swellings! Salve for burns and blisters! Nyam! Nyam!"

He holler back, "What you want 'long of me? If it weren't 'cause you got the impudence of Old Scratch hisself, you wouldn't dare to have the face to hail me whiles I going 'long 'tending to my own business. Talk quick! I ain't got no time for to fool with yo' sort!"

Den Brer Fox ask him what he so mighty mad about, and Brer Rabbit allow, "Look how you done me about that hay. Ain't you say you goin' to fetch it on top of the hill for me?"

Brer Fox look astonished. He say, "Name of goodness, Brer Rabbit! You see with yo' own eyes what the reason I can't fetch it up there. Look at my back, what got a blister on it from the top of my head plumb to the end of my tail! I just like to see the man what can tote grass when she get that hot."

Brer Rabbit look at Brer Fox back, and he make a great admiration. He allow, "She sure was hot, Brer Fox, and you got the marks of it. I just took a notion you was playing off one of yo' pranks on me, and my feelin's was hurted."

Brer Fox say, "I hear you goin' on by hollerin' 'bout some kind of ointment of or other what'll pacify burns, an' that what make I holler at you."

With that Brer Rabbit went down in his wallet and fetch out the red-pepper salve, and say to Brer Fox that he must get his old woman for to spread the plaster on the place just soon as he can. Brer Fox took it and wobble off home just fast as he can. Brer Rabbit, he follow along out of sight, and hide in the bushes where he can see and hear what going on.

Well, sir, it weren't long 'fore Brer Rabbit hear Brer Fox fetch a squall, and he shot out of the house, and in about seven jumps he landed in the creek, though the creek was more than a half mile off. 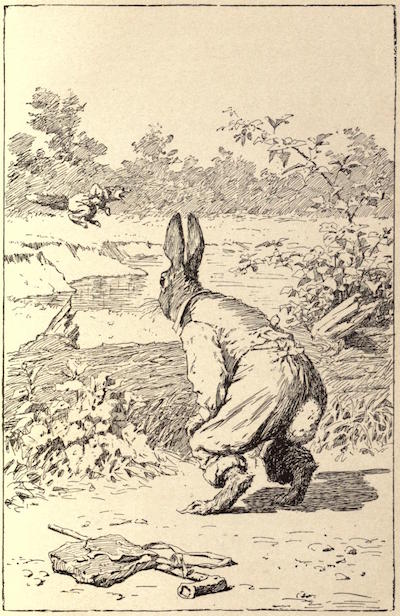 Foxes is scared of water, same as cats, but that there fox, he just roll and wallow in the water. Brer Rabbit still follow after, and when he get where he can see Brer Fox, he just sat down and hold his hands on his side for to keep from busting the buttons off of his waistcoat with laughing.

By and by he holler out, 'Gracious goodness, Brer Fox! What the matter? Is that the way you goes a-fishin'?'

Brer Fox say, "I'm ruined, Brer Rabbit! You done ruined me! That there stuff you give me is right rank poison!"

Brer Rabbit open his wallet, and look in it. Then he allow, "Surely I ain't given you the wrong physic! Lordy! Yes I is! 'Stead of the nyam-nyam ointment, I done gone and give you the nyip-nyip plaster. I believe in my soul I'm a-losing my seven senses!"

Then he sort of fell back in the bushes and like to kill hisself laughing. If old Brer Fox could've seed Brer Rabbit rolling about in the leaves and making the trash fly, he'd've made sure that he done gone and got some of the nyip-nyip plaster on hisself.

Well, then, after so long a time, Brer Fox got well of the burn and the blister, and he went on about his business same as any other critter. He was going 'long by the river bank one day, and he hear a mighty hammering not far off, and he say to hisself that he believe he'll go see what all the fuss was about. He went 'long, he did, en, bless gracious! Who should he see but Brer Babbit with his coat off and his sleeves rolled up, hammering and nailing; and nailing and hammering.

Brer Fox allow, "What you doin' there, Brer Rabbit?"

Brer Fox allow, "What you want with a boat, Brer Rabbit?"

Brer Rabbit say, "To go to my fish-traps in."

Brer Fox look 'round, and see planks and scantlings a-lying 'round, and he make up his mind that he ain't going to go to all that trouble just for the sake of one little boat. So he set on the bank and fight sandflies and mosquitoes, and watch Brer Rabbit make his boat. And he ain't had to wait long neither, 'cause Brer Rabbit, though he was light in the body, was mighty handy, and he got his boat ready in a little or no time. Then he got in it and paddle up the river, and it weren't long 'fore here he come back with a long string of fish.

This make Brer Fox dribble at the mouth, 'cause if there's any kind of vittles what he like more than any other kind, it's fish. So he make up his mind that he pleased to have a boat. Then he ask Brer Rabbit if a mud boat won't do just good as any other kind, and Brer Rabbit make answer that while mud boats might suit some folks, they don't suit him.

Brer Fox ain't got the knack of making plank boats, and so he say to hisself that he going to show Brer Rabbit that some folks know a thing of two as well as itger folks. With dat, he whirl in, and make him a boat out of clay, and when it done got dry in the sun, he shove it out in the water and jump in with his paddle.

Brer Rabbit was there with his plank boat, for to see it well done, and when Brer Fox start, he start too. Well, sir, it's just like I tell you! Brer Fox ain't hit many licks with his paddle 'fore the mud begun to melt; the boat went down, and there was old Brer Fox a-scuffling in the water. After so long a time he got back to the bank, but I let you know he ain't make no more boats, neither mud boats nor plank boats.