7. Mr. Lion Hunts for Mr. Man. Text Source: Nights with Uncle Remus by Joel Chandler Harris. Online at Project Gutenberg. I have removed the frame material and standardized the spelling; click here for the original spelling plus all notes to the story.

Folks can come along with their whatchamacallums, and likewise they can fetch 'round their whatshisnames. They can walk biggity, and they can talk biggity, and more than dat, they can feel biggity, but yet all the same they're going to get caught up with. They go along and they go along, and then by and by here come trouble and snatch 'em slantways, and the more bigger what they is, the worser does they get snatched.

There was Mr. Lion, he took and sat hisself up for to be the boss of all the other critters, and he feel so biggity dat he go roaring and ramping 'round the neighborhoods. He went roaring 'round, he did, and everywhere he go he hear talk of Mr. Man.

Right in the middle of he bragging, someone'd up and tell him about what Mr. Man done done. Mr. Lion, he say he done this, and then he hear about how Mr. Man done that. It went on this a-way till by and by Mr. Lion shake he mane, he did, and he up and say that he going to search 'round and 'round, and high and low, for to see if he can't find Mr. Man, and he allow, Mr. Lion did, that when he do find him, he going to turn in and give Mr. Man such a larruping what nobody ain't never had yet. Them other critters, they took and tell Mr. Lion that he better let Mr. Man alone, but Mr. Lion say he going to hunt him down spite of all they can do.

By and by, whiles he going on this a-way, with he tongue hanging out, he come up with Mr. Steer, grazing along on the side of the road. Mr. Lion, he up and ask him howdy, he did, monstrous polite, and Mr. Steer likewise he bow and scrape and show his manners.

Then Mr. Lion, he do like he want to have some confab with him, and he up and say, says he, "Is there anybody 'round in these parts name Mr. Man?" says he.

"To be sure there is," says Mr. Steer, says he; "anybody can tell you that. I knows him mighty well," says he.

"What might be yo' business with Mr. Man?" says Mr. Steer, says he.

"I done come this long ways for to give him a larrupin'," says Mr. Lion, says he. "I'm goin' to show him who the boss of these neighborhoods," says he, and with that Mr. Lion, he shake he mane, and switch he tail, and strut up and down worse than one of these here town negroes.

"Well, then, if that what you come after," says Mr. Steer, says he, "you just better slew yo'self 'round and point yo' nose towards home, 'cause you fixin' for to get in sure enough trouble," says he.

Mr. Steer, he draw long breath, he did, and chew he cud slow, and after while he say, says he, "You see me standin' here front of yo' eyes, an' you see how big I is, an' what long, sharp horns I got. Well, big as my heft is, an ez  sharp though my horns be, yet Mr. Man, he come out here an' he catch me, an' he put me under a yoke, an' he hitch me up in a cart, an' he make me haul he wood, an' he drive me anywhere he mind to. He do that. Better let Mr. Man alone," says he. "If you fool along with him, watch out that he don't hitch you up an' have you prancing 'round here pulling he cart," says he.

Mr. Lion, he fetch a roar, and put out down the road, and it weren't so mighty long before he come up with Mr. Horse, which he was a-nibbling and a-cropping the grass. Mr. Lion make hisself knowed, and then he took and ask Mr. Horse do he know Mr. Man. 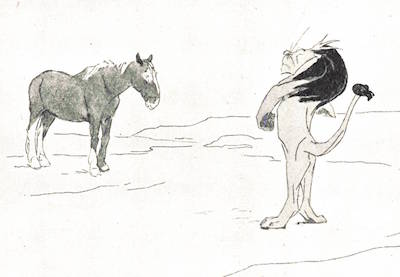 Mr. Horse look at Mr. Lion like he sorry, and by and by he up and say, "I 'spect you better let Mr. Man alone," says he. "You see how big I is, an' how much strength what I got, an' how tough my foots is," says he; "well this here Mr. Man, he can take an' take me an' hitch me up in he buggy, an' make me haul him all 'round, an' then he can take an' fasten me to the plow an' make me break up all his new ground," says he. "You better go along back home. First news you know, Mr. Man'll have you breakin' up his new ground," says he.

Spite of all this, Mr. Lion, he shake he mane and say he going to larrup Mr. Man anyhow. He went on down the big road, he did, and by and by he come up with Mr. Jack Sparrow, sitting up in the top of the tree. Mr. Jack Sparrow, he whirl 'round and chirp, and flutter about up there, and apparently make a great admiration.

But Mr. Lion just vow he going after Mr. Man, and go he would, and go he did. He ain't never see Mr. Man, Mr. Lion ain't, and he don't know what he look like, but he go on towards the new ground. Sure enough, there was Mr. Man, out there mauling rails for to make him a fence. He was ripping up the butt-cut, Mr. Man was, and he drove in his wedge and then he stuck in the glut. He was splitting away, when by and by he hear rustling out there in the bushes, and he look up, and there was Mr. Lion.

Mr. Lion ask him do he know Mr. Man, and Mr. Man allow that he know him more samer than if he were his twin brother. Then Mr. Lion allow that he want to see him, and then Mr. Man say, says he, that if Mr. Lion will come stick his paw in the split for to hold the log open till he get back, he go fetch Mr. Man. Mr. Lion he march up and slap his paw in the place, and then Mr. Man, he took and knock the glut out, and the split close up, and there Mr. Lion was.

With that, Mr. Man saunt out in the bushes and cut him a hickory, and he let in on Mr. Lion, and he flail and flail him till flailing onhim was a sin. And down to this day, you can't get no Lion to come up where there's a Man a-mauling rails and put he paw in the split. That you can't!