34. The Sad Fate of Mr. Fox. Text Source: Uncle Remus, His Songs and His Sayings by Joel Chandler Harris. Online at Project Gutenberg. The word "maul" here presumably means "melt" (i.e. spleen), but misspelled to rhyme with gall. I have removed the frame material and standardized the spelling; click here for the original spelling plus all notes to the story.

Now, then, this here tale what I'm a-going to give you is the last row of stumps, sho. This here's where old Brer Fox lost his breath, and he ain't find it no more down to this day.

One day Brer Rabbit go to Brer Fox house, he did, and he put up mighty poor mouth. He say his old woman sick, and his chilluns cold, and the fire done gone out.

Brer Fox, he feel bad about this, and he took and supply Brer Rabbit with a chunk of fire. Brer Rabbit see Brer Fox cooking some nice beef, and his mouth begun to water, but he take the fire, he did, and he put out towards home; but presently here he come back, and he say the fire done gone out.

Brer Fox allow that he want a invite to dinner, but he don't say nothing, and by and by Brer Rabbit he up and say, says he, "Brer Fox, where you get so much nice beef?" says he, and then Brer Fox he up and respond, says he, "You come to my house tomorrow if yo' folks ain't too sick, and I can show you where you can get plenty beef more nicer than this here," says he.

Well, sure enough, the next day fetch Brer Rabbit, and Brer Fox say, says he, "There's a man down yonder by Miss Meadows's what got heap of fine cattle, an' he got a cow name Bookay," says he, "an' you just go and say Bookay, an' she'll open her mouth, an' you can jump in an' get just as much meat as you can tote," says Brer Fox, says he. 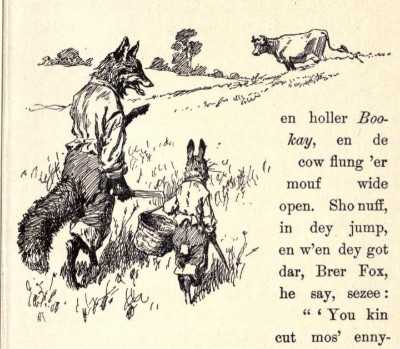 With that they put out, and they went promenading 'round among the cattle, they did, till by and by they struck up with the one they was after. Brer Fox, he up, he did, and holler Bookay, and the cow flung her mouth wide open. 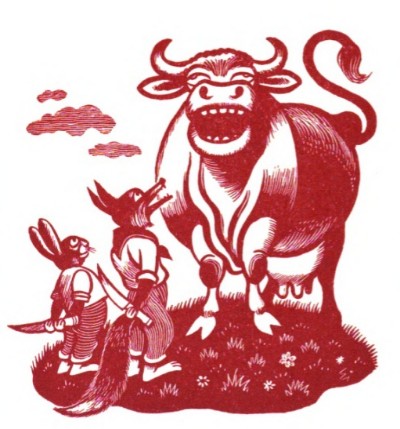 Sure enough, in they jump, and when they got there, Brer Fox, he say, says he, "You can cut most anywheres, Brer Rabbit, but don't cut 'round the haslet," says he.

Then Brer Rabbit, he holler back, he did, "I'm a-gettin' me out a roastin'-piece," says he.

They cut and they carved, and they carved and they cut, and whiles they was cutting and carving, and slashing away, Brer Rabbit, he took and hacked into the haslet, and with that down fell the cow dead.

"What we gonna do?" says Brer Rabbit, says he.

Next morning here come the man what the cow belong to, and he ask who kill Bookay. Nobody don't say nothing. Then the man say he'll cut her open and see, and then he whirl in, and it weren't no time before he had her entrails spread out. Brer Rabbit, he crept out of the gall, and say, says he, "Mister Man! Oh, Mister Man! I'll tell you who kill yo' cow. You look in the maul, an' there you'll find him," says he.

With that the man took a stick and lam down on the maul so hard that he kill Brer Fox stone-dead. When Brer Rabbit see Brer Fox was laid out for good, he make like he mighty sorry, and he up and ask the man for Brer Fox head. Man say he ain't caring, and then Brer Rabbit took and brung it to Brer Fox house.

There he see old Miss Fox, and he tell her that he done fetch her some nice beef what her old man sent her, but she ain't got to look at it till she go to eat it. 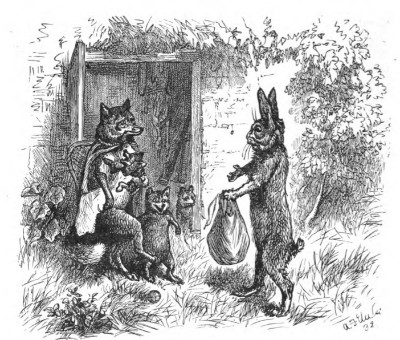 Brer Fox son was name Tobe, and Brer Rabbit tell Tobe for to keep still whiles his mammy cook the nice beef what his daddy sent him. Tobe he was mighty hungry, and he look in the pot he did whiles the cooking was going on, and there he see his daddy head, and with that he set up a howl and told his mammy.

Miss Fox, she get mighty mad when she find she cooking her old man head, and she call up the dogs, she did, and sicced 'em on Brer Rabbit; and old Miss Fox and Tobe and the dogs, they push Brer Rabbit so close that he have to take a hollow tree. 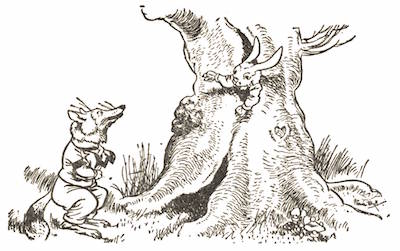 Miss Fox, she tell Tobe for to stay there and mind Brer Rabbit, while she goes and get the ax, and when she gone, Brer Rabbit, he told Tobe if he go to the branch and get him a drink of water that he'll give him a dollar. Tobe, he put out, he did, and bring some water in his hat, but by the time he got back Brer Rabbit done out and gone.

Ole Miss Fox, she cut and cut till down come the tree, but no Brer Rabbit there. Then she lay the blame on Tobe, and she say she going to lash him, and Tobe, he put out and run, the old woman after him.

By and by, he come up with Brer Rabbit, and sat down for to tell him how it was, and whiles they was a setting there, here come old Miss Fox a-slipping up and grab 'em both. Then she tell 'em what she going do. Brer Rabbit she going to kill, and Tobe she going to lam if it's the last act.

Den Brer Rabbit says, says he, "If you please, ma'am, Miss Fox, lay me on the grindstone an' ground off my nose so I can't smell no more when I'm dead."

Miss Fox, she took this to be a good idea, and she fetch both of 'em to the grindstone, and set 'em up on it so that she could ground off Brer Rabbit nose.

Then Brer Rabbit, he up and say, says he, "If you please, ma'am, Miss Fox, Tobe he can turn the handle whiles you goes after some water for to wet the grindstone," says he. 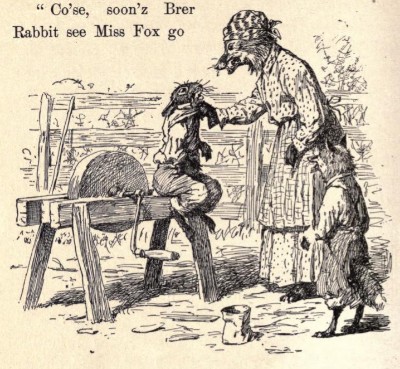 Course, soon as Brer Rabbit see Miss Fox go after the water, he jump down and put out, and this time he get clean away.

Some say that Brer Rabbit's old woman died from eating some poison-weed, and that Brer Rabbit married old Miss Fox, and some say not. Some tells one tale and some tells another; some say that from that time forward the Rabbits and the Foxes make friends and stay so; some say they kept on quarreling. It look like it mixed. Let 'em tell you what knows. That what I hears you gets it straight like I heard it.