13. The Awful Fate of Mr. Wolf. Text Source: Uncle Remus, His Songs and His Sayings by Joel Chandler Harris. Online at Project Gutenberg. I have removed the frame material and standardized the spelling; click here for the original spelling plus all notes to the story.


BRER WOLF in the CHEST

Folks what's always pestering people, and bothering about that what ain't theirs, don't never come to no good end. There was Brer Wolf; instead of minding un his own business, he had to take and go in partnerships with Brer Fox, and there weren't scarcely a minute in the day that he weren't after Brer Rabbit, and he kept on and kept on till first news you knowed he got caught up with—and he got caught up with monstrous bad.

Brer Rabbit ain't see no peace whatsomever. He can't leave home except Brer Wolf'd make a raid and tote off some of the family. Brer Rabbit built him a straw house, and it was tored down; then he made a house out of pine-tops, and that went the same way; then he made him a bark house, and that was raided on, and every time he lost a house he lost one of his chilluns.

Last Brer Rabbit got mad, he did, and cussed, and then he went off, he did, and got some carpenters, and they built him a plank house with rock foundations. After that he could have some peace and quietness. He could go out and pass the time of day with his neighbors, and come back and set by the fire, and smoke his pipe, and read the newspapers same like any man what got a family. 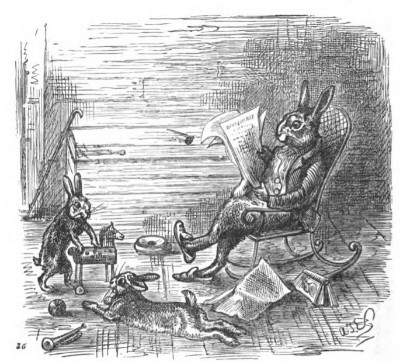 He made a hole, he did, in the cellar where the little Rabbits could hide out when there was much of a racket in the neighborhood, and the latch of the front door caught on the inside. Brer Wolf, he see how the land lay, he did, and he lay low. The little Rabbits was mighty skittish, but it got so that cold chills ain't run up Brer Rabbit's back no more when he heared Brer Wolf go galloping by. 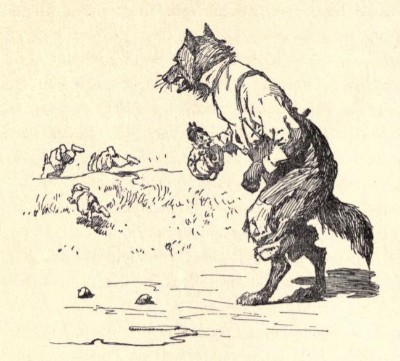 By and by, one day when Brer Rabbit was fixing for to call on Miss Coon, he heared a monstrous fuss and clatter up the big road, and almost before he could fix his ears for to listen, Brer Wolf run in the door. The little Rabbits there went into their hole in the cellar, they did, like blowing out a candle. Brer Wolf was fairly covered with mud, and mighty nigh out of wind. 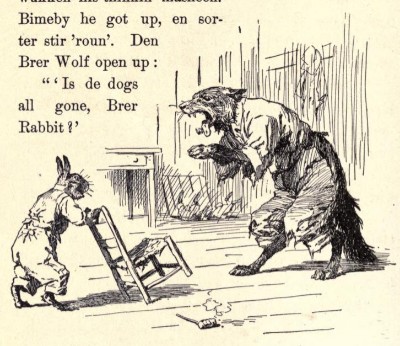 No quicker said than done.

"Jump in that big chest there, Brer Wolf," says Brer Rabbit, says he; "jump in there an' make yo'self at home."

In jump Brer Wolf, down come the lid, and into the hasp went the hook, and there Mr. Wolf was. Then Brer Rabbit went to the looking-glass, he did, and wink at hisself, and then he drawed the rocking-chair in front of the fire, he did, and took a big chaw tobacco.

Then Brer Rabbit sat there long time, he did, turning his mind over and working his thinking machine. By and by he got up, and sort stir 'round. Then Brer Wolf open up, "Is the dogs all gone, Brer Rabbit?"

"Seem like I hear one of 'em smelling round the chimney-corner just now." 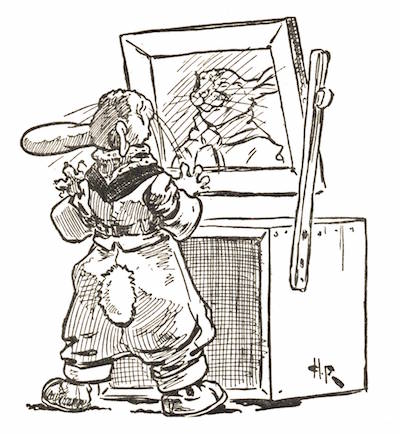 Then Brer Rabbit get the kettle and fill it full of water, and put it on the fire.

Then Brer Rabbit went to the cupboard and get the gimlet, and commence for to bore little holes in the chest-lid. 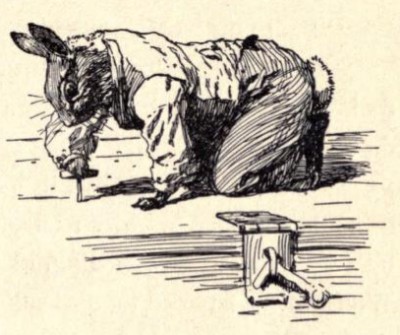 "I'm borin' little holes so you can get breath, Brer Wolf."

Then Brer Rabbit went out and get some more wood, and fling it on the fire.

Then Brer Rabbit went down into the cellar and fetch out all his chilluns. 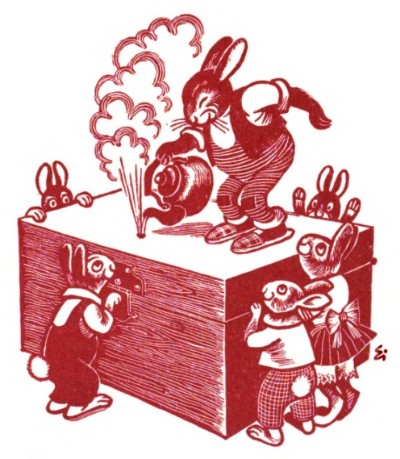 "I'm a-tellin' my chilluns what a nice man you is, Brer Wolf."

Amd the chilluns, they had to put their hands on their mouths for to keep from laughing. Then Brer Rabbit he got the kettle and commenced for to pour the hot water on the chest-lid.

"What that I hear, Brer Rabbit?"

Then the water begin for to sift through.

"What that I feel, Brer Rabbit?" 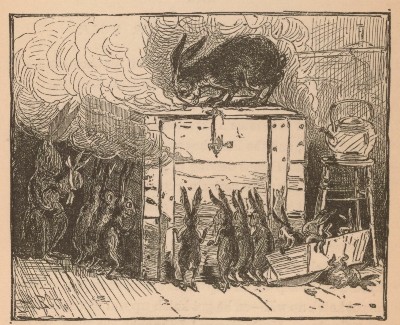 "Turn over on the other side, Brer Wolf."

"What that I feel now, Brer Rabbit?" 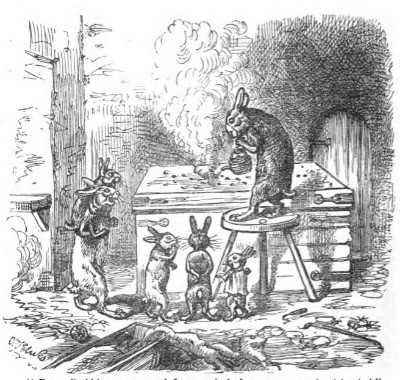 "They are eatin' me up, Brer Rabbit," and them was the last words of Brer Wolf, 'cause the scalding water done the business. 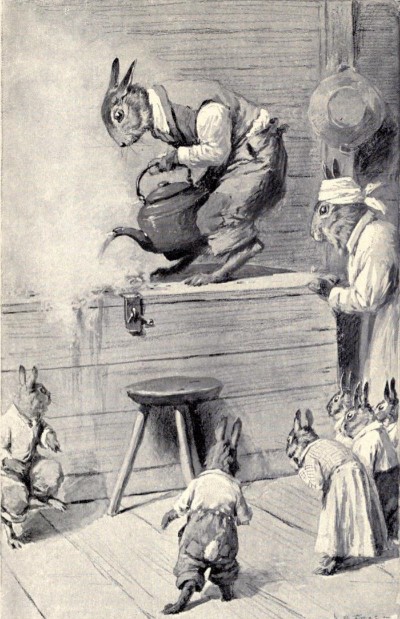 
Then Brer Rabbit call in his neighbors, he did, and there held a regular jubilee; and it you go to Brer Rabbit's house right now, I don't know but what you'll find Brer Wolf's hide hanging in the back-porch, and all 'cause he was so busy with other folkses' doings. 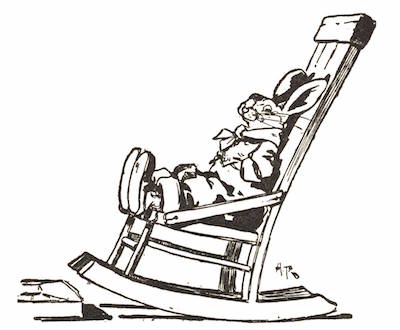