19: Heyo, House!. Text Source: Uncle Remus and His Friends by Joel Chandler Harris. Online at Hathi Trust. I have removed the frame material and standardized the spelling; click here for notes to the story.

After he done make way with old Brer Lion, all the other critters say he surely is a mighty man, and they treat 'im good. This make 'im feel so proud that he pleased to show it, and so he strut 'round like a boy when he get his first pair of boots.

About that time, Brer Wolf took a notion that if Brer Rabbit can outdo old Brer Lion, he can't outdo him. So he pick his chance one day whiles old Miss Rabbit and the little Rabs is out picking salad for dinner. He went in the house, he did, and wait for Brer Rabbit to come home. 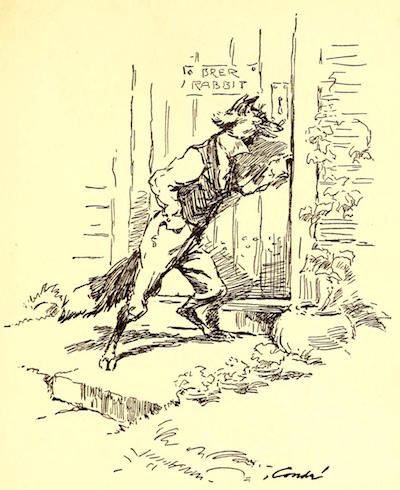 Brer Rabbit had his hours, and this was one of 'em, and it weren't long 'fore here he come. He got a mighty quick eye, man, and he took notice that everything mighty still. When he got little nigher, he took notice that the front door was on the crack, and this make 'im feel funny, 'cause he know that when his old woman and the chillun out, they always pulls the door shut and catch the latch.

So he went up a little nigher, and he step thin as a batter cake. He peep here, and he peep there, yet he ain't see nothing. He listen in the chimney corner, and he listen under the window, yet he ain't hear nothing.

Then he sort of wipe his mustache and study. He allow to hisself, "The pot rack know what going on up the chimney, the rafters know who's in the loft, the bed cord know who under the bed. I ain't no pot-rack, I ain't no rafter, and I ain't no bed-cord, but, please gracious! I'm going to find who's in that house, and I ain't going in there neither. Theyre more ways to find out who fell in the mill-pond without falling in yourself. Some folks, would've rushed in there, and if they had, they wouldn't've rushed out no more, 'cause there wouldn't've been nothing at all left of 'em but a little scrap of hide and a handful of hair.

Brer Rabbit got better sense than that. All he ask anybody is to just give 'im hand-roomance, and them what can catch 'im is more than welcome to take 'im. That exactly the kind of man what Brer Rabbit is. He went off a little ways from the house and climbed a persimmon stump and got up there and begun to holler. 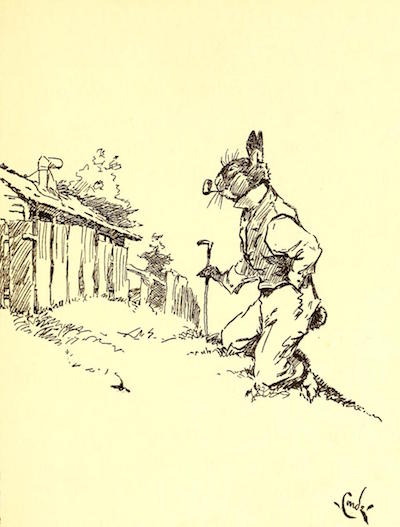 The house ain't make no answer, and Brer Wolf, in there behind the door, open his eyes wide. He ain't know what to make of that kind of doings.

House ain't make no answer, and Brer Wolf in there behind the door sort of move roun' like he getting restless in the mind.

Brer Rabbit out there on the persimmon stump holler more louder than before, "Heyo, house! Heyo!"

House stand still, and Brer Wolf in there behind the door begun to feel cold chills streaking up and down his back. In all his born days he ain't never hear no goings on like that. He peep through the crack of the door, but he can't see nothing.

Brer Rabbit holler louder, "Heyo, house! Ain't you going to heyo? Is you done lost what little manners you had?"

Brer Wolf move about worse than before. He feel just like someone done hit 'im on the funny-bone.

Brer Rabbit holler hard as he kin, but still he ain't get no answer, and then he allow, "Surely something or other is the matter with that house, 'cause all the times before this, it been hollering back at me, Heyo, yourself!"

Then Brer Rabbit wait little bit, and by and by he holler one more time, "Heyo, house!"

Old Brer Wolf try to talk like he expect a house'd talk, and he holler back, "Heyo, yourself!"

Brer Rabbit wunk at hisself. He allow, "Heyo, house! Whyn't you talk hoarse like you got a bad cold?"

Then Brer Wolf holler back, hoarse as he can, "Heyo, yourself!"

This make Brer Rabbit laugh till a little more and he'd've dropped off of that there persimmon stump and hurt hisself.

He allow, "Eh-eh, Brer Wolf! That ain't nigh going to do. You'll have to stand out in the rain a mighty long time 'fore you can talk hoarse as that house!"

I let you know, Brer Wolf come a-slinking out, and made a break for home. After that, Brer Rabbit live a long time without any of the other critters a-pestering him!