69. Brother Fox's Fish-Trap. Text Source: Nights with Uncle Remus by Joel Chandler Harris. Online at Project Gutenberg. Harris notes that "snake-doctors" are dragonflies. I have removed the frame material and standardized the spelling; click here for the original spelling plus all notes to the story.

One time Brer Fox and Brer Rabbit live the on river. After they been living there so long a time, Brer Fox allow that he got a mighty hankering after something besides fresh meat, and he say he believe he make him a fish-trap. Brer Rabbit say he wish Brer Fox mighty well, but he ain't honing after fish hisself, and if he is he ain't got no time for to make no fish-trap.

No matter for that, Brer Fox, he took and got him out some timber, he did, and he work nights for to make that trap. Then when he get it done, he took and hunt him a good place for to set it, and the way he sweat over that there trap was a sin—that it was.

Yet after so long a time, he got her set, and then he took and wash he face and hands and go home. All the time he was fixing of it up, Brer Rabbit was setting on the bank watching him. He sat there, he did, and play in the water, and cut switches for to whip at the snake-doctors, and all that time Brer Fox, he pull and haul and tote rocks for to hold that trap enduring a freshet.

Brer Fox went home and rest hisself, and by and by he go down for to see if there any fish in he trap. He sort of feared of snakes, but he feel 'round and he feel 'round, yet he ain't feel no fish. Then he go off.

By and by, 'long towards the last of the week, he go down and feel 'round again, yet he ain't feel no fish. It keep on this a-way till Brer Fox get sort of fag out. He go and he feel, but there ain't no fish there.

After while, one day, he see the signs where somebody been robbing he trap, and he allow to hisself that he'll just in about watch and find out who the somebody is. Then he took and got in he boat and paddle under the bushes on the bank and watch he fish-trap. He watch all the morning; nobody ain't come. He watch all enduring of after dinner; nobody ain't come. Along towards night, when he just about making ready for to paddle off home, he hear fuss on the other side the river, and lo and beholds, here come Brer Rabbit poling a boat right towards Brer Fox fish-trap.

Look like he don't know how to use a paddle, and he just had him a long pole, and he'd stand up in the behind part of he boat, and put the end of the pole against the bottom, and shove her right ahead.

Brer Fox get mighty mad when he see this, but he watch and wait. He allow to hisself, he did, that he can paddle a boat perter than anybody can pole 'em, and he say he surely going catch Brer Rabbit this time. 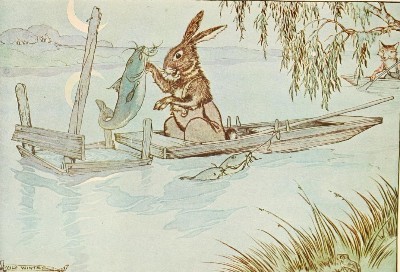 Just about that time, Brer Fox paddle out from under the bushes, and make towards Brer Rabbit, and he holler out, "Ah-yi! You are the man what been robbing my fish-trap this long time! I got you this time! Oh, you needn't try to run! I got you this time sure!"

No sooner said than no sooner done. Brer Rabbit fling he fish in he boat and grab up the pole and push off, and he had more fun getting 'way from there than he ever had before in all he born days put together. Brer Fox, he was there, and he seed it, and Brer Rabbit, he seed it, and even down to old Brer Bullfrog, a-sitting on the bank, he seed it. 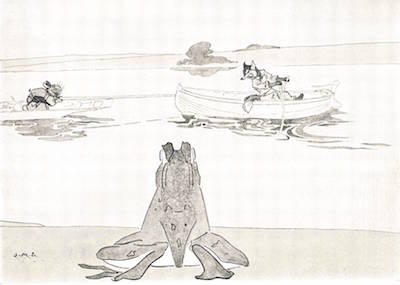 When the nose of Brer Fox boat get close to Brer Rabbit boat all Brer Rabbit got to do in the round world is to take he pole and put it against Brer Fox boat and push hisself out the way. The harder he push Brer Fox boat back, the perter he push he own boat forward. It look mighty easy to old Brer Bullfrog sitting on the bank, and all Brer Fox can do is to shake he fist and grit he tooth, whiles Brer Rabbit sail off with the fish.