C017. Brer Rabbit and the Butter

17. Mr. Rabbit Nibbles Up the Butter. Text Source: Uncle Remus, His Songs and His Sayings by Joel Chandler Harris. Online at Project Gutenberg. I have removed the frame material and standardized the spelling; click here for the original spelling plus all notes to the story.


BRER RABBIT and the BUTTER

They had a big day's work in front of 'em, and they fetch their dinner with 'em. They lump the vittles up in one pile, and the butter what Brer Fox brung, they goes and puts in the spring-house for to keep cool, and then they went to work, and it weren't long before Brer Rabbit's stomach begun to sort of growl and pester him. That butter of Brer Fox sat heavy on his mind, and his mouth water every time he remember about it. 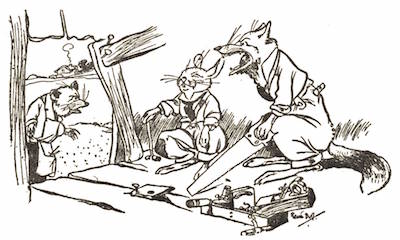 Presently he say to hisself that he pleased to have a nip at that butter, and then he lay his plans, he did. First news you know, while they was all working long, Brer Rabbit raise his head quick and fling his years forward and holler out, "Here I is. What you want with me?" and off he put like something was after him.

He sallied 'round, old Brer Rabbit did, and after he make sure that nobody ain't following on him, into the spring-house he bounces, and there he stays till he get a bite of butter. The he saunter on back and go to work.

"Where you been?" says Brer Fox, says he.

"I hear my chilluns callin' me," says Brer Rabbit, says he, "an' I have to go see what they want. My old woman done gone and took mighty sick," says he.

They work on till by and by the butter taste so good that old Brer Rabbit want some more. Then he raise up his head, he did, and holler out, "Heyo! Hold on! I'm a comin'!" and off he put. 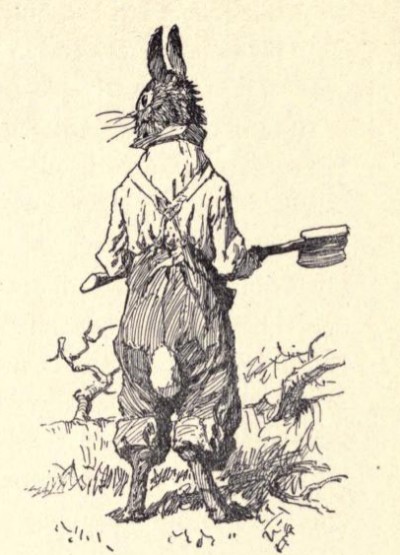 This time he stay right smart while, and when he get back Brer Fox ask him where he been.

Directly Brer Rabbit hear 'em calling him again and off he goes, and this time, bless your soul, he gets the butter out so clean that he can see hisself in the bottom of the bucket. 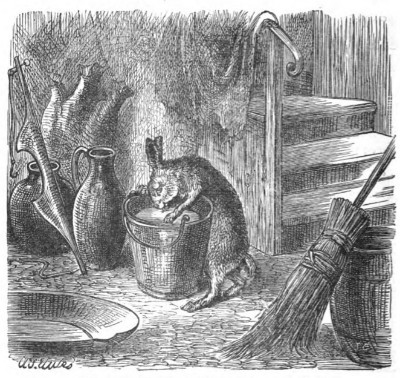 He scrape it clean and lick it dry, and then he go back to work looking more samer than a black man what the patter-rollers been had hold of. 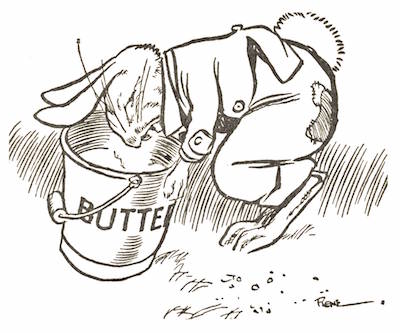 "I'm obliged to you, Brer Fox," says Brer Rabbit, says he, "but I'm feared she's done gone by now," and that sort of make Brer Fox and Brer Possum feel in mourning with Brer Rabbit.

By and by, when dinner-time come, they all got out their vittles, but Brer Rabbit keep on looking lonesome, and Brer Fox and Brer Possum they sort of rustle round for to see if they can't make Brer Rabbit feel sort of splimmy, sort of splimmy-splammy — sort of like he in a crowd — sort of like his old woman ain't dead as she might be. You know how folks does when they gets where people's a-moaning.

Brer Fox and Brer Possum rustle round, they did, getting out the vittles, and by and by Brer Fox, he say, says he, "Brer Possum, you run down to the spring and fetch the butter, and I'll sail 'round here and set the table," says he.

Brer Possum, he lope off after the butter, and directly here he come loping back with his years a-tremling and his tongue a-hanging out. Brer Fox, he holler out, "What the matter now, Brer Possum?" says he.

"You all better run here, folks," says Brer Possum, says he. "The last drop of that butter done gone!"

"Where she gone?" says Brer Fox, says he.

"Look like she dry up," says Brer Possum, says he.

Then Brer Rabbit, he look sort of solemn, he did, and he up and say, says he, "I 'spect that butter melt in somebody mouth," says he.

Then they went down to the spring with Brer Possum, and sure enough the butter done gone. Whiles they was disputing over the wonderment, Brer Rabbit say he see tracks all 'round there, and he point out that if they'll all go to sleep, he can catch the chap what stole the butter.

Then they wake up Brer Possum, and tell him about it, but course Brer Possum deny it to the last. Brer Fox, though, he's a kind of lawyer, and he arguify this way—that Brer Possum was the first one at the butter, and the first one for to miss it, and more than that, there hang the signs on his mouth. 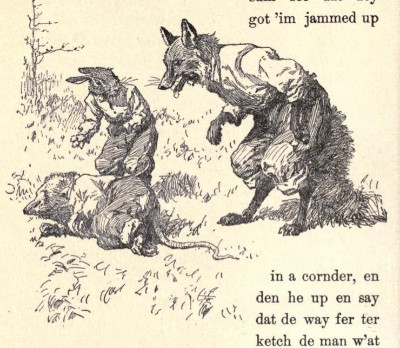 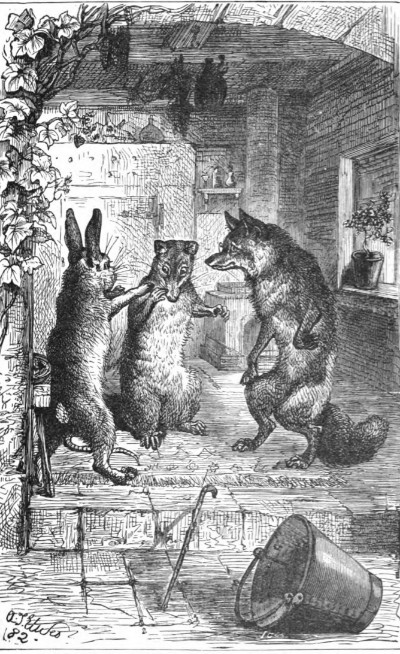 When she got to blazing up good, Brer Rabbit, he took the first turn. He sort of step back, and look 'round and giggle, and over he went more samer than a bird flying. 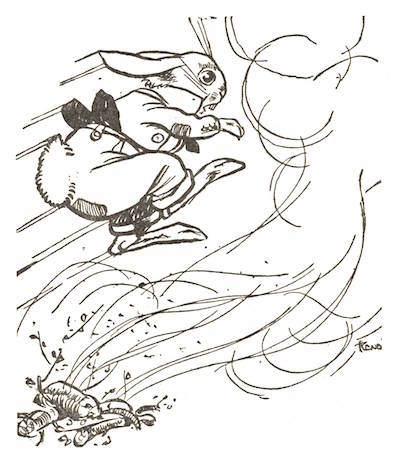 Then come Brer Fox. He got back little further, and spit on his hands, and lit out and made the jump, and he come so nigh getting in that the end of his tail catch afire. 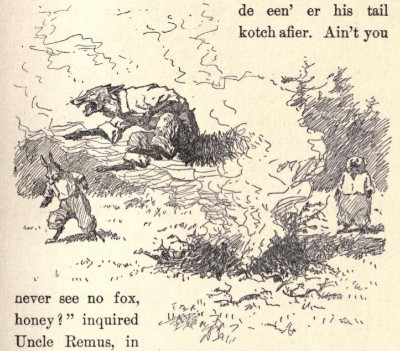 Ain't you never see no fox? Well, next time you see one of 'em, you look right close and see if the end of his tail ain't white. It's just like I tell you. They bears the scar of that brush-heap down to this day. They are marked—that's what they is—they are marked.

Old Brer Possum, he took a running start, he did, and he come lumbering along, and he lit—kerblam!—right in the middle of the fire, and that was the last of old Brer Possum. 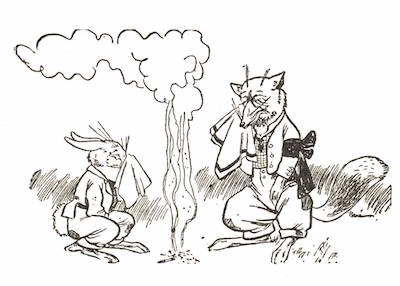 That what make I say what I does: in this world, lots of folks is got to suffer for other folkses sins. Look like it's mighty wrong; but it's just that away. Tribulation seem like she's a-waiting round the corner for to catch one and all of us.