68. Brother Fox Makes a Narrow Escape. Text Source: Nights with Uncle Remus by Joel Chandler Harris. Online at Project Gutenberg. I have removed the frame material and standardized the spelling; click here for the original spelling plus all notes to the story. The story starts with a little song.

Well, I tell you, one time there was a monstrous dry season in the settlement where all the critters live at, and drinking-water got mighty scarce. The creeks got low, and the branches went dry, and all the springs make their disappearance excepting one great big one where all the critters drunk at. They'd all meet there, they would, and the biggest'd drink first, and by the time the big ones all done assuaged their thirst, there weren't a drop left for the little ones scarcely.

Course Brer Rabbit was on the happy side. If anybody gonna get water Brer Rabbit the man. The critters'd see he track 'round the spring, but they ain't never catch him.

It got so after while that the big critters'd crowd Brer Fox out, and then it weren't long 'fore he hunt up Brer Rabbit and ask him what he gonna do.

Brer Rabbit, he sort of study, and then he up and tell Brer Fox for to go home and rub some molasses all on hisself and then go out and wallow in the leafs. Brer Fox ask what he must do then, and Brer Rabbit say he must go down by the spring, and when the critters come to the spring for to get they water, he must jump out at 'em, and then after that he must wallow like he one of them there kind of varmint what got bugs on 'em.

Brer Fox, he put out for home, he did, and when he get there he run to the cupboard and just gawm hisself with molasses, and then he went out in the bushes, he did, and wallow in the leafs and trash till he look most bad as Brer Rabbit look when he play Will-o-the-Wisp on the critters.

When Brer Fox get hisself all fix up, he went down to the spring and hide hisself. By and by all the critters come after their water, and whiles they was a-scuffing and a-hunching, and a-pushing and a-scrouging, Brer Fox he jump out of the bushes, and sort of switch hisself 'round, and, bless your soul, he look like the Old Boy.

Brer Wolf took and see him first, and he jump spang over Brer Bear head. Brer Bear, he leap back, and ask who that, and just time he do this then the other critters they took and make a break, they did, like pumpkins rolling down hill, and most 'fore you can wink your eye-ball, Brer Fox had the range of the spring all by hisself.

Yet it weren't for long, 'cause 'fore the critters moved far, they took and turn 'round, they did, and crept back for to see what that there scary-looking varmint doing. When they get back in seeing distance there was Brer Fox walking up and down switching hisself.

The critters don't know what to make of him. They watch, and Brer Fox march; they watch, and he march. It keep on this a-way till by and by Brer Fox begun to wallow in the water, and right there was where Brer Rabbit had him. Time he begun to wallow in the water the molasses begun to melt, and it weren't no time scarcely 'fore the molasses and the leafs done all wash off, and there was old Brer Fox just as natural as life.

The first Brer Fox know about the leafs coming off, he hear Brer Bear holler on top of the hill, "You head him off down there, Brer Wolf, and I'll head him off 'round here!" 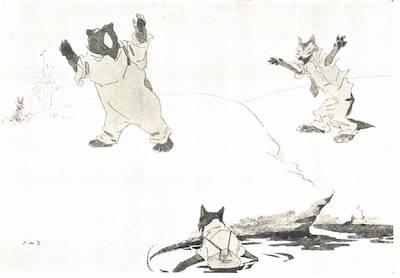 Brer Fox look 'round and he see all the leafs done come off, and with that he make a break, and he weren't none too soon, neither, 'cause little more and the critters would've caught him.