65. Mr. Hawk and Brother Rabbit. Text Source: Nights with Uncle Remus by Joel Chandler Harris. Online at Project Gutenberg. There are two versions of the story, one told by Tildy and one by Remus. I have removed the frame material and standardized the spelling; click here for the original spelling plus all notes to the story.

I hear tell of one time, when old Mr. Hawk took and caught Brer Rabbit. One time Brer Rabbit was going 'long through the bushes singing to hisself, and he see a shadow pass before him. He look up, and there was Mr. Hawk sailing 'round and 'round. Time he see him, Brer Rabbit begun to kick up and sassy him.

Mr. Hawk ain't pay no attention to this. He just sail all 'round and 'round. Every time he sail 'round, he get little closer, but Brer Rabbit ain't notice this. He too busy with his devilment. He shook his fist at Mr. Hawk, and chunked at him with sticks; and after while he took and make out he got a gun, and he took aim at Mr. Hawk, and allowed, "Pow!" and then he holler and laugh. 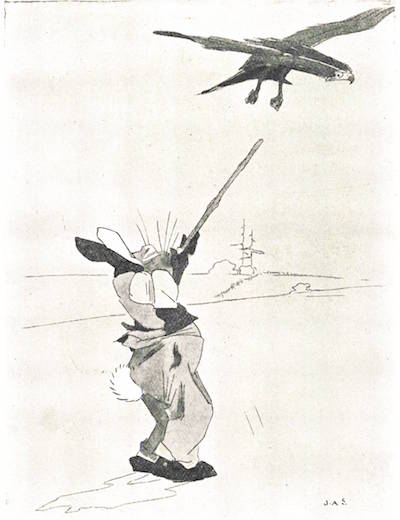 All this time Mr. Hawk keep on sailing 'round and 'round and gitting nigher and nigher, and by and by down he dropped right slambang on Brer Rabbit, and there he had him. Brer Rabbit fix for to say his prayers, but 'fore he do that, he talk to Mr. Hawk, and he talk mighty forgiving. He allow he did, "I was just playing, Mr. Hawk; I was just a-playing. You oughtn't to fly up and get mad with a little bit of man like me."

Mr. Hawk ruffle up the feathers on his neck and say, "I ain't flying up, I'm a-flying down, and when I fly up, I'm a-going to fly away with you. You been a-playing the imp 'round in this settlement long enough, and now if you got any will to make, you better make it quick, 'cause you ain't got much time."

Brer Rabbit cry. He say, "I mighty sorry, Mr. Hawk, that I is. I got some gold buried right over there in fence corner, and I wish in my soul my poor little chilluns know where it was, 'cause then they could get 'long without me for a month or two."

Mr. Hawk allow, "Whereabouts is all this gold?"

Brer Rabbit allow, "Right over there in the fence-corner."

Mr. Hawk say show it to him. Brer Rabbit say he don't care if he do, and he say, "I'd've done showed it to you long 'fore this, but you hold me so tight, I can't wink my eye scarcely, much less walk to where the gold is."

Mr. Hawk say he feared he going to try to get away. Brer Rabbit say there ain't no danger of that, 'cause he one of these here kind of mens when they are caught once they're caught for good.

Mr. Hawk sort of let Brer Rabbit loose, and they went towards the fence-corner. Brer Rabbit, he went along so good that this sort of ease Mr. Hawk mind about he getting away. They got to the place and Brer Rabbit look all 'round, and then he frown up like he got some mighty bad disappointment, and he say, "You may believe me or not, Mr. Hawk, but we are on the wrong side of the fence. I hid that gold somewheres right in that corner there. You fly over and I'll go through."

He was in there, and there he stayed till Mr. Hawk got tired of hanging around there.

Now, then, old man Hawk,—which they call him Billy Blue-tail in my day and time,—old man Hawk, he took and caught Brer Rabbit just like you done said. He caught him and he held him in a mighty tight grip, let alone that he held him so tight that it make Brer Rabbit breath come short like he just come off of a long journey.

Mr. Hawk, says he, "I'll make way with you, and then I'll go catch me a couple of Jaybirds."

This make Brer Rabbit shake with the allovers, 'cause if there's any kind of critter what he naturally despise on the topside of the earth, it's a Jaybird.

Brer Rabbit, says he, "Do, pray, Mr. Hawk, go catch them Jaybirds first, 'cause I can't stand 'em being on top of me. I'll stay right here, plumb till you come back," says he.

Brer Rabbit, says he, "If you can't do that, Mr. Hawk, then the best way for you to do is to wait and let me get tame, 'cause I'm that wild now that I don't taste good."

Brer Rabbit, says he, "Well, then, if that won't do, you better wait and let me grow big so I'll be a full meal of vittles."

Mr. Hawk, says he, "Now you are talking sense!"

Brer Rabbit, says he, "And I'll rush 'round amongst the bushes, and drive out Partridges for you, and we'll have more fun than what you can shake a stick at."

Mr. Hawk sort of study about this, and Brer Rabbit, he beg and he explain, and the long and the short of it was that Brer Rabbit took and get loose, and he ain't get no bigger, and neither is he drove no Partridges for Mr. Hawk.