14: Brother Rabbit's Courtship. Text Source: Daddy Jake, The Runaway by Joel Chandler Harris. Online at Hathi Trust. I have removed the frame material and standardized the spelling; click here for notes to the story.

There was a time when Brer Rabbit went a-courting. I bound you there ain't been no such courting since that day, and there ain't going to be no more such. Now then! You done hear talk of Miss Meadows and the gals, and about how Brer Rabbit been going there so much. Well, it done happen so that Brer Rabbit was took with a-liking of one of the gals. This make him sort of glad at the off-start, but by and by he begun to get droopy. He laid around and sat about, he did, and look like he studying about something or other way off yonder.

It went on this away till by and by Miss Meadows, she up and ask Brer Rabbit what the name of sense is the matter along with him, and Brer Rabbit, he feel so bad that he up and respond, he did, that he dead in love with one of the gals. Then Miss Meadows, she ask him what the reason he ain't tell the gal that he want to be her bridegroom. Brer Rabbit say he ashamed. Miss Meadows, she toss her head, she did, and allow, "Ya-a-a-s! You look like you ashamed, now don't you? You might've been ashamed 'fore hens had their toothies pulled out, but you ain't been ashamed since. I done see you cut up too many capers; I know there ain't no gal on the top side of the earth what can faze you," says Miss Meadows, says she.

Then Brer Rabbit allow that he scared the gal won't have him, but Miss Meadows refuse to hold any more confab with him; she just broke out singing and washing the dishes, and what with the tune and the clatter of the dishes Brer Rabbit can't hear his own ears. By and by, he took and sneak out, he did, and went and sat in the shade by the spring.

He ain't sat there long 'fore here come the gal what he been studying about. She had a pail in her hand and she was coming after water. She come along down the path swinging the pail in her hand and singing. It was sort of like this, if I ain't make no mistakes in the tune:
Oh, says the woodpecker, pecking on the tree,
Once I courted Miss Kitty Killdee,
But she proved fickle and from me fled,
And since that time my head been red.

Brer Rabbit been feeling mighty droopy and low-spirited all the morning, but time he hear the gal singing, he hoist up his ears and look sassy, and when she stop singing he broke out and begun to sing hisself. He sung this here kind of tune:
Katy, Katy! won't you marry?
Katy, Katy! choose me then!
Mammy say if you will marry
She will kill the turkey hen;
Then we'll have a new convention,
Then we'll know the rights of men.

Well, sir, the gal hear Brer Rabbit singing, and she sort of toss her head and giggle. Brer Rabbit he look at her sideways and sort of grin. Then Brer Rabbit allow, "Morning, ma'm; how you come on this fine morn ing?

The gal say, "I'm just tolerable; how you do yourself?"

Brer Rabbit allow, he did, "I thank you, ma'm, I'm right poorly. I ain't been feeling to say really pert in mighty nigh a month."

The gal laugh and say, "That what I hear tell. I expect you in love, Brer Rabbit. You ought to go off somewheres and get you a wife."

This make Brer Rabbit feel sort of ashamed, and he hung his head and make marks in the sand with his foots. By and by he say, "How come, ma'm, that you don't get married?"

The gal laugh worse and worse, and after she can catch her breath she allow, "Lordy, Brer Rabbit! I got too much sense  —  myself  —  for to be getting married without no sign or no dream."

Then Brer Rabbit say, "What kind of sign does you want, ma'm?"

The gal allow, "Just any kind of sign; don't make no difference what. I done try all the spells, and I ain't see no sign yet."

Brer Rabbit say, "What kind of spells is you done tried, ma'm?"

The gal allow, "There ain't no telling, Brer Rabbit, that there ain't. I done try all that I hear talk about. I took and fling a ball of yarn out of the window at midnight, and there ain't nobody come and wind it. I took a looking-glass and look down in the well and I ain't see nothing at all. I took a hardboiled egg and scoop the yellow out, and fill it up with salt and eat it without drinking any water. Then I went to bed, but I ain't dream about a blessed soul. I went out 'twixt sunset and dark and fling hempseed over my left shoulder, but I ain't see no beau yet."

The gal, she giggle, and say, "Oh, hush, Brer Rabbit! if you don't go 'way from here I gonna hit you! You too funny for anything. What beau you expect I'd've seed?"

The gal, she look at Brer Rabbit just like her feelings is been hurted, and say, "Ain't you ashamed of yourself to be talking that a-way and making fun? I'm a-going away from this spring, 'cause it ain't no place for me."

With that the gal fetch her frock a flirt, and went up the path like the patter-roller was after her.

She went so quick and so fast that she left her pail, and Brer Rabbit, he took and fill it full of water, and carry it on up to the house where Miss Meadows and the gals live at. After so long a time, he came on back to the spring, and he sat there, he did, and study and study. He pull his mustaches and scratch his head, and by and by, after he been sitting there a mighty long time, he jump up and crack his heels together, and then he laugh fit to kill hisself.

The gal done gone, but Brer Rabbit, he hang around there, he did, and lay his plans. He laid 'em so good that when dark come he had 'em all fixed. The first thing what he done, he went down to the canebrake and there he cut him a long reed. He gnaw it; he just naturally gnaw it. Then when he do that, he took and make a hole in it from end to end, right through the joints. When dark come, Brer Rabbit took his cane and made his way to the house where Miss Meadows and the gals stay at. He crept up, he did, and listen, and he hear 'em talking and laughing on the inside. Seem like they was done eating supper and sitting 'round the fire-place.

By and by the gal say, "What you reckon? I seed Brer Rabbit down at the spring."

The other gal say, "What he doing down there?"

The gal say, "I expect he was going a-gallanting; he most surely did look mighty slick."

The other gal say, "I'm mighty glad to hear that, 'cause the last time I seed him it look like his britches was needing patching."

This kind of talk make Brer Rabbit look kind of solemncholy. But the gal, she up and allow, "Well, he ain't look that away today, bless you! He look like he just come out of a bandbox."

Miss Meadows, she hove a sigh, she did, and say, "Fine or no fine, I wish him or some other man or woman would come and wash up these here dishes, 'cause my back is that stiff till I can't scarcely stand up straight."

Then they all giggle, but the gal say, "You all shan't talk about Brer Rabbit behind his back. He done say he going to be my beau."

Miss Meadows, she allow, "Well, you better take him and make something or somebody out of him."

The gal laugh and say, "Oh, no! I done told him that 'fore I get married, I got to have some sign, so I'll know pointedly when the time done come."

When Brer Rabbit hear this, he got in a big hurry. He took one end of the reed and stuck it in the crack of the chimney, and then he run to the other end, which it was laying out in the weeds and bushes. When he get there, he held it up to his head and listen, and he can hear 'em just as plain as if they was right at him.

Miss Meadows ask the gal what kind of sign she want, and the gal she say she don't care what kind of one it is, just so it's a sign. About that time Brer Rabbit put his mouth to the reed, and talk like he got a bad cold. He sing out, he did:
Some likes cake, and some likes pie,
Some loves to laugh, and some loves to cry,
But the gal that stays single will die, will die!

Miss Meadows allow, "Who that out there?"

Then they got a light and hunted all around the place and under the house, but they ain't see nothing nor nobody. They went back and sat down, they did, but it weren't long 'fore Brer Rabbit sing out:
The drought ain't wet, and the rain ain't dry,
Where you sow your wheat, you can't cut rye,
But the gal that stays single will die, will die.

Miss Meadows, and the gals was that astonished that they ain't know what to do, and by and by Brer Rabbit, he sing out again:
I wants the gal that's after a sign,
I wants the gal and she must be mine  —
She'll see her beau down by the big pine.

And sure enough, the next morning when the gal went down by the big pine, there sat Brer Rabbit just as natural as life. The gal, she make out, she did, that she just come down there after a chew of rosin. They jawered 'round a-right smart, and dispute along with one another. But Brer Rabbit, he got the gal. 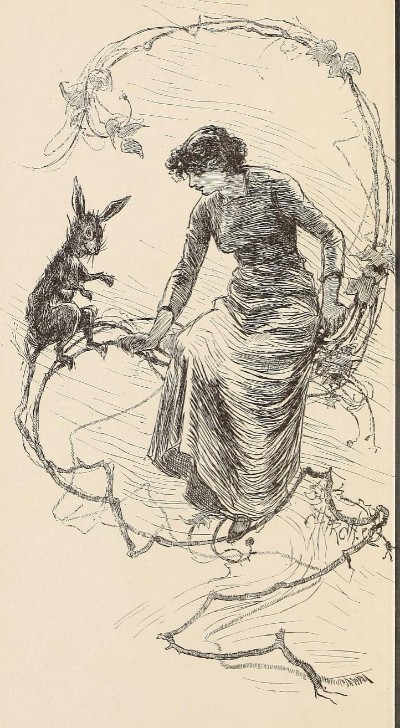