5. Brother Rabbit's Astonishing Prank. Text Source: Nights with Uncle Remus by Joel Chandler Harris. Online at Project Gutenberg. I have removed the frame material and standardized the spelling; click here for the original spelling plus all notes to the story.

I expect that was the reason what make old Brer Rabbit get along so well, because he ain't copy after none of the other critters. When he make his disappearance before 'em, it was always in some brand new place. They ain't know whereabouts for to watch out for him. He was the funniest critter of the whole gang. Some folks might have call him lucky, and yet, when he get in bad luck, it look like he most always come out on top. It look mighty curious now, but it weren't curious in them days, because it was done given up that, strike him when you might and where you would, Brer Rabbit was the supplest critter going.

One time, he sort of took a notion, old Brer Rabbit did, that he'd pay Brer Bear a call, and no sooner do the notion strike him than he pick hisself up and put out for Brer Bear house. Brer Rabbit make he call when Brer Bear and his family was off from home. He sat down by the road, and he see 'em go by —old Brer Bear and old Miss Bear, and their two twin-chilluns, which one of 'em was name Kubs and the other one was name Klibs. 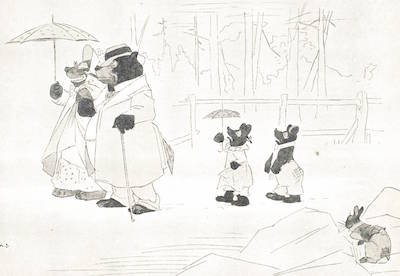 Ole Brer Bear and Miss Bear, they went along ahead, and Kubs and Klibs, they come shuffling and scrambling along behind. When Brer Rabbit see this, he say to hisself that he expect he better go see how Brer Bear getting on; and off he put. And it weren't long neither before he was ransacking the premises same like he was sure enough patter-roller.

Whiles he was going 'round peeping in here and poking in there, he got to fooling among the shelfs, and a bucket of honey what Brer Bear got hid in the cupboard fall down and spill on top of Brer Rabbit, and little more and he'd've been drown. From head to heels that critter was covered with honey; he weren't just only bedabble with it, he was just covered. He had to sit there and let the natural sweetness drip out of he eyeballs before he can see he hand before him, and then, after he look 'round little, he say to hisself, says he, "Heyo, here! What I gonna do now? If I go out in the sunshine, the bumbly-bees an' the flies they'll warm up an' take me, and if I stay here, Brer Bear'll come back and catch me, and I don't know what in the name of gracious I gonna do."

Brer Rabbit, he jump 'round, he did, and try to shake the leafs off of him, but the leafs, they ain't going to be shook off. Brer Rabbit, he shake and he shiver, but the leafs they stick; and the capers that critter cut up out there in the woods by he own-alone self was scandalous—they was that; they was scandalous. Brer Rabbit see this weren't going to do, and he allow to hisself that he better be getting on towards home, and off he put.

I expect you done hear talk of these yer booggers what gets after bad chilluns. Well, then, just exactly that a-way Brer Rabbit look, and if you'd've seed him you'd've made sure he the grand-daddy of all the booggers. Brer Rabbit pace along, he did, and every motion he make, the leafs they'd go swishy-swushy, splushy-splishy, and, from the fuss he make and the way he look, you'd've took him to be the most servigorous varmint what disappear from the face of the earth since old man Noah let down the draw-bars of the ark and turn the critters loose; and I bound if you'd've struck up long with him, you'd've been mighty good and glad if you'd've got off with that.

The first man what Brer Rabbit come up with was old Sis Cow, and no sooner is she lay eyes on him than she hoist up her tail in the elements, and put out like a pack of dogs was after her. This make Brer Rabbit laugh, 'cause he know that when a old settled woman like Sis Cow run distracted in the broad open day-time, that they must be something' mighty curious about them leafs and that honey, and he keep on a-racking down the road.

The next man what he meet was a black gal tolling a whole passel of plantation shotes, and when the gal see Brer Rabbit come prancing along, she fling down her basket of corn and just fairly fly, and the shotes, they took through the woods, and such a racket as they kick up with their running, and their snorting, and their squealing ain't never been hear in that settlement neither before nor since.

It keep on this a-way long as Brer Rabbit meet anybody—they just broke and run like the old Boy was after 'em. Course, this make Brer Rabbit feel monstrous biggity, and he allow to hisself that he expect he better drop 'round and skirmish in the neighborhoods of Brer Fox house. And whiles he was standing there running this 'round in he mind, here come old Brer Bear and all of he family.

Brer Rabbit, he get crossways the road, he did, and he sort of sidle towards 'em. Old Brer Bear, he stop and look, but Brer Rabbit, he keep on sidling towards 'em. Old Miss Bear, she stand it long as she can, and then she fling down her parasol and took a tree. Brer Bear look like he going to stand his ground, but Brer Rabbit he jump straight up in the air and give hisself a shake, and, bless your soul, old Brer Bear make a break, and they tells me he tore down a whole panel of fence getting away from there. And as to Kubs and Klibs, they took their hats in their hands, and they went skaddling through the bushes just same as a drove of horses. 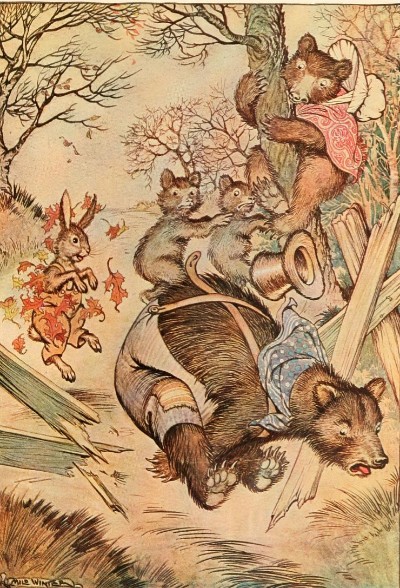 Brer Rabbit paraded on down the road, and by and by here come Brer Fox and Brer Wolf, fixing up a plan for to nab Brer Rabbit, and they was so intents on their confab that they got right on Brer Rabbit before they seed him; but, gentlemens, when they is catch a glimpse of him, they given him all the room he want. Brer Wolf, he try to show off, he did, 'cause he want to play big before Brer Fox, and he stop and ask Brer Rabbit who is he. Brer Rabbit, he jump up and down in the middle of the road, and holler out, "I'm the Will-o'-the-wisp. I'm the Will-o'-the-wisp, and you are the man I'm after!" Den Brer Rabbit jump up and down and make like he going after Brer Fox and Brer Wolf, and the way them critters lit out from there was a caution. 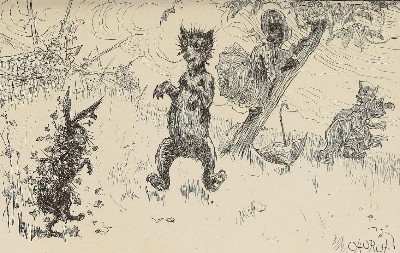 Long time after that, Brer Rabbit come up with Brer Fox and Brer Wolf, and he get behind a stump, Brer Rabbit did, and holler out, "I'm the Will-o'-the-wisp, and you are  the mens I'm after!"

Brer Fox and Brer Wolf, they broke, but before they got out of sight and out of hearing, Brer Rabbit show hisself, he did, and laugh fit to kill hisself. Aftewards, Miss Meadows she hear about it, and the next time Brer Fox call, the gals they up and giggle, and ask him if he ain't feared the Will-o'-the-wisp might drop in.