8: Uncle Remus's Wonder Story. Text Source: Daddy Jake, The Runaway by Joel Chandler Harris. Online at Hathi Trust. I have removed the frame material and standardized the spelling; click here for notes to the story.

One time, 'way back yonder, when the moon was lots bigger than what she is now, there was a old Witch-Wolf living 'way off in the swamp, and this here old Witch-Wolf was up to to all sorts of contrariness. Look like she was cross-ways with the whole of creation. When she weren't doing devilment, she was studying up devilment. She had a mighty way, the old Witch-Wolf did, that when she get hungry she'd change herself to be a woman. She could just shut her eye and smack her mouth, and instead of being a big black wolf, with long claws and green eye-balls, she'd come to be the likeliest looking gal that you most ever seed.

It seem like she love to eat folks, but 'fore she can eat 'em she had to marry 'em; and when she take a notion, she just change herself to be a likely looking gal, and sails in and get married. Then when she do that, she just take and change herself back to be a wolf, and eat 'em up raw. Go where you can, and where you might, and yet I don't expect you can find any worse critter than what this old Witch-Wolf was.

Well, then, when she get everything good and ready, she just took and back her ears, and bat her eyes, and smack her mouth, and there she was — a likely young gal! She up and got to the looking-glass, she did, and singe her hair with the curling-tongs, and tie ribbons on her clothes, and fix up her beau-catchers. She look nice, fit to kill now.

Then she took and pass by the man house, and look back and snicker, and hold her head on one side, and sort of shake out her clothes, and put her hand up for to see if the hairpins in their place. She pass by this away lots of times, and by and by the man caught a glimpse of her; and no sooner is he do this than she wave her handkerchief. The man he watch her and watch her, and by and by, after she kept on whipping by, he come out and hail her. And then she took and stop, and nibble at her fan and fumble with her handkerchief, and they took and stand there, they did, and pass the time of day.

After that the sun never riz and sat without she hold some confab with the man; and it weren't long 'fore the man took a notion that she the very gal for a wife, what he been a-hunting for. With that they just got right down to old-fashion courting. They'd laugh, they'd giggle, they'd dispute, they'd pout. And the old Witch Wolf make sure she was going to get the man; let alone that, the man he make sure he was going to get the gal.

He study and study, and after while it come across he mind that he better go and ask old Judge Rabbit about her, being as he been living 'round there a mighty long time.

Old Judge Rabbit, done got old in age and gray in the mind. He done sober up and settle down, and I let you know there weren't many folks in them diggings but what went to old Judge Rabbit when they get in trouble. So the man he went to Judge Rabbit house and rap at the door.

Then Judge Rabbit begin to talk like one of these here town lawyers. He allow, he did, "Mighty short name for grown man. Gimme the full entitlements."

Man he give 'em to him, and then old Judge Rabbit open the door and let him in. They sat there by the fire, they did, till by and by it weren't long 'fore the man begun to tell him about this here great gal what he been courting along with. 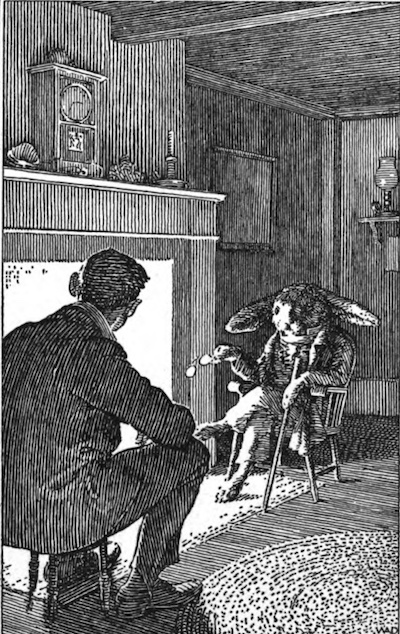 By and by Judge Rabbit ask him, says he, "What this here great gal name?"

After he done ask all this, Judge Rabbit got up, he did, and went across the room to the looking-glass. When he see hisself in there, he took and shut one eye, s-l-o-w. Then he sat down and leant back in the chair, and allow, says he, "I done had the idea in my head that old Mizzle-Mazzle done move out of the country, and yet here she is galloping 'round just as natural as a dead pig in the sunshine!"

Man look astonished, but he ain't say nothing.

Judge Rabbit keep on talking. "You ain't never been trouble with no trouble yet, but if you want to be troubled with trouble that's double and treble trouble, you just go and marry old Mizzle-Mazzle," says he. "You needn't to believe me less and you want to," says he. "Just go along and marry her," says he.

Man he look scared. He up and allow, he did, "What the name of goodness I going do?"

Old Judge Rabbit look solemncholy. "You got any cows?" says he.

Man say he got plenty of 'em.

Man, he allow, he did, that he mighty much obliged to old Judge Rabbit, and with that he make he bow and took he leave. He went home, he did, and when he get there, sure enough there was this here nice-looking gal a-promenading up and down the road, and shaking her handkerchief. Man, he hail her, he did, and ask her how she come on. She allow she pretty well, and how do he do. Man say he feeling sort of poorly. Then she up and ask him what the matter. Man say he expect he feel poorly 'cause he so powerful lonesome. Then this here nice-looking gal, she ask him what make he so powerful lonesome. Man he say he expect he so powerful lonesome 'cause he want to marry.

Man, he say the cow just as gentle as a dog.

"Does you expect I'm a-going to let that cow kick me crank-sided?" says she.

Man, he allow, he did, that the cow won't kick, but that there gal she took and make more excuses than there is frogs in the spring branch, but by and by she say she can try. But she allow that first 'fore she try that she'll show him how she can keep house. So the next morning here she come, and I let you know she sailed in there, and set that house to rights 'fore some women folks can tun 'round. Man, he say, he did, that she do that mighty nice.

Next day, the gal set in and got dinner. Man say, he did, that there ain't nobody what can beat that dinner. Next day, she set in and scoured, and she make that floor shine same as a looking-glass. Man, he say there ain't nobody in that neighborhoods can beat that scouring. Next day, she come for to milk the red cow, and the man, he allow to hisself, he did, that he going to see what make she don't like to milk that cow.

The gal come, she did, and get the milk-piggin, and scald it out, and then she start for the cow-lot. Man, he crept along after the gal for to watch her. Gal went on, and when she come to the lot there was the red cow standing in the fence-corner walloping her cud. Gal, she sort of shook the gate, she did, and holler, "Sook, cow! Sook, cow!"

Cow, she perten up at that, 'cause she know when folks call her that a-way, she going to come in for a bucket of slops.

She perten up, the red cow did, and start towards the gate, but, gentlemens! Time she smell that gal, she begun a bleat like she smell blood, and pawed the ground and shook her head just like she fixing for to make fight. Man, he allow to hisself that this here kind of business mighty curious, and he keep on watching.

Gal, she open the gate, but instead of the cow making fight, she begun to buck. Gal, she say, "So, cow! So, cow, so!" but the cow she hoist her tail in the elements, and run 'round that lot like the dogs was after her. Gal, she follow on, and it sort of look like she going to get the cow hemmed up in a corner, but the cow ain't got no notion of this, and by and by she whirl and make a plunge at the gal, and if the gal hadn't've leaped the fence quick as she did the cow would've got her. As she leaped the fence, the man seed her foots, and, lo and beholds, they was wolf foots!

Man, he holler out, "You ought to wear shoes when you come a-milking the red cow!" and with that, the old Witch-Wolf give a twist, and fetched a yell, and made a disappearance in the elements.

It ain't no use! They may fool folks, but cows knows wild critters by their smell.