C046. Rabbit Comes to the Party

12. Brother Rabbit Breaks Up a Party. Text Source: Nights with Uncle Remus by Joel Chandler Harris. Online at Project Gutenberg. I have removed the frame material and standardized the spelling; click here for the original spelling plus all notes to the story.


BRE RABBIT COMES to the PARTY

One time, Brer Fox, he took and ask some of the other critters to he house. He ask Brer Bear, and Brer Wolf, and Brer Coon, but he ain't ask Brer Rabbit. All the same, Brer Rabbit got wind of it, and he allow that if he don't go, he expect he have much fun as the next man.

The critters what get the invite, they took and assemble at Brer Fox house, and Brer Fox, he ask 'em in and got 'em chairs, and they sat there and laugh and talk, till, by and by, Brer Fox, he fetch out a bottle of dram and lay her out on the side-board, and then he sort of step back and say, says he, "Just step up, gentlemens, and help yo'self,' and you better believe they help theirself.

Whiles they was drinking and dramming and going on, what you expect Brer Rabbit doing? You just well make up your mind that Brer Rabbit monstrous busy, 'cause he was sailing 'round fixing up his tricks. Long time before that, Brer Rabbit had been at a barbecue where there was a muster, and whiles all the folks was down at the spring eating dinner, Brer Rabbit he crept up and run off with one of the drums. There was a big drum and a little drum, and Brer Rabbit he snatch up the littlest one and run home. 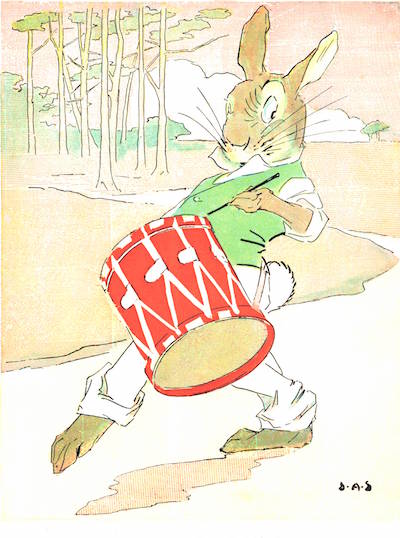 By and by Brer Coon, which he always got one ear hung out for the news, he up and ask Brer Fox what that, and by that time all the critters stop and listen; but all the same, here come Brer Rabbit: Diddybum, diddybum, diddybum-bum-bum—diddybum! 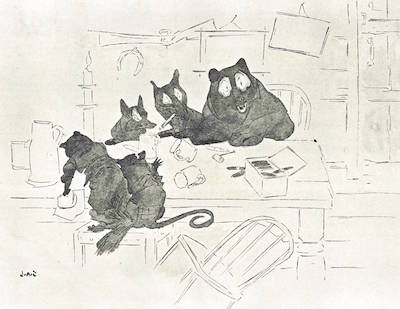 The critters they keep on listening, and Brer Rabbit keep on getting nigher, till by and by Brer Coon reach under the chair for he hat, and say, says he, "Well, gents, I expect I better be goin'. I told my old woman that I won't be gone a minute, an' here it is 'way along in the day.'

With that Brer Coon, he skip out, but he ain't get much further than the back gate, before here come all the other critters like they was running a foot-race, and old Brer Fox was working in the lead. Yes sir! There they was, and there they went. They took nigh cuts, and they scramble over one another, and they ain't rest till they get in the bushes.

Old Brer Rabbit, he came on down the road—diddybum, diddybum, diddybum-bum-bum—en bless gracious! When he get to Brer Fox house there ain't nobody there. Brer Rabbit is that audacious, that he hunt all 'round till he find the air-hole in the drum, and he put his mouth to that and sing out, says he, "Is there anybody home?' and then he answer hisself, says he, "Lord, no, honey—folks all gone."

With that, old Brer Rabbit break loose and laugh, he did, fit to kill hisself, and then he slam Brer Fox front gate wide open, and march up to the house. When he get there, he kick the door open and hail Brer Fox, but nobody ain't there, and Brer Rabbit he walk in and take a chair, and make hisself at home with putting his foots on the sofa and spitting on the floor.

Brer Rabbit ain't sat there long before he catch a whiff of the dram, and then he see it on the side-board, and he step up and drop about a tumbler full somewheres down in the neighborhoods of the goozle. Brer Rabbit mighty like some folks I knows. He took one tumbler full, and it weren't long before he took another one, and when a man do this a-way, he pleased to get drammy.

All this time the other critters was down in the bushes listening for the diddybum, and making ready for to light out from there at the drop of a hat. But they ain't hear no more fuss, and by and by Brer Fox, he say he going back and look after he plunder, and the other critters say they believe they'll go along with him.

They start out, they did, and they crept towards Brer Fox house, but they crept mighty careful, and I bound if somebody'd've shook a bush, them there critters would've naturally tore up the earth getting away from there. Yet they still ain't hear no fuss, and they keep on creeping till they get in the house.

When they get in there, the first sight they see was old Brer Rabbit standing up by the dram-bottle mixing up a toddy, and he weren't so stiff-kneed neither, 'cause he sort of swayed from side to side, and he look like he mighty limbersome, which, goodness knows, a man pleased to be limbersome when he drink that kind of liquor what Brer Fox provide for them critters. 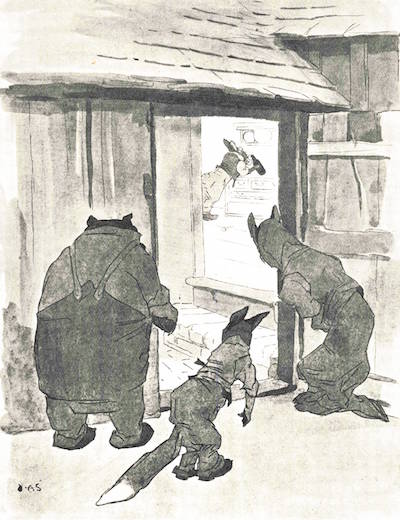 When Brer Fox see Brer Rabbit making free with he doings that a-way, what you expect he do? He stand there, Brer Fox did, and he watch Brer Rabbit motions. By and by he holler out, says he, "Ah yi, Brer Rabbit!' says he. "Many a time is you made yo' escape, but now I got you!" and with that, Brer Fox and the other critters close in on Brer Rabbit.

Seem like I done told you that Brer Rabbit done gone and took more dram than what was good for he wholesome. Yet he head ain't swim so bad that he don't know what he doing, and time he lay eyes on Brer Fox, he know he done got in close quarters. Soon as he see this, Brer Rabbit make like he been down in the cup more deeper than what he is, and he stagger 'round like town gal standing in a batteau, and he seem like he just as limber as a wet rag. He stagger up to Brer Fox, he did, and he roll he eyeballs 'round, and slap him on he back and ask him how he ma. Then when he see the other critters, he holler out, he did:

Old Brer Rabbit talk so curious that the other critters have more fun than what you can shake a stick at, but by and by Brer Fox say they better get down to business, and then they all close in on Brer Rabbit, and there he was.

In them days, old man Bear was a judge 'mongst the critters, and they all ask him what they going do along with Brer Rabbit, and Judge Bear, he put on his specs, and clear up his throat, and say that the best way to do with a man what kick up such a racket, and run the neighbors out of their own house, and go in there and levy on the pantry, is to take him out and drown him; and old Brer Fox, which he sitting on the jury, he up and smack he hands together, and cry, and say, says, that after this he pleased to believe that Judge Bear done got all-under hold on the lawyer-books, 'cause that exactly what they say when a man levy on he neighbor pantry.

Then Brer Rabbit, he make out he scared, and he holler and cry, and beg 'em, in the name of goodness, don't fling him in the spring branch, 'cause they all know he don't know how to swim: but if they pleased for to pitch him in, then for mercy sake give him a walking-cane, so he can have something to hold to whiles he drowning.

Ole Brer Bear scratch his head and say, says he, that, far as his remembrance go back, he ain't come across nothing in the lawyer-book to the contraries of that, and then they all agree that Brer Rabbit can have a walking-cane.

With that, they catch up Brer Rabbit and put him in a wheelbarrow and cary him down to the branch, and fling him in. They fling him in, and Brer Rabbit light on he foots, same as a tomcat, and pick his way out by the helps of the walking-cane. The water was that shallow that it don't more than come over Brer Rabbit slipper, and when he get out on the other side, he holler back, says he, "So long, Brer Fox!"