22. How Brother Rabbit Frightened His Neighbors. Text Source: Nights with Uncle Remus by Joel Chandler Harris. Online at Project Gutenberg. I have removed the frame material and standardized the spelling; click here for the original spelling plus all notes to the story.

In them days, the critters was same like folks. They had their ups and they had their downs; they had their hard times, and they had their soft times. Some seasons their crops'd be good, and some seasons they'd be bad. Brer Rabbit, he fared like the rest of 'em. What he'd make, that he'd spend. One season he took and made a fine chance of goobers, and he allow, he did, that if they fetch him anywheres nigh the money what he expect they would, he go to town and buy the truck what neccessity call for.

He ain't no sooner say that than old Miss Rabbit, she vow, she did, that it be a scandal and a shame if he don't whirl in and get seven tin cups for the chilluns for to drink out of, and seven tin plates for 'em for to sop out of, and a coffee-pot for the family. Brer Rabbit say that just exactly what he gonna do, and he allow, he did, that he going to town the coming Wednesday.

Brer Rabbit weren't more than out of the gate before Miss Rabbit, she slap on her bonnet, she did, and rush 'cross to Miss Mink house, and she ain't been there a minute before she up and tell Miss Mink that Brer Rabbit done promise to go to town Wednesday coming and get the chilluns something. Course, when Mr. Mink come home, Miss Mink she up and allow she want to know what the reason he can't buy something for his chilluns same as Brer Rabbit do for his, and they quarrel and quarrel just like folks.

After that Miss Mink she carry the news to Miss Fox, and then Brer Fox he took and got a raking over the coals.

Miss Fox she tell Miss Wolf, and Miss Wolf she tell Miss Bear, and it weren't long before everybody in them diggings know that Brer Rabbit going to town the coming Wednesday for to get his chilluns something; and all the other critters' chilluns ask their ma what the reason their pa can't get them something. So there it went.

Brer Fox, and Brer Wolf, and Brer Bear, they make up their minds, they did, that if they going to catch up with Brer Rabbit, that was the time, and they fix up a plan that they'd lay for Brer Rabbit and nab him when he come back from town. They took and make all their arrangerments, and wait for the day.

Sure enough, when Wednesday come, Brer Rabbit et he breakfast before sun-up, and put out for town. He took and got hisself a dram, and a plug of tobacco, and a pocket-handkerchief, and he got the old woman a coffee-pot, and he got the chillun seven tin cups and seven tin plates, and then towards sundown he start back home. He walk along, he did, feeling mighty biggity, but by and by when he get sort of tired, he sat down under a black-jack tree, and begun to fan hisself with one of their platters.

Whiles he doing this a little bit of teenchy sap-sucker run up and down the tree and keep on making mighty queer fuss. After while Brer Rabbit took and shoo at him with the platter. Seem like this make the teenchy little sap-sucker mighty mad, and he rush out on a limb right over Brer Rabbit, and he sing out:
Pilly-pee, pilly-wee!
I see what he no see!
I see, pilly-pee,
I see, what he no see!

With that, old man Rab took and put he truck in the bushes, and then he run 'way 'round for to see what he can see. Sure enough, when Brer Rabbit get over against the big gully down in the holler, there they was. Brer Fox, he was on one side of the road, and Brer Wolf was on the the other side; and old Brer Bear he was curled up in the gully taking a nap.

Brer Rabbit, he took and peep at 'em, he did, and he lick he foot and roach back he hair, and then hold his hands 'cross he mouth and laugh. Brer Rabbit, he seed 'em all there, and he took and grin, he did, and then he lit out to where he done left he truck, and when he get there he dance 'round and slap hisself on the leg, and make all sorts of curious motions. Then he go to work and turn the coffee-pot upside down and stick it on he head; then he run he gallus through the handles of the cups, and sling 'em cross he shoulder; then he divide the platters, some in one hand and some in the other. After he get good and ready, he crept to the top of the hill, he did, and took a running start, and flew down like a hurricane—rickety, rackety, slambang!

Bless your soul, them critters ain't hear no fuss like that, and they ain't seed no man what look like Brer Rabbit do, with the coffee-pot on he head, and the cups a-rattling on he gallus, and the platters a-waving and a-shining in the air.

Now, mind you, old Brer Bear was laying off up the gully taking a nap, and the fuss scare him so bad that he make a break and run over Brer Fox. He rush out in the road, he did, and when he see the sight, he whirl 'round and run over Brer Wolf. With their scrambling and their scuffling, Brer Rabbit got right on 'em before they can get away. He holler out, he did, "Gimme room! Turn me loose! I'm old man Spewter-Splutter with long claws, and scales on my back! I'm snaggle-toothed and double-jointed! Gimme room!" 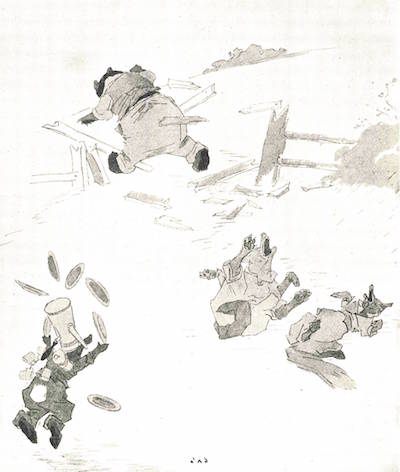 Every time he'd fetch a whoop, he'd rattle the cups and slap the platters together—rickety, rackety, slambang! And I let you know when them critters got they limbs together they split the wind, they did that. old Brer Bear, he struck a stump what stand in the way, and I ain't gonna tell you how he tore it up 'cause you won't believe me, but the next morning Brer Rabbit and his chilluns went back there, they did, and they got enough splinters for to make 'em kindling wood all the winter. 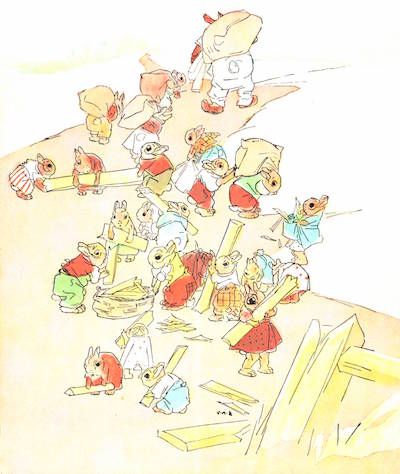