2. Brother Rabbit's Frolic. Text Source: Uncle Remus and Brer Rabbit by Joel Chandler Harris. Online at Project Gutenberg. I have removed the frame material and standardized the spelling; click here for the original spelling plus all notes to the story.

Brer Rabbit had a mighty quick thinking apparatus, and most in generally, all the time, the pranks he played on the other critters pestered 'em both ways a-coming and a-going. The dogs done mighty well, along as they had dealings with the small fry, like Brer Fox, and Brer Coon, and Brer Wolf, but when they run against old Brer Bear, they sure struck a snag. The most servigorous was the identical one that got the worst hurted. He got too close to Brer Bear, and when he look at hisself in running water, he took notice that he was split wide open from flank to dewlap. 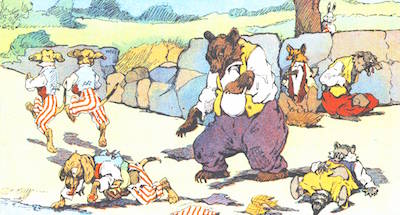 
After the ruckus was over, the critters hobbled off home the best they could, and laid 'round in sun and shade for to let their cuts and gashes get good and well. When they got so they could segashuate and pay their party calls, they agree for to assemble somewheres, and hit on some plan for to outdo Brer Rabbit.

Well, they had their assembly, and they jowered and jowered; but, by and by, they agreed upon a plan that look like it might work. They agree for to make out that they going to have a dance. They knowed that old Brer Rabbit was always keen for that, and they say they'll give him a invite, and when he got there, they'd ask him for to play the fiddle, and if he refuse, they'll close in on him and make way with him. 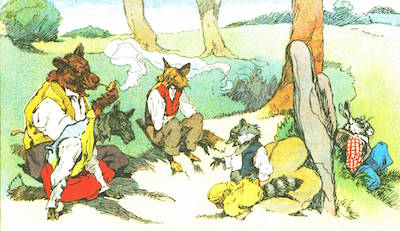 
So far, so good! But all the time they was jowering and confabbing, old Brer Rabbit was sitting in a shady place in the grass, a-hearing every word they say. When the time come, he crept out, he did, and run around, and the first news they knowed, here he come down the big road — bookity-bookity — same as a hoss that's broke through the pasture fence. 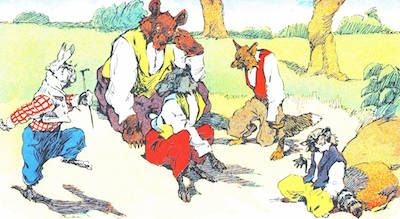 
He say, says he, "Why, hello, friends! and howdy, too, 'cause I ain't seed you all since the last time! Where the name of goodness is you been there odd-come-shorts? And how did you fare at the barbecue? If my two eyeballs ain't gone and got crooked, there's old Brer Bear, him of the short tail and sharp tooth — the very one I'm a-hunting for! And there's Brer Coon! I sure is in big luck. There's going to be a big frolic at Miss Meadows', and her and the gals want Brer Bear for to show 'em the roasting-ear shuffle; and they put Brer Coon down for the jig they calls rackback Davy. I'm to play the fiddle — something I ain't done since my oldest gal had the mumps and the measles, both the same day and hour! Well, this morning I took down the fiddle from where she was a-hanging at, and drawed the bow backwards and forwards a time or two, and then I shut my eyes and it some of the old-time tunes, and when I come to myself, there was my whole blessed family skipping and sashaying 'round the room, spite of the fact that breakfast was to be cooked!" 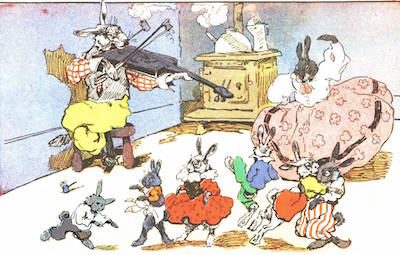 With that, Brer Rabbit bowed, he did, and went back down the road like the dogs was after him. 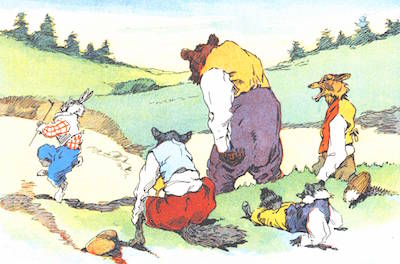 
The critters ain't had no dance, and when they went to Miss Meadows', she put her head out the window, and say if they don't go off from there she'll have the law on 'em! 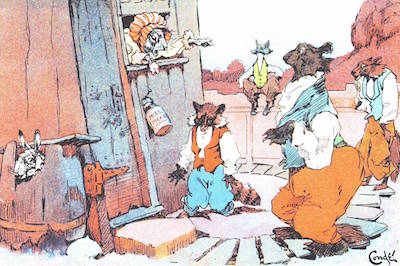