It come about that soon one morning towards the fall of the year, Brer Rabbit was stirring 'round in the woods after some bergamot for to make him some hair-grease. The wind blow so cold that it make him feel right frisky, and every time he hear the bushes rattle he make like he scared. He was going on this a-way, hoppity-skippity, when by and by he hear Mr. Man cutting on a tree way off in the woods. He fetch up, Brer Rabbit did, and listen first with one year and then with the other.

Man, he cut and cut, and Brer Rabbit, he listen and listen. By and by, whiles all this was going on, down come the tree—kubber-lang-bang-blam! Brer Rabbit, he took and jump, and let alone that, he make a break, he did, and he leaped out from there like the dogs was after him.

Well, then, Brer Rabbit run till he get sort of het up like, and just about the time he making ready for to squat and catch he wind, who should he meet but Brer Coon going home after setting up with old Brer Bull-Frog. Brer Coon see him running, and he hail him.

"What yo' hurry, Brer Rabbit?"

"Do pray, Brer Rabbit, tell me the news!"

"Mighty big fuss back there in the woods. Ain't got time to tarry!"

This make Brer Coon feel mighty skittish, 'cause he far ways from home, and he just leaped out, he did, and went a-boiling through the woods. Brer Coon ain't gone far till he meet Brer Fox.

"Hey, Brer Coon, where you going?"

"Going to the doctor?"

"Mighty queer racket back there in the woods! Ain't got time to tarry!"

With that, Brer Fox leaped out, he did, and fairly split the wind. He ain't gone far till he meet Brer Wolf.

"Who been want the doctor?"

"Mighty curious fuss back there in the woods! Ain't got time to tarry!"

With that, Brer Wolf shuck hisself loose from the face of the earth, and he ain't get far till he meet Brer Bear. Brer Bear he ask, and Brer Wolf make answer, and by and by Brer Bear he fetch a snort and runned off; and, bless gracious! It weren't long before the last one of the critters was a-skaddling through the woods like the Old Boy was after 'em—and all 'cause Brer Rabbit hear Mr. Man cut tree down.

When the critters come to make inquirements amongst one of another about who start the news, it went right spang back to Brer Rabbit, but, lo and beholds! Brer Rabbit ain't dar, and it turn out that Brer Coon is the man what seed him last. Then they got to laying the blame of it on one another, and little more and they'd a fit there scandalous, but old Brer Terrapin, he up and allow that if they want to get the straight of it, they better go see Brer Rabbit. 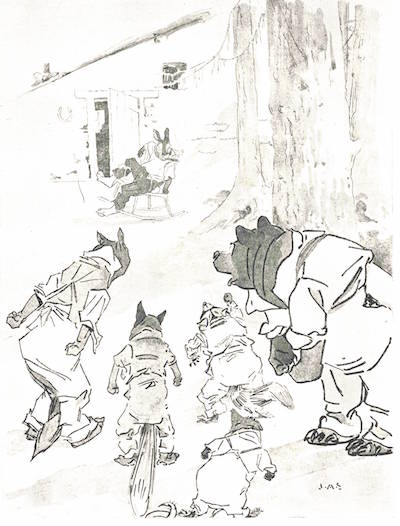 All the critters was agreeable, and they put out to Brer Rabbit house. When they get there, Brer Rabbit was a-sitting cross-legged in the front porch winking he eye at the sun. 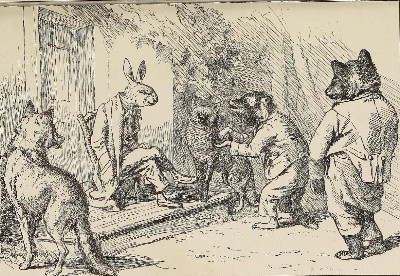 Brer Bear, he speak up, "What make you fool me, Brer Rabbit?"

"This here the first time I seed you this day, Brer Bear, an' you are more than welcome to that."

They all ask him and get the same answer, and then Brer Coon put in, "What make you fool me, Brer Rabbit?" 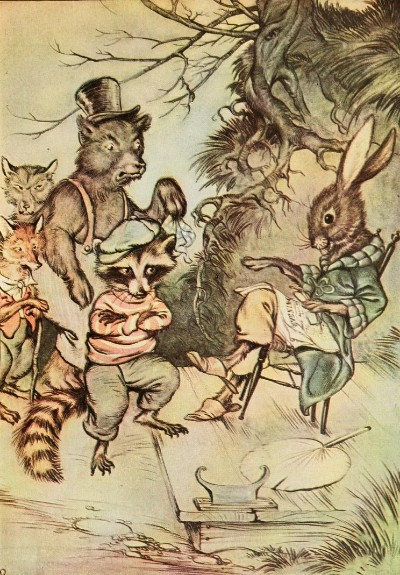 "You make like there was a big racket, Brer Rabbit."

"There surely was a big racket, Brer Coon."

"Ah-yi! You ought to ask me that first, Brer Coon."

"I askes you now, Brer Rabbit."

Course this make Brer Coon feel like a natural-born slink, and it weren't long before all the critters make their bow to Brer Rabbit and mosey off home.

Brer Rabbit was a mighty man in them days.