19. The Fate of Mr. Jack Sparrow. Text Source: Uncle Remus, His Songs and His Sayings by Joel Chandler Harris. Online at Project Gutenberg. I have removed the frame material and standardized the spelling; click here for the original spelling plus all notes to the story.


THE FATE OF MR. JACK SPARROW

There ain't no way for to make tattlers and talebearers turn out good. No, there ain't. I been mixing up with folks now going on eighty year, and I ain't seed no tattler come to no good end. That I ain't. And if old man Methuselah was living clean till yet, he'd up and tell you the same.

You remember what become of the bird what went tattling 'round about Brer Rabbit? It was one of these here uppity little Jack Sparrows, I expect. They was always bothering longer other folks's business, and they keeps at it down to this day—pecking here, and picking there, and scratching out yonder.

Leastways, he was sitting out there by hisself, and there he sat, and study and study, till by and by he jump up and holler out, "Well, dog-gone my cats if I can't gallop 'round old Brer Fox, and I'm going to do it. I'll show Miss Meadows and the gals that I'm the boss of Brer Fox," says he. 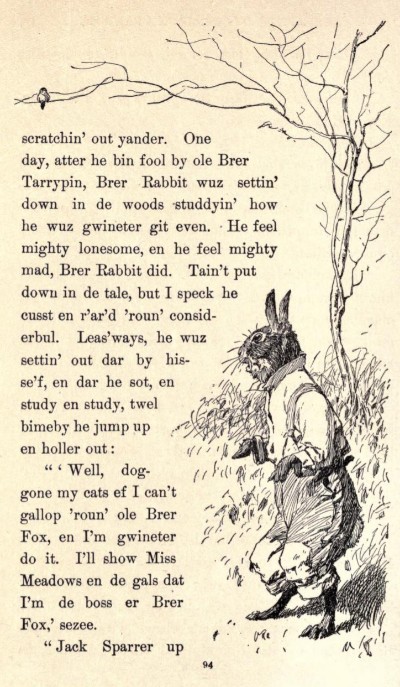 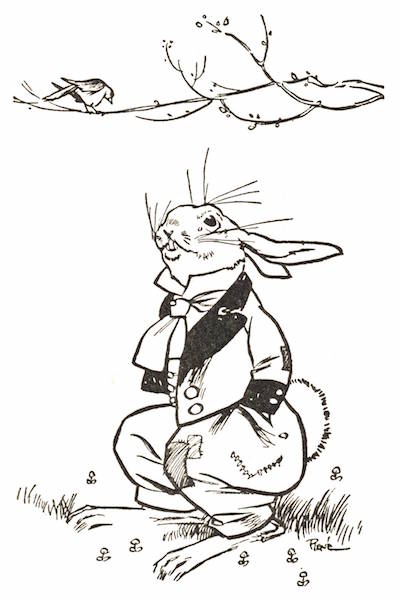 This kind of terrify Brer Rabbit, and he scarcely know what he gonna do; but by and by he study to hisself that the man what see Brer Fox first was bound to have the inturn, and then he go hopping off towards home.

He didn't got far when who should he meet but Brer Fox, and then Brer Rabbit, he open up. "What this 'twixt you and me, Brer Fox?" says Brer Rabbit, says he. "I hear tell you goin' to send me to instruction, and nab my family, and destroy my shanty," says he.

Then Brer Fox he get mighty mad. "Who been telling you all this?" says he.

Brer Rabbit make like he didn't want to tell, but Brer Fox he insist and insist, till at last Brer Rabbit he up and tell Brer Fox that he hear Jack Sparrow say all this.

"Course," says Brer Rabbit, says he, "when Brer Jack Sparrow tell me that I flew up, I did, and I use some language which I'm mighty glad there weren't no ladies 'round nowheres so they could hear me go on," says he.

Brer Fox he sort of gape, he did, and say he expect he better be sauntering on. But, bless your soul, Brer Fox ain't saunter far, before Jack Sparrow flap down on a persimmon-bush by the side of the road, and holler out, "Brer Fox! Oh, Brer Fox!—Brer Fox!"

Brer Fox he just sort of canter long, he did, and make like he don't hear him.

Then Jack Sparrow up and sing out again, "Brer Fox! Oh, Brer Fox! Hold on, Brer Fox! I got some news for you. Wait, Brer Fox! It'll astonish you."

Brer Fox he make like he don't see Jack Sparrow, nor neither do he hear him, but by and by he lay down by the road, and sort of stretch hisself like he fixing for to nap. The tattling Jack Sparrow he flewed along, and keep on calling Brer Fox, but Brer Fox, he ain't saying nothing. 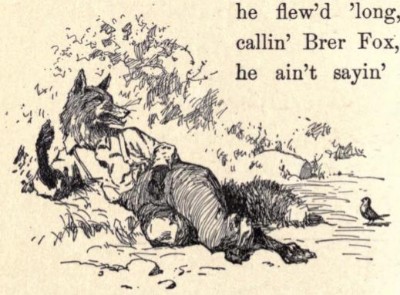 Then little Jack Sparrow, he hop down on the ground and flutter 'round amongst the trash. This sort of attract Brer Fox attention, and he look at the tattling bird, and the bird he keep on calling, "I got somethin' for to tell you, Brer Fox."

Then the little bird he up and hop on Brer Fox's tail. 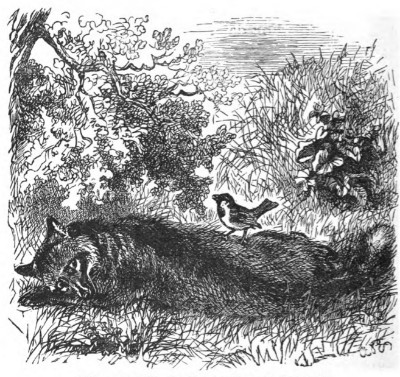 "Get on my back, little Jack Sparrow, 'cause I'm deaf in one ear and I can't hear out of the other."

Then the little bird hop on his back. 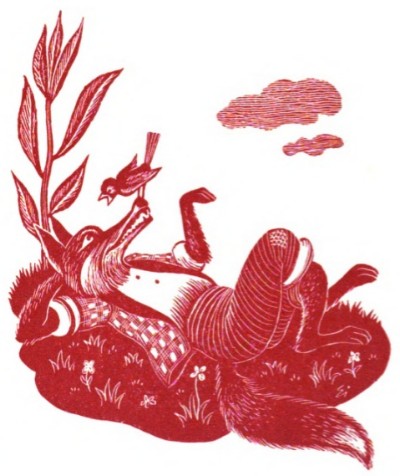 "Hop on my head, little Jack Sparrow, 'cause I'm deaf in both ears."

Up hop the little bird.

"Hop on my tooth, little Jack Sparrow, 'cause I'm deaf in one ear and I can't hear out of the other."

The tattling little bird hop on Brer Fox's tooth, and then...

Judge Bear come long next day, and he find some feathers, and from that word went round that old man Squinch Owl done caught another whatshisname. 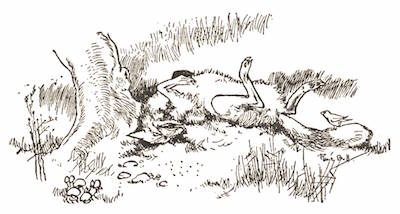