C070. Brer Wolf and the Witch-Rabbit

36. Brother Wolf Falls a Victim. Text Source: Nights with Uncle Remus by Joel Chandler Harris. Online at Project Gutenberg. I have removed the frame material and standardized the spelling; click here for the original spelling plus all notes to the story.


BRER WOLF and the WITCH-RABBIT

They fix up their plans, they did, and it weren't so mighty long 'fore Brer Rabbit run into Brer Wolf house in a mighty big hurry, and he allow, he did, "Brer Wolf! O Brer Wolf! I just now come from the river, an' just as sure as you are sittin' in that chair, old Big-Money layin' there stone dead. Let's we go eat her up."

"Brer Rabbit, surely you are jokin'!" 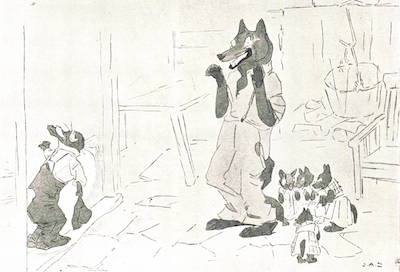 "Brer Rabbit, is you sure she dead?"

And go they did. They went 'round and they got all the other critters, and Brer Wolf, living so nigh, he let all he chilluns go, and it weren't so mighty long 'fore they had a crowd there just like camp-meeting times.

When they get there, sure enough, there lay old Big-Money all stretch out on the river bank. This make Brer Wolf feel mighty good, and he took and stick he hands in he pocket and strut 'round there and look monstrous biggity. After he done took and examine old Big-Money much as he want to, he up and allow, he did, that they better sort of rustle 'round and make a fair division. He ask Brer Mink, he ask Brer Coon, he ask Brer Possum, he ask Brer Terrapin, he ask Brer Rabbit, which part they take, and they all up and allow, they did, that being as Brer Wolf the biggest and the heartiest in the neighborhoods of the appetite, they expect he better take the first choosement.

With that Brer Wolf, he sat down on a log, and hang he head to one side, sort of like he ashamed of hisself. By and by, he up and allow, "Now, then, folks an' friends, since you shove it on me, the shortest way is the best way. Brer Coon, we been good friends a mighty long time; how much of this here meat ought a feeble old man like me to take?" says he.

Brer Wolf talk mighty loving. Brer Coon snuff the air, and allow, "I 'spect you better take one of the fore-quarters, Brer Wolf," says he.

Brer Wolf look like he astonished. He lift up he hands, and allow, "Lordy, Brer Coon, I took you to be my friend, that I did. Man what talk like that ain't got no feelin' for me. It make me feel mighty lonesome," says he.

Then Brer Wolf turn 'round and talk mighty loving to Brer Mink, "Brer Mink, many's the day you been a-knowin' me; how much of this here meat you 'spect ought to fall to my share?" says he.

Brer Mink sort of study, and then he allow, "Bein' as you are such a nice man, Brer Wolf, I 'spect you ought to take one of the fore-quarters, and a right smart hunk off of the bulge of the neck," says he.

Brer Wolf holler out, he did, "Go 'way, Brer Mink! Go 'way! You ain't no acquaintance of mine!"

Then old Brer Wolf turn 'round to Brer Possum and talk loving, "Brer Possum, I done been took with a likin' for you long time 'fore this. Look at me, and then look at my family, and then tell me, if you be so good, how much of this here meat goin' to fall to my share."

Brer Possum, he look 'round, he did, and grin, and he up and allow, "Take half, Brer Wolf, take half!"

Then old Brer Wolf holler out, "Shoo, Brer Possum! I like you no more."

Then he up and ask Brer Rabbit, and Brer Rabbit, he took and respond, he did, "Gentlemens all! You see Brer Wolf chillun? Well, they are all monstrous hungry, an' Brer Wolf hungry hisself. Now I puts this plan straight at you: let's we all let Brer Wolf have the first pass at Big-Money; let's tie him on there, an' let him eat much as he want to, an' then we can pick the bones," says he. 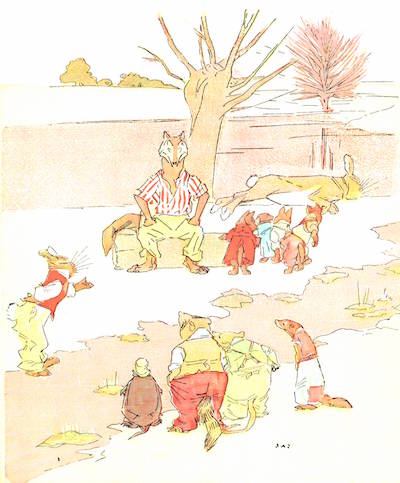 "You are my partner, Brer Rabbit!" says Brer Wolf, says he; "you are my honey-partner!"

They all agree to this plan, more specially old Brer Wolf, so then they took and tie him onto Big-Money. They tie him on there, they did, and then old Brer Wolf look all 'round and wunk at the others. Brer Rabbit, he took and wunk back, and then Brer Wolf reach down and bite Big-Money on the back of the neck. Course, when he do this, Big-Money pleased to flinch; let alone that, she pleased to jump.

Brer Wolf holler out, "Ow! Run here, somebody! Take me off! She ain't dead! O Lordy! I feel her move!"

Brer Rabbit holler back, "Never mind the flinchin', Brer Wolf. She done dead; I done hear her say so herself. She dead, sure. Bite her again, Brer Wolf, bite her again!"

Brer Rabbit talk so stiff, it sort of took the chill off of Brer Wolf, and he dipped down and bit old Big-Money again. With that, she begun to move off, and Brer Wolf he holler just like the woods done catch a-fire, "Ow! O Lordy! Untie me, Brer Rabbit, untie me! She ain't dead! Ow! Run here, Brer Rabbit, and untie me!"

Brer Rabbit, he holler back, "She surely dead, Brer Wolf! Nail her, Brer Wolf! Bite her! Gnaw her!"

Brer Wolf keep on biting, and Big-Money keep on moving off. By and by, she get to the bank of the river, and she fall in—cumberjoom!—and that was the last of Brer Wolf. And Brer Rabbit, he just went off somewheres by he own-alone self and took a big laugh.