23: Brother Mud Turtle's Trickery. Text Source: Uncle Remus and His Friends by Joel Chandler Harris. Online at Hathi Trust. I have removed the frame material and standardized the spelling; click here for notes to the story.

I get to running on in my mind about old Brer Fox and old Brer Mud Turtle. They had some kind of falling out once upon a time. I don't know what. I expect it's got a tale hung on it, but the tale done switch itself out of my mind. Yet they'd done had a falling out, and there weren't no love lost betwixt 'em.

Well, sir, one day Brer Fox was going down the creek fishing. Little as you may think of it, Brer Fox was monstrous fond of fishes, so every chance he got he'd go fishing. He ain't got no bait, and no pole, and no hook. He just went down the creek, and when he come to a good place, he'd wade in and feel under the rocks and under the bank. Sometimes he'd catch a horny-head, and then again he'd catch a perch.

Well, sir, he went on and went on, and he had bad luck. Look like the fishes was all gone from home, but he kept on, and kept on. He allow to hisself that he pleased to have some fish for dinner. One time he put his hand in a crawfish nest and got nipped, and another time he touched a eel, and it made the cold chills run across him. Yet he kept on.

By and by Brer Fox come to where old Brer Mud Turtle live at. I don't know what make old Brer Mud Turtle live in such a damp place like that. Look like him and his folks'd have a bad cold the whole blessed time. But there he was in the water under the bank, laying there fast asleep, dreaming about the good times he'd have when the freshet come. He was laying there with his eyes shut, when the first news he know he feel something or other fumbling 'round his head. It weren't nobody but old Brer Fox feeling 'round under the bank for fishes.

Well, sir, he shut down on old Brer Fox, and if you'd've been anywheres in that settlement you'd've heard squalling then if you ain't never hear none before. Brer Fox just held his head back and holler, "Ouch! Ouch! What this got me? Ouch! Turn me a-loose! Ouch! Somebody better run here quick! Lords-a-mercy! Ouch!"

But Brer Mud Turtle, he held on, and he feel so much comfort that he'd've about went to asleep again if Brer Fox hadn't've snatched and jerked so hard and a-hollered so loud.

Well, sir, when they got out on the bank and Brer Mud Turtle sort of woke up, he took and turn Brer Fox loose without waiting for the thunder. He ask Brer Fox pardon, but Brer Fox, he ain't got no pardon for to give him. 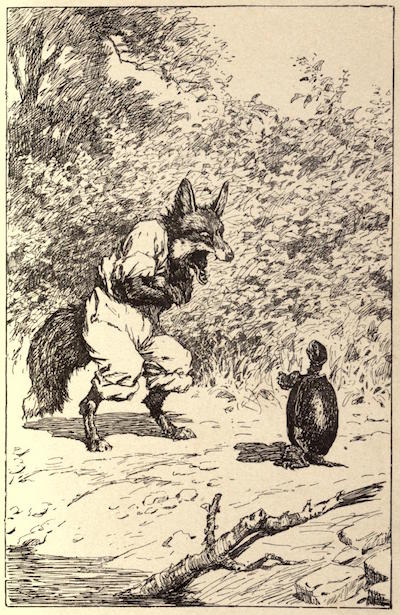 Brer Mud Turtle make like he scared. He allow, "I declare to gracious, Brer Fox! If I'd've knowed it was you, I'd've never shut down on you in the round world; 'cause I know what a dangersome man you is. I knowed your daddy before you, and he was a dangersome man."

But Brer Fox refuse to listen to that kind of talk. He say, "I been wanting you a long time, and now I got you. I got you right where I want you, and when I get through with you, your own folks would n't know you, if they was to meet you in the middle of the road."

Brer Mud Turtle allow, "Supposing I ain't got no hide on me — then what you going to do?"

Brer Fox grit his tooths. He say, "If you ain't got no hide, I'll find the place where the hide ought to be — that's what!"

Old Brer Mud Turtle talk at him. He allow, "Hard ain't no name for it, Brer Fox! You'll be jimber-jawed long 'fore you gnaw through my hide!"

Brer Fox gnaw and gouge, and gouge and gnaw.

Brer Mud Turtle allow, "There ain't but one way for to get that shell off, Brer Fox!"

Brer Fox refuse to make answer. He gouge and gnaw, and gnaw and gouge.

Brer Fox gnaw and gouge, and gouge and gnaw, and bu and by he get tired, more specially when he hear old Brer Mud Turtle laying in there snoring just like somebody sawing gourds. Then he sat down and watch Brer Mud Turtle, but he ain't move. He do just like he sleep.

Then Brer Fox get the idea that he'll play a trick on Brer Mud Turtle. He holler out, "Good-by, Brer Mud Turtle! You are too much for me this time. My hand hurt me so bad, I got to go home and get a poultice on it. But I'll pay you back if it's the last act!"

Brer Fox make like he going off, but he just run 'round and hid in the bushes. Yet does you expect he going fool Brer Mud Turtle? Shoo, honey! That critter got moss on his back, and he got so much sense in his head his eyes look red. He just lay there, old Brer Mud Turtle did, and sun hisself same as if he was on a rock in the creek. He lay there so still that Brer Fox got his impatience stirred up, and he come out the bushes and went to Brer Mud Turtle and shook him up and asked him how he going get the shell off.

Brer Fox say, "Don't riddle me no riddles. Up and tell me like a man how I going to get your shell off!"

Brer Mud Turtle allow, "Put me in the mud and rub my back hard as you can. Then the shell pleased to come off. That the reason they calls me Brer Mud Turtle."

Well, sir, Brer Fox ain't got no better sense than to believe all that truck, so he took and shove Brer Mud Turtle along till he got him in the mud, and then he begun to rub on his back like somebody currying a hoss. What happen den? Well, there ain't nothing at all happen, excepting what pleased to happen. The more he rub on the back, the deeper Brer Mud Turtle go in the mud. By and by, whiles Brer Fox was rubbing right hard, Brer Mud Turtle sort of give hisself a flirt and went down out of reach.

Course this make Brer Fox plunge in the water, and a little more and he'd a drowneded right then and there. He went out on the bank, he did, and whiles he sitting there drying hisself he knowed that Brer Mud Turtle was laughing at him, 'cause he can see the signs of it 'cause when Brer Fox see bubbles rising on the water and following after one another he pleased to know that Brer Mud Turtle down under there laughing fit to kill hisself.