C093. Brer Rabbit and Brer Fox on the Roof

59. Brother Rabbit Gets Brother Fox's Dinner. Text Source: Nights with Uncle Remus by Joel Chandler Harris. Online at Project Gutenberg. I have removed the frame material and standardized the spelling; click here for the original spelling plus all notes to the story.


BRER RABBIT AND BRER FOX ON THE ROOF

It runned 'cross my mind just like a rat along a rafter, the way old Brer Rabbit took and done Brer Fox. Apparently, after Brer Rabbit done went and put a steeple on top of he house, all the other critters want to fix up they house. Some put new cellars under 'em, some slapped on new window-blinds, some one thing and some another, but old Brer Fox, he took a notion that he'd put some new shingles on the roof.

Brer Rabbit, he took and hear tell of this, and nothing'd do but he must rack 'round and see how old Brer Fox getting on. When he get where Brer Fox house is, he hear a mighty lamming and a blamming and lo and beholds, there was Brer Fox setting straddle of the comb of the roof nailing on shingles just hard as he can.

Brer Rabbit cut he eye 'round and he see Brer Fox dinner sitting in the fence-corner. It was covered up in a brand new tin pail, and it look so nice that Brer Rabbit mouth begun to water time he see it, and he allow to hisself that he pleased to eat that dinner 'fore he go away from there.

With that, Brer Rabbit sort of pull he mustache, and allow that the time was when he was a mighty handy man with a hammer, and he ain't too proud for to whirl in and help Brer Fox out of the ruts.

Brer Fox allow he be mighty much obliged, and no sooner is he say that than Brer Rabbit snatched off he coat and leaped up the ladder, and set in there and put on more shingles in one hour than Brer Fox can put on in two.

Oh, he was a rattler — ole Brer Rabbit was. He was a rattler, man, just as sure as you are sitting there. There weren't no kind of work that Brer Rabbit can't put he hand at, and do it better than the next man.

Brer Rabbit allow to hisself, he did, that he don't know what the name of goodness make folks have such long tails for, and he push it out the way. He ain't no more than push it out of the way, 'fore here it come back in the way. Course, when that's the case that a soon man like Brer Rabbit get pestered in he mind, he pleased to make some kind of accidents somewheres.

Brer Rabbit, he shut first one eye and then the other and rub hisself on the forehead, and allow, "Surely I ain't nail your tail, Brer Fox; surely not. Look right close, Brer Fox, be careful. For goodness sake don't fool me, Brer Fox!"

Brer Fox, he holler, he squall, he kick, he squeal. "Lords a mercy, Brer Rabbit! You done nailed my tail. Unnail me, Brer Rabbit, unnail me!"

Brer Rabbit, he make for the ladder, and when he start down, he look at Brer Fox like he right down sorry, and he up and allow, he did, "Well, well, well! Just to think that I should of lammed a-loose and nail Brer Fox tail. I don't know when I hear tell of anything that make me feel so mighty bad; and if I hadn't've seed it with my own eyes I wouldn't've believed it scarcely — that I wouldn't!"

Brer Fox holler, Brer Fox howl, yet it ain't do no good. There he was with he tail nail hard and fast.

Brer Rabbit, he keep on talking whiles he gonna down the ladder. "It make me feel so mighty bad," says he, "that I don't know what to do. Time I hear tell of it, it make a empty place come in my stomach," says Brer Rabbit, says he.

By this time Brer Rabbit done get down on the ground, and whiles Brer Fox hollering, he just keep on a-talking. "There's a mighty empty place in my stomach," says he, "and if I ain't runned into no mistakes there's a tin-pail full of vittles in this here fence-corner that'll just about fit it," says old Brer Rabbit, says he. 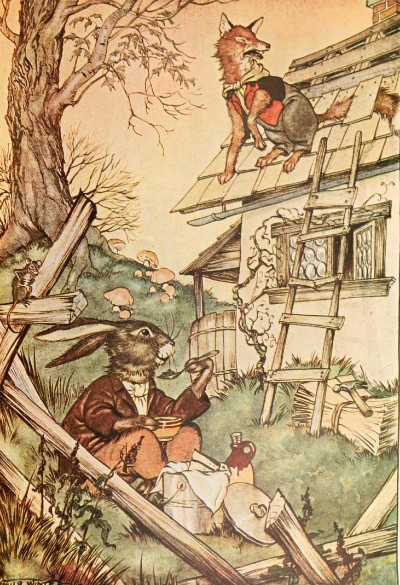 He open the pail, he did, and he eat the greens, and sop up the molasses, and drink the pot-liquor, and when he wipe he mouth upon he coat-tail, he up and allow, "I don't know when I been so sorry about anything as I is about Brer Fox nice long tail. Surely, surely my head must've been wool-gethering when I took and nail Brer Fox fine long tail," says old Brer Rabbit, says he.

With that, he took and skip out, Brer Rabbit did, and it weren't long 'fore he was playing he pranks in some other parts of the settlement.