C172. The Story of Brother Fox and Little Mr. Cricket

6: The Story of Brother Fox and Little Mr. Cricket. Text Source: Uncle Remus and the Little Boy by Joel Chandler Harris. Online at Hathi Trust. I have removed the frame material and standardized the spelling; click here for notes to the story.

Well, you know Mr. Cricket ain't so mighty big, but he big enough forto make a heap of fuss in the world; some of the critters say that he made more fuss than he done good. I ain't disputing that, and I ain't agreeing with it, 'cause we are all here for something, good or bad, and we pleased for to follow our noses if we get anywhere at all, and if we don't fall down and get talked about, we may thank all the stars on the underside of the sky.

This Mr. Cricket I'm telling you about ain't never had no chance for to live in no chimney-jam. He stayed out in the bushes and the high grass, and he didn't do nothing in the round world but play on his fife and his fiddle; when he got tired of one, he'd turn to the other. 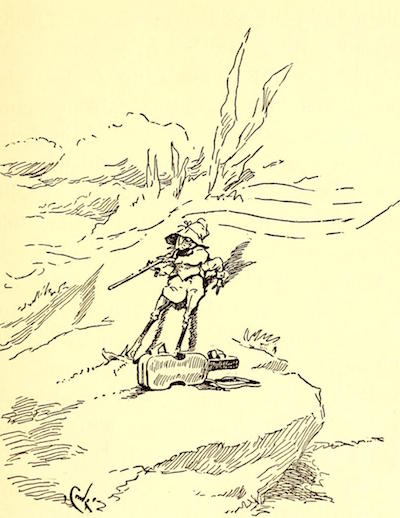 He done this spite of the fact that they'd had a mighty bad year; not much rain, but a mighty sight of thunder. When you get as old as Noah you'll know what I mean. Little Mr. Cricket went on this a-way till the cool nights and days begun to come on, and sometimes he had to warm hisself by getting under a clump of grass. But he was cheerful; he ain't dropped no sobs, and he ain't shed no sighs, and he kept on a-fluting and a-fiddling.

One day when the sun was shining kind of thankful like, he climbed on top of the tall grass, and fiddled away like somebody was frying meat. He hear some one coming, and he look right close, and, lo beholds! It was old Brer Fox. He allow, "Hello, Brer Fox! Where you goin'?"

Brer Fox kind of pull hisself up, and ask, "Who that?"

Little Mr. Cricket say, "It ain't nobody in the round world but me; I know I ain't much, but I'm mighty lively when the sun shines hot. Where you goin', Brer Fox?" 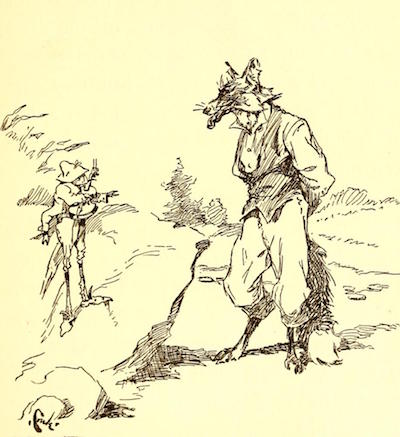 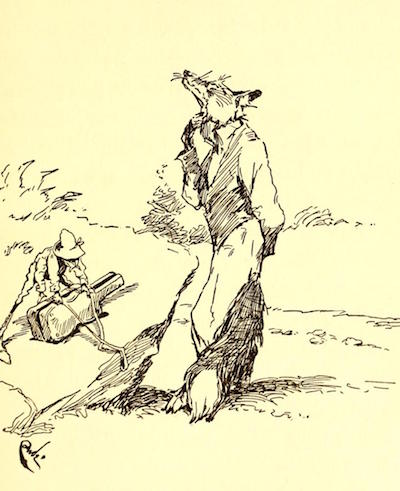 "Well, well!" says little Mr. Cricket, says he, "we all goes the way we're pushed by mind or hand, an' it takes a mighty little shove for to send us the way we're goin'. I used to belong to the rover family myself, but now I done settle down, an' don't do a thing in the world but have my own fun in my own way an' time. But since I seed you an' hear you talk so gayly, I done tuck a notion for take dinner in town myself."

Brer Fox allow, "How will you get there, little friend?"

Mr. Cricket say, "Ain't you never watched my motions? I got legs an' feet, an' I done caught the jumpin' habit from old Cousin Brown Grasshopper — the kind what crawls a little, walks a little, flies a little, an' hops like two-forty on the shell road. What time you 'spect for to get to town?"

Brer Fox respond, "Give me two good hours, an' I'll be right there with my appetite with me."

Little Mr. Cricket seem like he was astonished; he held up all his hands and mighty nigh all his footses. "Two hours! Well, by the time you get there, I'll done been had my dinner, an' ready for to take my nap."

Brer Fox grin at him, and allow, "If you'll beat me so much as ten inches, I'll provide yo' dinner, an' let you choosen yo' own provender. if I beat you, why, then you'll have to provide the dinner — a half grown lamb an' a suckling shote."

Little Mr. Cricket say he'll be more than glad for to fill out that program. And then Brer Fox, after grinning again, started off in a lope. But, just  before Brer Fox make his start, little Mr. Cricket made his; he took a flying jump and land on Brer Fox big bushy tail, and there he stayed.

When Brer Fox had been going a little more than a hour, he meet Brer Rabbit on the road, and they howdied. Brer Fox laugh and up and tell Brer Rabbit about the race 'twixt him and Mr. Cricket. Ole Brer Rabbit, he smole a smile and roll his eye balls; he do so funny that Brer Fox ask him what the nation is the matter with him.

Brer Rabbit say he was just thinking how Brer Fox'd feel for to find Mr. Cricket there before him. Brer Rabbit allow, "The cute little critter passed me on the road a quarter hour ago; if you are going to get there ahead of him, you'll have to whip up yo' hosses. What you been doing all this time? You must've fell asleep an' didn't know it."

Brer Fox pant and allow, "No, sir, I been coming full tilt all the time." 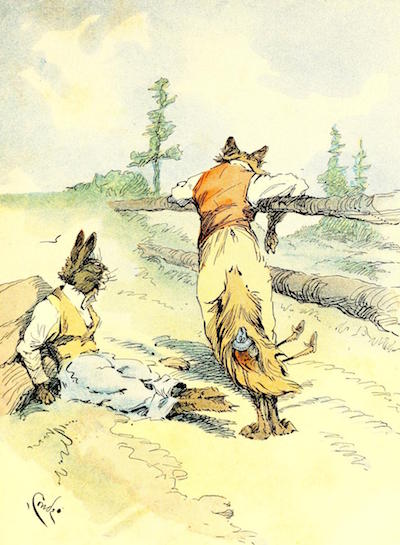 Brer Rabbit respond, "Then all I got for to say is that Mr. Cricket is got a mighty knack for getting over ground. I 'spect he done there by this time!"

"If he ain't," says Brer Fox, says he, "I'll catch him," and with that, he put out and went just as hard as he can; but fast as he went Mr. Cricket was going just as fast; — I don't know but what he had gone fast asleep in the soft bed where he was hiding at. 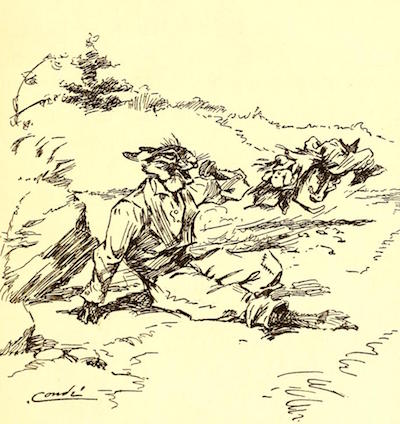 When Brer Rabbit see Brer Fox mend his gait, he just roll over and wallow in the sand, and laugh fit for to kill. He say to hisself, "I'm mighty glad I met my old friend, 'cause now I know that all the fools ain't dead — and long may they live for to give me something to do. I don't know how in the wide world I'd get along without 'em. They keeps me fat and sassy, whether crops is good or not." 'Cause when Brer Rabbit was looking Brer Fox over, his eye fell on little Mr. Cricket, and this what make he roll it so; he seed Mr. Cricket sitting up there just as snug as a bug in a rug, if you know how snug that is.

Well, the upshot of the whole business was that when Brer Fox got to town and come to the gate — they had towns walled in in them days — Mr. Cricket took a flying jump and landed on top where he could watch Brer Fox, and see what he going to do. 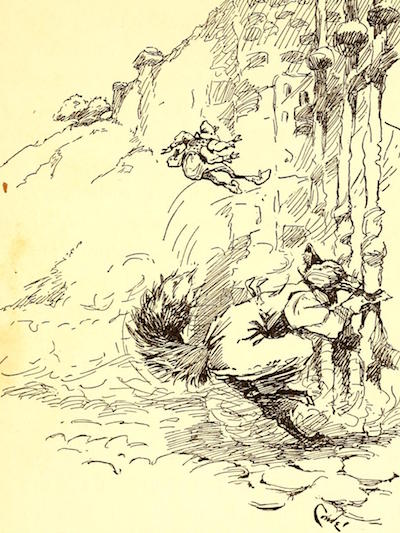 Brer Fox, he knock at the gate, and then walk up and down waiting for someone to open it.

Mr. Cricket, on top of the wall, holler out, "Heyo, Brer Fox! Where you been all this time? You must've stopped somewheres on the road for to get yo' dinner; an' I'm sorry, too. I done been had mine so long that I'm even about ready an' willing for to eat again. I had the idea, from what you said, that you was going to come on as hard as you could. You must've stopped on the way an' had a confab with Brer Rabbit; I met him on the way, an' it look like to me that he was ready for to pass the time of day with anybody that come along."

Brer Fox look like he was astonished. He say, "How in the wide world did you get here so quick, Mr. Cricket?" 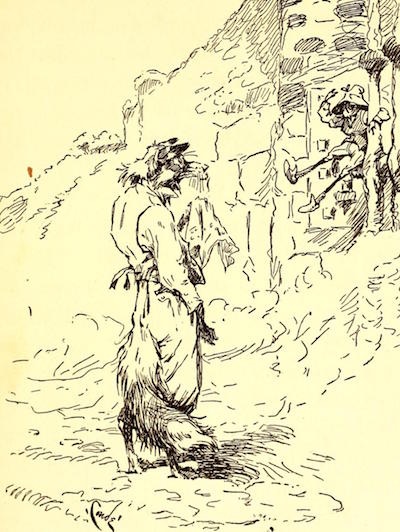 Mr. Cricket, he make answer, "I can hardly tell you, Brer Fox. You know how I travels — with a hop, skip an' a jump — well, I hopped, an' skipped, an' jumped a little quicker this time, an' got here all safe an' sound. When old acquaintances holler at me on the road, I just kept on a-goin'; I done found out long ago that the way for to get anywhere is to go on where you going."

Brer Fox shook his head, and panted, and when they let him in the gate, he run his hand in his pocket, and paid for Mr. Cricket's dinner; and then, after dinner, Mr. Cricket sat back and took a chaw tobacco, and warmed hisself in the sun.