Brer Rabbit'd move sometimes just like the folks does these days. He'd move, but most always he'd take a notion for to come back to his old home. Sometimes he had to move, the other critters pursued after him so close, but they always got the ragged end of the pursuing, and there was times when they'd be right neighborly with him.

it was about the time that Brer Wolf had kind of made up his mind that he can't outdo Brer Rabbit, no way he can fix it, and he say to hisself that he better let him alone till he can get him in a corner where he can't get out. So Brer Wolf, he live with his family on one side the road, and Brer Rabbit live with his family on the other side, not close enough for to quarrel about the fence line, and yet close enough for their youngest chillun to play together whiles the old folks was paying their Sunday calls.

It went on and went on this way till it look like Brer Rabbit done forget how to play tricks on his neighbors and Brer Wolf done disremembered that he ever is try for to catch Brer Rabbit for meat for his family. One Sunday in special, they was mighty friendly. It was Brer Rabbit's time for to call on Brer Wolf, and both of 'em was setting up in the porch just as natural as life. Brer Rabbit was chewing his tobacco and spitting over the railing and Brer Wolf was grinning about old times, and picking his toothies, which they look mighty white and sharp. They was sitting up there, they was, just as thick as fleas on a dog's back, and looking like butter won't melt in their mouth. 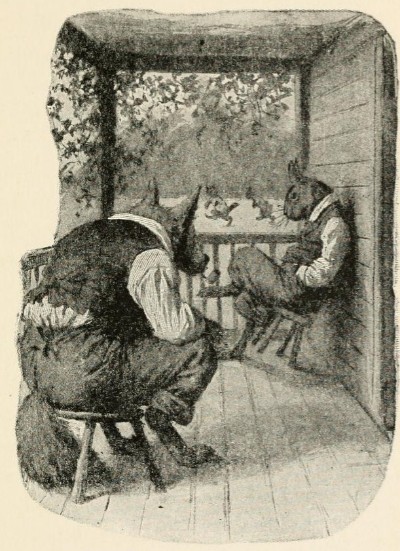 
And whiles they was setting there, little Wiley Wolf and Riley Rabbit was playing in the yard just like chillun will. They run and they romped, they frisk and they frolic, they jump and they hump, they hide and they slide, and it look like they had more fun than a mule can pull in a wagon. Little Wiley Wolf, he'd run after Riley Rabbit, and then Riley Rabbit'd run after Wiley Wolf, and here they had it up and down and round and round, till it look like they'd run theyself to death. About the time you'd think they pleased to drop, one of 'em would holler out, "King's Excuse!' and in them days, when you say that, nobody can't catch you, it ain't make no difference who, 'cause if they dares to lay hands on you after you say that, they could be took to the place where they done their judging, and if they weren't mighty sharp they'd get put in jail.

Now, whiles Wiley Wolf and Riley Rabbit was having their fun, their daddies was pleased to hear the racket what they make, and see the dust they raise. They squealed and they squalled, and ripped around till you'd've thunk they was a good size whirlwind blowing in the yard. Brer Rabbit chewed his tobacco right slow and shut one eye, and old Brer Wolf lick his chops and grin. Brer Rabbit allow, "The youngsters is getting mighty familious," and old Brer Wolf say, "They is indeedy, and I hope they'll keep it up. You know how we used to be, Brer Rabbit; we was constant a-playing tricks on one another, and it looked like we was always at outs. I hope the younguns'll have better manners!"

They sat there, they did, talking about old times, till the sun got low, and the visiting had to be cut short. Brer Rabbit say that he had to cut some kindling so his old woman can get supper, and Brer Wolf allow that he always cut his kindling on Saturday so he can have all Sunday to hisself, and smoke his pipe in peace. He went a piece of the way with Brer Rabbit, and Wiley Wolf, he come, too, and him and Riley Rabbit had all sorts of a time after they got in the big road. There was bushes on both sides, and they kept up their game of hide and seek just as far as Brer Wolf went, but by and by, he say he gone far enough, and he say he hope Brer Rabbit'll come again right soon, and let Riley come and play with Wiley enduring of the week.

Not to be outdone, Brer Rabbit invite Brer Wolf for to come and see him, and likewise to let Wiley come and play with Riley. "They ain't nothing but chillun," says he, "and look like they done took a liking to one another."

On the way back home, Brer Wolf make a mighty strong talk to Wiley. He say, "It's more than likely that the little Rab will come to play with you some day when there ain't nobody here, and when he do, I want you to play the game o* riding in the bag."

Wiley Wolf say he ain't never hear tell of that game, and old Brer Wolf say it's easy as falling off a log. "You get in the bag,' says he, "and let him haul you round the yard, and then he'll get in the bag for you to haul him 'round. What you want to do is to get him used to the bag; you hear that, don't you? Get him use to the bag." 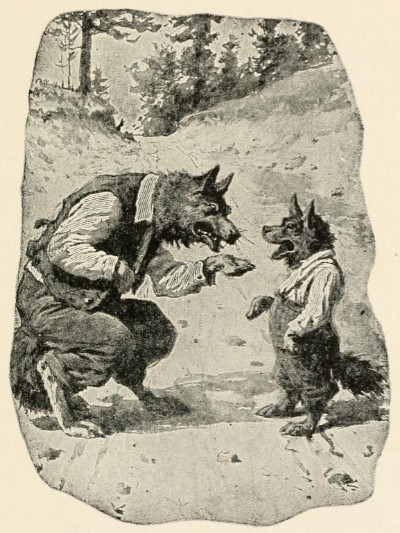 
So when little Riley come, the two of 'em had a great time of riding in the bag; it was just like riding in a wagon, excepting that Riley Rabbit look like he ain't got no more sense than to haul little Wiley Wolf over the roughest ground he can find, and when Wiley hollered that he hurt him, Riley'd say he won't do it no more, but the next chance he got, he'd do it again.

Well, they had all sorts of a time, and when Riley Rabbit went home, he up and told 'em all what they'd been a-playing. Brer Rabbit ain't say nothing; he just sat there, he did, and chew his tobacco, and shut one eye.

And when old Brer Wolf come home that night, Wiley told him about the good time they'd had. Brer Wolf grin, he did, and lick his chops. He say, says he, "There's two parts to that game. When you get tired of riding in the bag, you tie the bag." He went on, he did, and told Wiley that what he want him to do is to play riding in the bag till both got tired, and then play tying the bag, and at the last he was to tie the bag so little Riley Rabbit can't get out, and then to go to bed and cover up his head.

So said, so done. Little Riley Rabbit come and played riding in the bag, and then when they got tired, they played tying the bag. It was mighty funny for to tie one another in the bag, and not know if it was going to be untied. I don't know what would've happen to little Riley Rab if old Brer Rabbit ain't come along with a big load of suspicions. He call the little Rabbit to the fence. He talk loud and he say that he want him for to fetch a turn of kindling when he start home, and then he say to Riley, "Be tied in the bag once more, and then when Wiley gets in, tie him in there hard and fast. Wet the string in you mouth, and pull it just as tight as you kin. Then you come on home; you mammy want you." 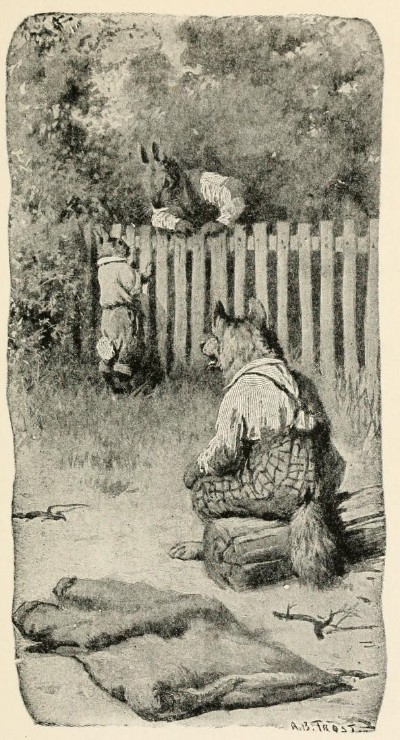 
The last time Wiley Wolf got in the bag, little Riley tied it so tight that he couldn't've got it loose if he'd've tried. He tied it tight, he did, and then he allow, "I got to go home for to get some kindling, and when I do that, I'll come back and play till supper-time." But if he ever is went back there, I ain't never hear talk of it.

Wiley Wolf was in the bag, right where Riley Rab lef' him. He was in the bag and there he stayed till old Brer Wolf come from where he been working in the field—the critters was mostly farmers in them days. He come back, he did, and he see the bag, and he know by the bulk of it that there was something in it, and he was so greedy that his mouth fair dribbled. Now, then, when Wiley Wolf got in the bag, he was mighty tired. He'd been a-scuffling an a-wrastling till he was plumb wore out. He hear Riley Rab say he was coming back, and while he was waiting, he dropped off to sleep, and there he was when his daddy come home—sound asleep.

Old Brer Wolf ain't got but one idea, and that was that Riley Rab was in the bag, so he went to the window, and ask if the pot was boiling, and his old woman say it was. With that, he pick up the bag, and 'fore you could bat your eye, he had it soused in the pot.

That's the way the tale runs; as they given it to me, so I give it to you.