2. Brother Fox Catches Mr. Horse. Text Source: Nights with Uncle Remus by Joel Chandler Harris. Online at Project Gutenberg. I have removed the frame material and standardized the spelling; click here for the original spelling plus all notes to the story.

One time old Brer Rabbit got Brer Fox in the worst trouble what a man was most ever got in yet, and that was when he fool him about the horse. Ain't I never tell you about that? But no matter if I is. Hoe-cake ain't cook done good till it's turned over a couple of times.

Well, after Brer Fox done get rested  from keeping out of the way of Mr. Dog, and sort of catch up with his rations, he say to hisself that he be dog-his-cats if he don't slaughterate old Brer Rabbit if it take him a month; and that, too, on top of all the experience what he done been had with him.

Brer Rabbit he sort of get wind of this, and one day, whiles he going along the road studying how he going to hold he hand with Brer Fox, he see a great big horse laying stretch out flat on he side in the pasture; and he took and crept up, he did, for to see if this here horse done gone and die. He crept up and he crept 'round, and by and by he see the horse switch he tail, and then Brer Rabbit know he ain't dead.

With that, Brer Rabbit lope back to the big road, and most the first man what he see going on by was Brer Fox, and Brer Rabbit he took after him, and holler, "Brer Fox! O Brer Fox! Come back! I got some good news for you. Come back, Brer Fox," says he.

Brer Fox, he turn 'round, he did, and when he see who calling him, he come galloping back, 'cause it seem like that just as good a time as any for to nab Brer Rabbit; but before he get in nabbing distance, Brer Rabbit he up and say, says he, "Come on, Brer Fox! I done find the place where you can lay in fresh meat enough for to last you plumb till the middle of next year," says he.

When they got there, sure enough, there lay the horse all stretch out in the sun, fast asleep, and then Brer Fox and Brer Rabbit, they had a dispute about how they going to fix the horse so he can't get loose. One say one way and the other say another way, and there they had it, till after while Brer Rabbit, he say, says he, "The onliest plan what I knows of, Brer Fox," says he, "is for you to get down there an' let me tie you to the horse tail, an' then, when he try to get up, you can hold him down," says he. "If I was big man like what you is," says Brer Rabbit, says he, "you might tie me to that horse tail, an' if I ain't hold him down, then Joe's dead an' Sal's a widow. I just knows you can hold him down," says Brer Rabbit, says he, "but yet, if you afeared, we just better drop that idea and study out some other plan," says he. 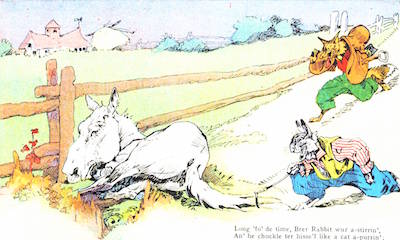 Brer Fox sort of dubious about this, but he pleased to play biggity before Brer Rabbit, and he took and agree to the program, and then Brer Rabbit, he took and tie Brer Fox to the horse tail, and after he get him tie there hard and fast, he sort of step back, he did, and put he hands akimbo, and grin, and then he say, says he, "If ever there was a horse caught, then we done caught this one. Look sort of like we done put the bridle on the wrong end," says he, "but I lay Brer Fox is got the strength for to hold him," says he.

Course, when the horse feel Brer Fox hanging there onto he tail, he thunk something curious was the matter, and this make him jump and rear worser and worser, and he shake up Brer Fox same like he was a rag in the wind, and Brer Rabbit, he jump and holler, "Hold him down, Brer Fox! Hold him down! You got him now, sure! Hold yo' grip, and hold him down," says he. 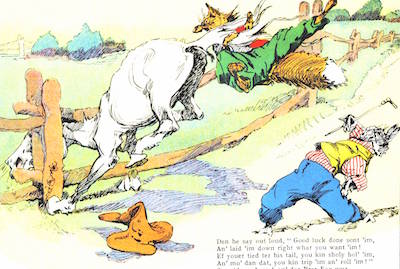 By and by, when Brer Fox get chance, he holler back, he did, "How in the name of goodness I goin' to hold the horse down 'less I get my claw in the ground?"

By and by the horse begun to kick with he behind legs, and the first news you know, he fetch Brer Fox a lick in the stomach that fairly make him squall, and then he kick him again, and this time he break Brer Fox loose, and sent him a-whirling; and Brer Rabbit, he keep on a-jumping 'round and hollering, "Hold him down, Brer Fox!"

Brer Fox weren't exactly killed, but he was the next door to it. He was all broke up, and whiles he was getting well, hit sort of come across he mind that Brer Rabbit done play another game on him. 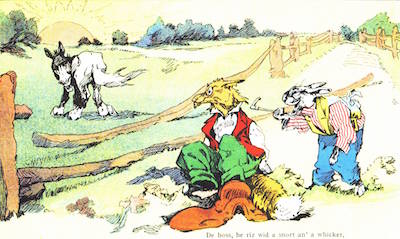