39. Brother Rabbit Gets the Provisions. Text Source: Nights with Uncle Remus by Joel Chandler Harris. Online at Project Gutenberg. I have removed the frame material and standardized the spelling; click here for the original spelling plus all notes to the story.


BRER RABBIT, BRER WOLF,
and the WAGON OF FOOD 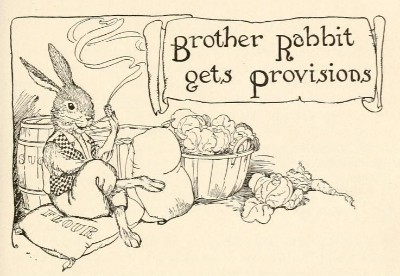 It come about that one time vittles was monstrous scarce and high, and money mighty slack. Long as there was any vittles going 'round, Brer Rabbit, he was bound to get he share of  'em, but by and by it come to that pass that Brer Rabbit stomach begun to pinch 'im; and whiles he getting hungry the other critters, they was getting hungry theyself.

It went on this a-way till one day Brer Rabbit and Brer Wolf meet up with one another in the big road, and after they holler howdy they sat down, they did, and make a bargain.

They took and agree with one another that they sell their mammy and take the money and get something or other to eat. Brer Wolf, he allow, he did, that being's it seem like he the hungriest critter on the face of the earth, that he sell his mammy first, and then, after the vittles give out, Brer Rabbit he can sell he own mammy and get some more grub.

Ole Brer Rabbit, he chipped in and agreed, he did, and Brer Wolf, he took and hitch up he team, and put he mammy in the wagon, and then him and Brer Rabbit drove off.

Man come 'long. "Where you going?"

Going 'long down to town,
With a bag of corn for to sell;
We ain't got time for to stop and talk,
Yet we wish you mighty well!

Now, then, they took and carry Brer Wolf mammy to town and sell her, and they start back with a wagon-load of vittles. The day was a-waning, then the sun was a-setting. The wind took and blow up sort of stiff, and the sun look red when she setting. They drove on, and drove on. The wind blow, and the sun shine red. By and by, Brer Wolf scrooch up and shiver, and allow, "Brer Rabbit, I'm a-getting mighty cold."

Brer Rabbit, he laugh and allow, "I'm getting sort of creepy myself, Brer Wolf."

They drove on and drove on. Wind blow keen, sun shine red. Brer Wolf scrooch up in little knot. By and by he sing out, "Brer Rabbit, I'm freezin'! I'm that cold I don't know what to do!"

Brer Rabbit, he point to the setting sun and say, "You see that great big fire 'cross there in the woods, Brer Wolf? Well, they ain't nothing to hinder you from going there and warming yo'self and I'll wait here for you. Gimme the lines, Brer Wolf, and you go warm yo'self all over."

With that Brer Wolf, he put out just as hard as he can, for to see if he can't find the fire; and whiles he was gone, bless goodness, what should Brer Rabbit do but cut off the horses' tails and stick 'em down deep in the mud — he stick the horses' tails down in the mud, and then he took and drove the wagon 'way off in the swamp and hide it. Then he took and come back, old Brer Rabbit did, for to wait for Brer Wolf.

After so long a time, sure enough, here come Brer Wolf just a-galloping-up back. Brer Rabbit he hail him. "Is you warm yo'self, Brer Wolf?"

Brer Rabbit, he sort of scratch hisself behind the shoulder-blade, and allow, "Never mind about the fire, Brer Wolf. I got something here that'll warm you up. If you ain't never been warm before, I lay you'll get warm this time."

This make Brer Wolf sort of look 'round, and when he see Brer Rabbit holding on to the two horse-tails, he up and squall out, he did, "Lord-a-mercy, Brer Rabbit! Where my vittles? Where my wagon? Where my horses?"

"They are all right here, Brer Wolf; they are all right here. I stayed there where you left me till the horses begun to get restless. Then I cluck at 'em, and, bless gracious, they start off and land in a quicksand. When they begun to mire, I just took and turn everything a-loose and grab the horses by the tail, and I been standing here wishing for you, Brer Wolf, till I done gone gray in the mind. I allow to myself that I'd hang on to these here horse-tails if it killed every cow in the island. Come help me, Brer Wolf, and I lay we'll just naturally pull the ground out but what we'll get these critters out." 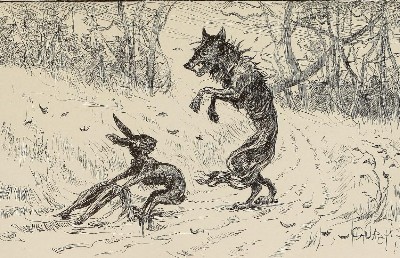 By and by Brer Rabbit allow, "Well, sir, Brer Wolf; we pull so hard till we pull the tails plumb out!"

Old Brer Wolf, he don't know what to do, but it begun to get dark, and it weren't long 'fore he tell Brer Rabbit good-by, and off he put for home. That there Brer Rabbit, he just took and wait till Brer Wolf get out of hearing, and then he went into the swamp and drove the horses home and get all the vittles, and he ain't had to sell he old mammy neither. That he ain't.