49. Mr. Benjamin Ram Defends Himself. Text Source: Nights with Uncle Remus by Joel Chandler Harris. Online at Project Gutenberg. I have removed the frame material and standardized the spelling; click here for the original spelling plus all notes to the story.

Mr. Ram was a sight, man. He most surely was. He wrinkly old horn and the shaggy hair on he neck make 'im look mighty servigorous, and whence he shake he head and snort, it seem like he going to fair paw the earth from under 'im.

Ole Brer Fox been picking up old Mr. Benjamin Ram chilluns when they get too far from home, but look like he ain't never been get close to the old critter.

So one time when he was coming on down the road, talking 'long with Brer Wolf, he up and allow, old Brer Fox did, that he mighty hungry in the neighborhoods of the stomach. This make Brer Wolf look like he astonished, and he ask Brer Fox how the name of goodness come he hungry when old Mr. Benjamin Ram laying up there in the house just a-rolling in fat.

Then Brer Fox took and allow, he did, that he done been in the habits of eating Mr. Benjamin Ram chillun, but he sort of feared of the old critter 'cause he look so bad on the account of he red eye and he wrinkly horn.

Brer Wolf just holler and laugh, and then he allow, "Lordy, Brer Fox! I don't know what kind of man is you, nohow! Why, that there old critter ain't never hurted a flea in all he born days—that he ain't," says he.

Brer Fox, he look at Brer Wolf right hard, he did, and then he up and allow, "Heyo, Brer Wolf! Many's the time that you been hungry 'round in these diggings and I ain't hear talk of you making a meal off of Mr. Benjamin Ram," says he.

Brer Fox talk so close to the fatal truth, that Brer Wolf got tooken with the dry grins, yet he up and respond, says he, "I just like to know who in the name of goodness want to eat tough critter like that old Mr. Benjamin Ram—that what I like to know," says he.

Brer Wolf, he strike the end of he cane down upon the ground, and he say, says he, "I done say all I got to say, and what I say, that I'll stick to. That old critter lots too tough."

Hungry as he is, Brer Fox laugh way down in he stomach. After while he allow, "Well, then, Brer Wolf, instead of disputing along of you, I'm gonna do what you say; I'm going to go up there and get a bite of old Mr. Benjamin Ram, and I wish you be so good as to go 'long with me for company," says he.

Brer Wolf jaw sort of fall when he hear this, and he allow, "Eh-eh, Brer Fox! I'd rather go by my own—'lone self," says he.

"Well, then," says Brer Fox, says he, "you better make haste," says he, '''cause it ain't going to take me so mighty long for to go up there and make hash out of old Mr. Benjamin Ram," says he.

Brer Wolf know mighty well, that if he dares to back out from a banter like that he never is to hear the last of it from Miss Meadows and Miss Motts and the gals, and he march off towards Mr. Benjamin Ram house.

Little puff of wind come and blow'd up some leafs, and Brer Wolf jump like somebody shooting at 'im, and he fly mighty mad when he hear Brer Fox laugh. He amend he gait, he did, and it weren't 'long 'fore he was knocking at Mr. Benjamin Ram door.

He knock at the door, he did, and course he expect somebody for to come open the door; but instead that, lo and beholds here come Mr. Benjamin Ram 'round the house. 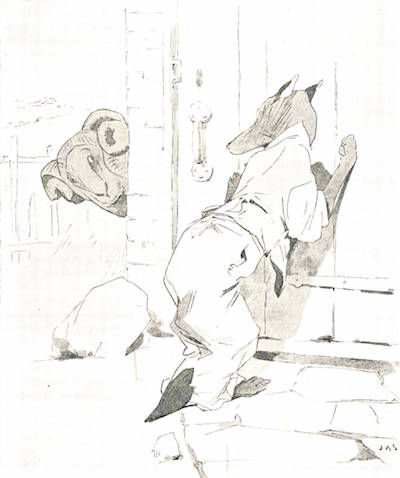 There he was—red eye, wrinkly horn and shaggy head. Now, then, in case like that, what a slim-legged man like Brer Wolf going do? There ain't no two ways, he going to get 'way from there, and he went back to where Brer Fox is more samer than if the patter-rollers was after 'im.

Brer Fox, he laugh and he laugh, and old Brer Wolf, he look mighty glum. Brer Fox ask 'im is he done killed and et Mr. Benjamin Ram, and if so be, is he left any for him. Brer Wolf say he ain't feeling well, and he don't like mutton nohow. Brer Fox allow, "You may be puny in the mind, Brer Wolf, but you ain't feeling bad in the leg, 'cause I done seed you work 'em."

Brer Wolf allow he just a-running for to see if it won't make 'im feel better. Brer Fox, he say, says he, that when he feeling puny, he ain't ask no more than for somebody for to get out the way and let 'im lay down.

They went on in this a-way, they did, till by and by Brer Fox ask Brer Wolf if he'll go with 'im for to catch Mr. Benjamin Ram. Brer Wolf, he allow, he did, "Eh-eh, Brer Fox! I feared you'll run and left me there for to do all the fighting." 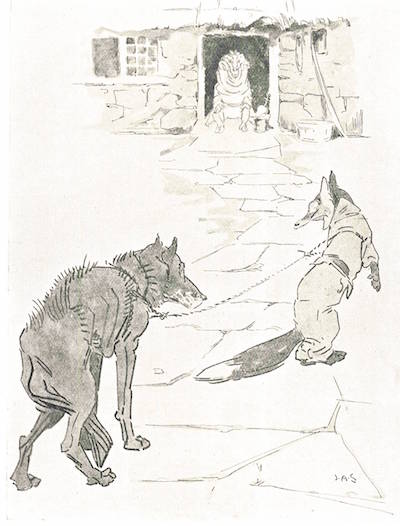 Brer Fox, he allow that he'll fix that, and he took and got 'im a plough-line, and tied one end to Brer Wolf and the other end to he own self. With that they put out for Mr. Benjamin Ram house. Brer Wolf, he sort of hang back, but he ashamed for to say he scared, and they went on and went on plumb till they get right spang up to Mr. Benjamin Ram house. When they get there, the old critter was setting out in the front port sort of sunning hisself. He see 'em coming, and when they get up in hailing distance, he sort of clear up he throat, he did, and holler out, "I much obliged to you, Brer Fox, for catching that audacious villain and fetching 'im back. My smoke-house running short, and I'll just chop 'im up and pickle 'im. Fetch 'im in, Brer Fox! Fetch 'im in!"

First Brer Wolf try to untie hisself, then he took and broke and runned, and he drag old Brer Fox after 'im just like he ain't weigh more than a pound, and I let you know it was many a long day 'fore Brer Fox get well of the thumping he got.