22. A Story About the Little Rabbits. Text Source: Uncle Remus, His Songs and His Sayings by Joel Chandler Harris. Online at Project Gutenberg. I have removed the frame material and standardized the spelling; click here for the original spelling plus all notes to the story.

BRER FOX and the LITTLE RABBITS

Find 'em where you will and when you may, good chilluns always gets took care of. There was Brer Rabbit's chilluns; they minded their daddy and mammy from day's end to day's end. When old man Rabbit say scoot, they scooted, and when old Miss Rabbit say scat, they scatted. They did that. And they kept their clothes clean, and they ain't had no smut on their nose neither.

They was good chilluns, and if they hadn't of been, there was one time when there wouldn't've been no little rabbits —nary a one. That's what.

Brer Fox dropped in at Brer Rabbit house, and didn't found nobody there except the little Rabbits. Old Brer Rabbit, he was off somewheres raiding on a collard patch, and old Miss Rabbit, she was attending on a quilting in the neighborhood, and while the little Rabbits was playing hide-and-switch, in dropped Brer Fox. 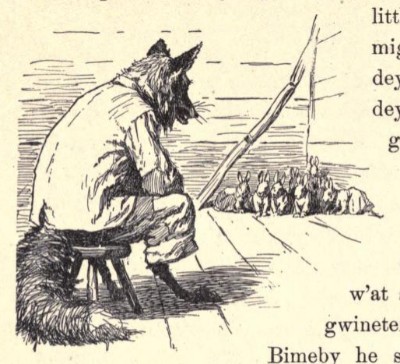 The little Rabbits was so fat that they fairly make his mouth water, but he remember about Brer Wolf, and he scared for to gobble 'em up except he got some excuse. 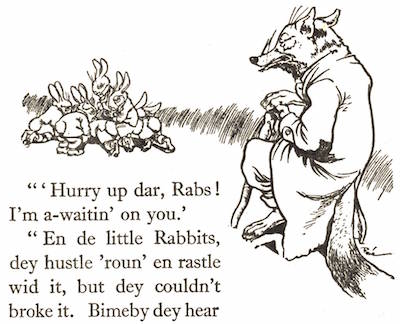 The little Rabbits, they mighty skittish, and they sort of huddle theyself up together and watch Brer Fox motions. Brer Fox, he sat there and study what sort of excuse he going to make up. 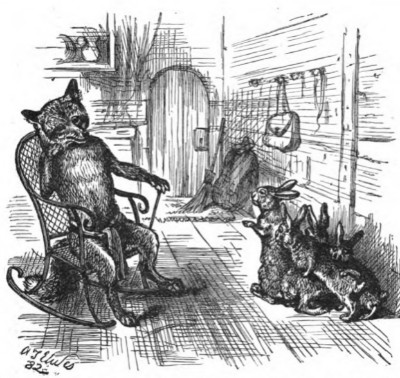 By and by he see a great big stalk of sugar-cane standing up in the corner, and he clear up his throat and talk biggity, "Hey! You young Rabs there, sail 'round here an' broke me a piece of that sweetenin'-tree," says he and then he cough.

The little Rabbits, they got out the sugar-cane, they did, and they rassle with it, and sweat over it, but it weren't no use. They couldn't broke it.

Brer Fox, he make like he ain't watching, but he keep on hollering, "Hurry up there, Rabs! I'm a-waitin' on you."

Then the little Rabbits, they get mighty glad, and they gnawed the cane almost before old Brer Fox could get his legs uncrossed, and when they carried him the cane, Brer Fox, he sat there and study how he going to make some more excuse for nabbing on 'em, and by and by he get up and get down the sifter what was hanging on the wall, and holler out, "Come here, Rabs! Take this here sifter, an' run down to the spring an' fetch me some fresh water."

The little Rabbits, they run down to the spring, and try to dip up the water with the sifter, but 'cause it all run out, and it keep on running out, till by and by the little Rabbits sat down and begun to cry.

Then the little bird sitting up in the tree he begin for to sing, and this here's the song what he sing: 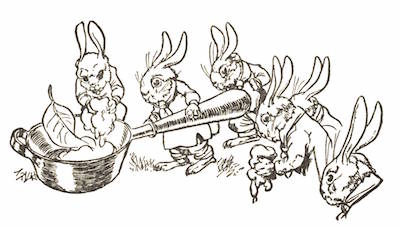 Up they jump, the little Rabbits did, and they fix the sifter so it won't leak, and they carry the water to old Brer Fox. 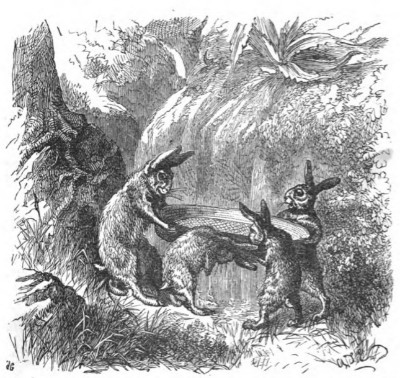 Then Brer Fox he get mighty mad, and point out a great big stick of wood, and tell the little Rabbits for to put that on the fire. The little chaps they got 'round the wood, they did, and they lift at it so hard till they could seen their own sins, but the wood ain't budge. 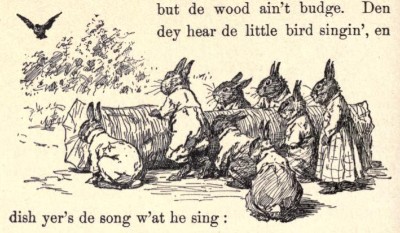 Then they hear the little bird singing, and this here's the song what he sing: 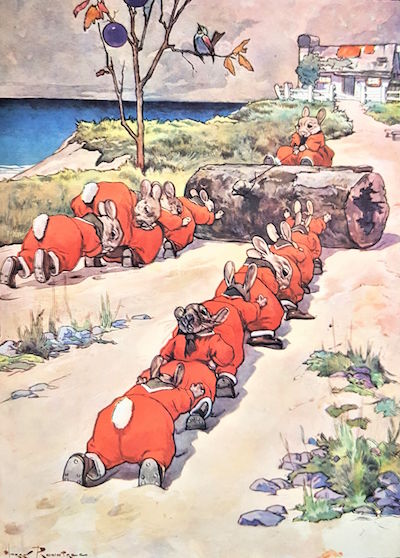 And just about the time they got the wood on the fire, their daddy, he come skipping in, and the little bird, he flewed away.

Brer Fox, he seed his game was up, and it wasn't long before he make his excuse and start for to go.

"You better stay an' take a snack with me, Brer Fox," says Brer Rabbit, says he. "Since Brer Wolf done quit comin' an' sittin' up with me, I gettin' so I feels right lonesome these long nights," says he.

But Brer Fox, he button up his coat-collar tight and just put out for home. 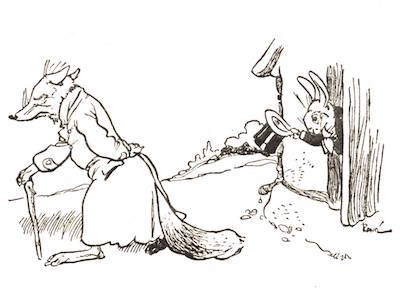