C032. The Blacksmith and the Devil

32. Jacky-My-Lantern. Text Source: Uncle Remus, His Songs and His Sayings by Joel Chandler Harris. Online at Project Gutenberg. I have removed the frame material and standardized the spelling; click here for the original spelling plus all notes to the story.


THE BLACKSMITH and THE DEVIL

Whiles I was crossing the branch just now, I come upwith a Jacky-my-lantern, and she was burning worse than a bunch of lightning-bugs, man. I know'd she was a-fixing for to lead me into that quagmire down in the swamp, and I steered clear of her. Ye sir. I did that.

The Bad Man, the Ole Boy hisself. He done hide his horns, and his tail, and his hoof, and he come dress up like white folks. He took off his hat and he bow, and then he tell the blacksmith who he is, and that he done come after him.

The blacksmith, he sail in for to have his fun, and he have so much that he done clean forgot about his contract, but by and by, one day he look down the road, and there he see the Bad Man coming, and then he knowed the year was out.

When the Bad Man got in the door, the blacksmith was pounding away at a horse-shoe, but he weren't so busy that he didn't ask him in. The Bad Man sort of do like he ain't got no time for to tarry, but the blacksmith say he got some little jobs that he pleased to finish up, and then he ask the Bad Man for to set down a minute; and the Bad Man, he took and sat down, and he sat in that chair what he done conjured on, course, there he was. 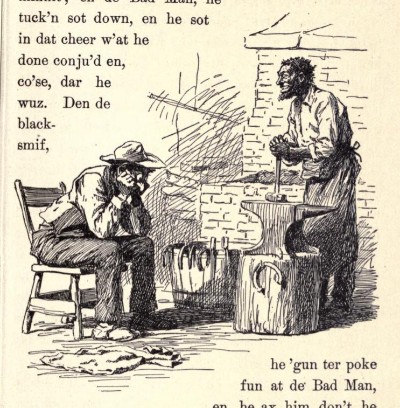 So then the blacksmith gave the word, and the Bad Man saunter off down the big road, setting traps and laying his program for to catch more sinners.

The next year it pass same like the other one. At the appointed time here come the Old Boy after the blacksmith, but still the blacksmith had some jobs that he pleased to finish up, and he ask the Bad Man for to take hold of the sledge and he help him out; and the Bad Man, he allow that rather than be dispolite, he don't care if he do hit her a biff or two; and with that he grab up the sledge, and there he was again, 'cause he done conjured the sledge so that whosomever took her up can't put her down unless the blacksmith say the word. They palavered there, they did, till by and by the Bad Man he up and let him off another year.

Well, then, that year pass same as the other one. Month in and month out that man was rolling in dram, and by and by here come the Bad Man. The blacksmith cry and he holler, and he rip 'round and tear his hair, but it just like he didn't, 'cause the Bad Man grab him up and cram him in a bag and tote him off.

While they was going along they come up with a passel of folks what was having one of there here Fourth of July barbecues, and the Ole Boy, he allow that maybe he can get some more game, and what do he do but join in with 'em. He lines in and he talk politics same like the other folks, till by and by dinnertime come 'round, and they ask him up, which agreed with his stomach, and he deposit his bag underneath the table alongside the other bags what the hungry folks'd brung.

Last, when the time come for to go, the Old Boy up with his bag and slung her on his shoulder, and off he put for the Bad Place. When he got there he took and drop the bag off of his back and call up the imps, and they just come a-squalling and a-capering, which I expect they must have been hungry. Leastaways they just swarmed 'round, hollering out, "'Daddy, what you brung—daddy, what you brung?"

So then they open the bag, and lo and beholds, out jump a big bull-dog, and the way he shook 'em little imps was a caution, and he kept on gnawing on 'em till the Old Boy open the gate and turn him out.

After a long time, the blacksmith he took and die, and when he go to the Good Place the man at the gate don't know who he is, and he can't squeeze in.

Then he go down to the Bad Place, and knock. The Ole Boy, he look out, he did, and he knowed the blacksmith the minute he laid eyes on him; but he shake his head and say, says he, "You'll have 'scuse me, Brer Blacksmith, 'cause I done had experience along with you. You'll have to go somewheres else if you want to raise any racket," says he, and with that he shut the door.

And they do say, that since that day the blacksmith been sort of hovering 'round 'twixt the heavens and the earth, and dark nights he shine out so folks call him Jacky-my-lantern. That's what they tells me. It may be wrong or it may be right, but that's what I hears.