C168. Brother Rabbit Has Trouble With the Moon

2: Brother Rabbit Has Trouble With the Moon. Text Source: Uncle Remus and the Little Boyby Joel Chandler Harris. Online at Hathi Trust. I have removed the frame material and standardized the spelling; click here for notes to the story.

There's a heap of up and downs in this world, more specially downs. It ain't nigh like it was when Brer Rabbit and all the other critters was next-door neighbors to the Moon. There weren't no hard times in that country. They had lots more frolicking and fiddling, and not nigh so much scuffling 'round for vittles. Up there in that country where they was nigh neighbors to Uncle Moon.

But they had their troubles, 'cause there was one time when old Uncle Moon begun to get puny, and it look mighty like he going to have a spell of sickness.

Now when the critters seed that Uncle Moon was in a bad way, they ask theyself what the matter. They call and ask him how he getting on and he say he ain't feeling so well.

Brer Rabbit howdied with him, and then ask him what the name of goodness is the matter. He say, "Ain't there nothing I can do for to he'p you out?" 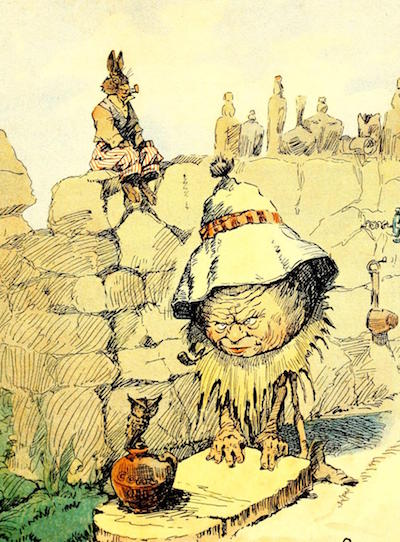 "When it come to suppleness," says Brer Rabbit, says he, "I takes it with me wheresomever I goes."

Then Uncle Moon say, "I'll tell you just how it is; I want to send word to Mr. Man that I ain't feeling right well. I been shinin' for him at night, and done caught cold from bein' out in the night air so much, an' if I don't put out my light, an' take a recess, I'll be in a mighty bad way. I want to take a holiday, but if I don't send Mr. Man word, he'll be scared to death."

"Just show me the way for to go," says old Brer Rabbit, says he, "'cause I want to see this thing you call Mr. Man."

So Uncle Moon showed him the way, and tod him what to say: "I'm gettin' weak for to be more strong; I'm goin' in the shade for to get more light!" 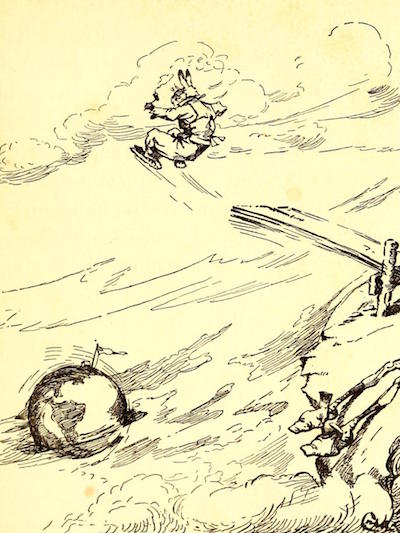 Brer Rabbit say this over and over, and then he took a running start, and jump the long jump; and it sure was a long one, man! He took a notion that he was falling instead of jumping and this make him open both eyes big and wide, and they been big and wide since that time.

He landed all right, and then he got up and kind of romp about for to see if his joints was supple. He look in Mr. Man's garden, and there he see green peas, and cabbage, and collards, and sparrow-grass, and they make him dribble at the mouth. He knock at the door, and Mr. Man ask him what he want. He try to say the words that Uncle Moon had sent. He say, "Uncle Moon sent this word: I'm gettin' weak; I got no strength; I'm goin' where the shadows stay." 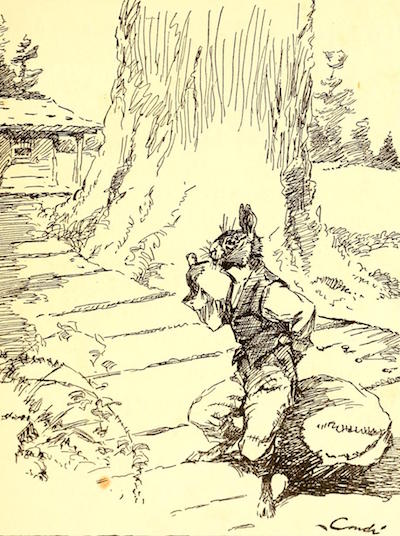 Mr. Man can't make this out, so he sent word back: "Seldom seed an' soon forgot; when Uncle Moon dies his foots gets cold!"

With dat, Brer Rabbit took the long jump again and run and told Uncle Moon what Mr. Man say, and this make him mighty mad; he up with a shovel and hit Brer Rabbit on the mouth and split his lip.

Then, after that, Brer Rabbit tell the other critters about the sheep and the goats and the fine fat pigs what Mr. Man raising, and by and by, one day, they all took the long jump, and they all been here since that time.