1: Crazy Sue's Story. Text Source: Daddy Jake, The Runaway by Joel Chandler Harris. Online at Hathi Trust. I have removed the frame material and standardized the spelling; click here for notes to the story.

The frogs made so much fuss 'cause they are mad with Mr. Rabbit. They are trying their best to drive him out of the swamp. It's one of them old-time fusses. It's most too old to talk about.

It went on this a-way till one day Mr. Coon meet Mr. Rabbit in the big road. They shook hands, they did, and then Mr. Coon, he allow, "Brer Rabbit, where you get such a fine chance of fish?"

Then Mr. Coon shake his head and allow, "Then how come I ain't can catch no frogs?"

Mr. Rabbit sat down in the road and scratched for fleas, and then he allow, "It's 'cause you done make 'em all mad, Brer Coon. One time in the dark of the moon, you slipped down to the branch an' catch the old King Frog; and ever since that time, whenever you are passing by, you can hear 'em sing out, first one an' then another — Here he come! There he goes! Hit him in the eye! Hit him in the eye! Mash him and smash him; mash him and smash him! Yes sir, that what they say. I hear 'em constant, Brer Coon, and that just what they say."

Then Mr. Coon up and say, "If that the way they goin' on, how the name of goodness can I catch 'em, Brer Rabbit? I pleased to have somethin' to eat for me an' my family connection."

Mr. Rabbit sort of grin in the corner of his mouth, and then he say, "Well, Brer Coon, bein' as you been so sociable 'long with me, an' ain't never showed yo' toothies when I pull yo' tail, I'll just whirl in an' help you out."

Mr. Rabbit hung his fish on a tree limb, and say, "Now, Brer Coon, you pleased to do just like I tell you."

Mr. Coon allowed that he would if the Lord spared him.

Then Mr. Rabbit say, "Now, Brer Coon, you just rack down yonder, an' get on the big sand-bar 'twixt the river an' the branch. When you get there you must stagger like you sick, an' then you must whirl round an' round an' drop down like you dead. After you drop down, you must sort of jerk yo' legs once or twice, an' then you must lay right still. If fly light on yo' nose, let him stay there. Don't move; don't wink yo' eye; don't switch yo' tail. Just lay right there, and 'twon't be long 'fore you hear from me. Yet don't you move till I give the word."

Mr. Coon, he paced off, he did, and done just like Mr. Rabbit told him. He staggered round on the sand-bank, and then he dropped down dead. After so long a time, Mr. Rabbit come loping along, and soon as he get there, he squall out, "Coon dead!" This rousted the frogs, and they stuck their heads up for to see what all the rippit was about. One great big green one up and holler, "What the matter? What the matter?" He talk like he got a bad cold. 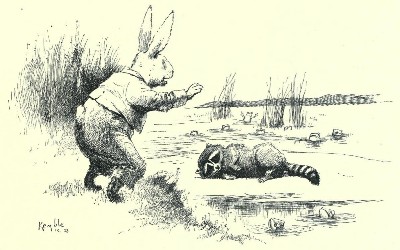 They kept on disputing and disputing, till by and by it look like all the frogs in the neighborhoods was there.

Mr. Rabbit look like he ain't a-hearing nor a-caring what they do or say. He sat there in the sand like he going in mourning for Mr. Coon. The Frogs kept getting closer and closer. Mr. Coon, he ain't move. When a fly'd get on him, Mr. Rabbit he'd brush him off.

By and by he allow, "If you want to get him out of the way, now's your time, Cousin Frogs. Just whirl in an' bury him deep in the sand."

Mr. Rabbit allow, "Dig the sand out from under him and let him down in the hole."

Then the Frogs they went to work sure enough. There must've been a hundred of 'em, and they make that sad fly, man. Mr. Coon, he ain't move. The Frogs, they dig and scratch in the sand till after while they had a right smart hole, and Mr. Coon was down in there. 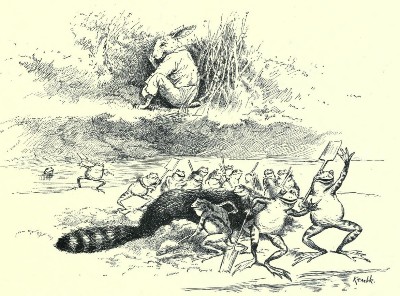 Mr. Rabbit bust out laughing, and holler out, "Rise up, Sandy, and get your meat!" and Mr. Coon riz.