C029. Fox and Rabbit in the Garden

29. Mr. Fox Gets Into Serious Business. Text Source: Uncle Remus, His Songs and His Sayings by Joel Chandler Harris. Online at Project Gutenberg. I have removed the frame material and standardized the spelling; click here for the original spelling plus all notes to the story.


FOX and RABBIT in the GARDEN

It turn out one time that Brer Rabbit make so free with the man's collard-patch that the man he took and set a trap for old Brer Rabbit, and Brer Rabbit he so greedy that he took and walk right spang in it, before he know hisself.

Well, it weren't long before here come Mr. Man, browsing 'round, and he ain't no sooner see old Brer Rabbit than he smack his hands together and holler out, "You are nice feller, you is! Here you been gobbling up my green truck, an' now you trying to tote off my trap. You are mighty nice chap—that's what you is! But now that I got you, I'll just about settle with you for the old an' the new."

And with that, Mr. Man, he go off, he did, down in the bushes after handful of switches. Old Brer Rabbit, he ain't saying nothing, but he feeling mighty lonesome, and he sat there looking like every minute was going to be the next. And whiles Mr. Man was off preparing his brush-broom, who should come parading long but Brer Fox. 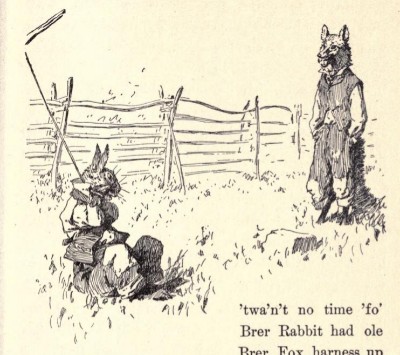 Brer Fox make a great admiration, he did, about the fix what he find Brer Rabbit in, but Brer Rabbit he make like he fit to kill hisself laughing, and he up and tell Brer Fox, he did, that Miss Meadows's folks want him to go down to their house in attendance on a wedding, and he allow which he couldn't, and they allow how he could, and then by and by they take and tie him there whiles they go after the preacher, so he be there when they come back. And more than that, Brer Rabbit up and tell Brer Fox that his chilluns mighty low with the fever, and he pleased to go after some pills for 'em, and he ask Brer Fox for to take his place and go down to Miss Meadows's and have nice time with the gals.

Brer Fox, he in for them kind of pranks, and it weren't no time before Brer Rabbit had old Brer Fox harness up there in his place, and then he make like he got to make haste and get the pills for them sick chilluns. Brer Rabbit weren't more than out of sight before here come Mr. Man with a handful of hickories, but when he see Brer Fox tied up there, he look like he astonished.

"Heyo!" says Mr. Man, says he, "you done change color, an' you done got bigger, an' yo' tail done grow out. What kind of whatshisname is you, anyhow?" says he.

Brer Fox, he stay still, and Mr. Man, he talk on, "It's mighty big luck," says he, "if when I catch the chap what nibble my greens, likewise I catch the fellow what gnaw my goose," says he, and with that he lit into Brer Fox with the hickories, and the way he play rap-jacket was a caution to the neighborhood. Brer Fox, he jerk and he jump, and he squeal and he squall, but Mr. Man, he shower down on him, he did, like fighting a red wasp nest.

By and by, the switches, they got frazzle out, and Mr. Man, he put out after more, and when he done got fairly out of hearing, Brer Rabbit, he showed up, he did, 'cause he just been hiding out in the bushes listening at the racket, and he allow it mighty funny that Miss Meadows ain't come along, 'cause he done been down to the doctor house, and that's further than the preacher yet. 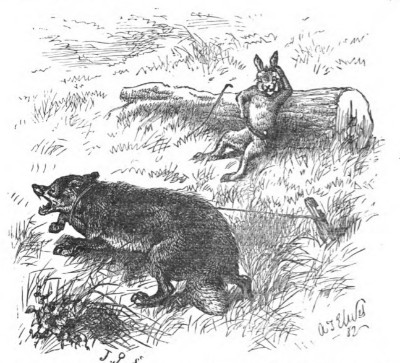 Brer Rabbit make like he hurrying on home, but Brer Fox, he open up, he did, and he say, "I thank you for to turn me loose, Brer Rabbit, an' I'll be obliged," says he, "'cause you done tie me up so tight that it make my head swim, and I don't 'spect I'd last for to get to Miss Meadows's," says he.

Brer Rabbit, he sat down sort of careless like, and begin for to scratch one ear like a man studying about something. "That's so, Brer Fox," says he, "you does look sort of stove up. Look like something been uncombing yo' hairs," says he. 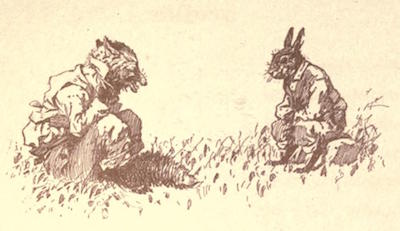 Brer Fox ain't saying nothing, but Brer Rabbit, he keep on talking, "There ain't no bad feelings 'twixt us, is there, Brer Fox? 'Cause if there is, I ain't got no time for to be tarrying 'round here."

Brer Fox say which he don't have no unfriendliness, and with that Brer Rabbit cut Brer Fox loose just in time for to hear Mr. Man whistling up his dogs, and one went one way and the other went another.