13. Brother Fox, Brother Rabbit, and King Deer's Daughter. Text Source: Nights with Uncle Remus by Joel Chandler Harris. Online at Project Gutenberg. I have removed the frame material and standardized the spelling; click here for the original spelling plus all notes to the story.

Well, then, some time along in there, old Brer Fox and Brer Rabbit got to flying 'round King Deer daughter. They tells me she was a monstrous likely gal, and I expect may be she was; leastways, Brer Fox, he hanker after her, and likewise Brer Rabbit, he hanker after her. Old King Deer look like he sort of lean towards Brer Fox, 'cause to a settle man like him, it seem like that Brer Fox can stir 'round and keep the pot a-boiling, more specially being's he the biggest.

It go on this a-way till hardly a day pass that one or the other or them critters don't go sparkling 'round King Deer daughter, and it got so after while that all day long Brer Rabbit and Brer Fox keep the front gate a-screaking, and King Deer daughter ain't scarcely had time for to eat a meal vittles in no peace of mind.

In them days, when a critter go a-courting there weren't none of this here bouquet doings mixed up along of the courtship, and they ain't cut up no capers like folks does now. Stead of scalloping 'round and bowing and scraping, they just go right straight after the gal. Old Brer Rabbit, he might've had some bubby-blossoms wrap up in his handkerchief, but mostly him and Brer Fox's just drop in on King Deer daughter and begin to cast sheep-eyes at her time they sat down and cross their legs.

They went along this a-way, till it begun to look sort of skittish with Brer Rabbit, 'cause old King Deer done goodas say, says he, that he going to take Brer Fox into the family. Brer Rabbit, he  allow, he did, that this ain't going to do, and he study and study how he going to cut Brer Fox out.

Ole King Deer strike he walking-cane down upon the floor, and allow that he don't put no dependence in no such tale like that, and then Brer Rabbit tell him that if he'll just take a walk down in the pasture lot, he can see the carcase of the goats. Old King Deer, he put out, and by and by he come back, and he allow he going to settle matters with Brer Fox if it take him a month.

Brer Rabbit say he a good friend to Brer Fox, and he ain't got no room to talk about him, but yet when he see him destroying King Deer goats and chunking at his chickens, and rattling on the palings for to make the dog bark, he pleased to come lay the case before the family.

"And more than that," says old Brer Rabbit, says he, "I'm the man what can make Brer Fox come an' stand right at the front gate an' tell you that he is kill them goat; an' if you just wait till tonight, I won't ask you to take my word," says he.

King Deer say if Brer Rabbit man enough to do that, then he can get the gal and thanky, too. With that, Brer Rabbit jump up and crack he heels together, and put out for to find Brer Fox. He ain't get far before he see Brer Fox coming down the road all primp up. Brer Rabbit, he sing out, he did, "Brer Foxy, where you goin'?"
And Brer Fox, he holler back, "Go 'way, Rab; don't bother with me. I'm goin' for to see my gal."

Brer Rabbit, he laugh 'way down in his stomach, but he don't let on, and after some more chat, he up and say that old King Deer done tell him about how Brer Fox going to marry he daughter, and then he tell Brer Fox that he done promise King Deer that they'd drop 'round tonight and give him some music.

"An' I up an' told him," says Brer Rabbit, says he, "that the music what we can't make ain't worth makin' —me with my quills, an' you with yo' triangle. The next motion we makes," says he, "we'll have to go off somewheres an' practise up on the song we'll sing, an' I got one here that'll tickle 'em that bad," says Brer Rabbit, says he, "till I lay they'll fetch out a hunk of that big chicken-pie what I see 'em puttin' in the pot just now," says he.

In a occasion like this, Brer Fox say he the very man what Brer Rabbit hunting, and he allow that he'll just about put off paying he call to King Deer house and go with Brer Rabbit for to practise on that song.

Then Brer Rabbit, he get he quills and Brer Fox he get he triangle, and they went down on the spring branch, and there they sing and play, till they get it all by heart. Old Brer Rabbit, he make up the song he own self, and he fix it so that he sing the call, like the captain of the corn-pile, and old Brer Fox, he have to sing the answer.

Don't talk about no songs to me. Gentlemens! That was a funny song from the word go. By and by, when they practise long time, they gets up and goes 'round in the neighborhoods of King Deer house, and when night come they took their stand at the front gate, and after all got still, Brer Rabbit, he give the wink, and they broke loose with their music. They played a tune or two on the quills and triangle, and then they got to the song. Old Brer Rabbit, he got the call, and he open up like this:
Some folks pile up more than they can tote,
And that what the atter with King Deer goat.

Then the quills and the troangle, they come in, and then Brer Rabbit pursue on with the call:
Some kill sheep and some kill shote,
But Brer Fox kill King Deer goat.

And then Brer Fox, he join in with the answer:
I did, that I did, and I'm glad that I did!

And just about that time King Deer, he walk out of the gate and give Brer Fox a clip with his walking-cane, and he follow it up with another one that make Brer Fox fairly squall, and you just better believe he make tracks 'way from there, and the gal she come out, and they ask Brer Rabbit in.

They ask him in, and they give him a great big hunk of chicken-pie, but I won't make sure that he took and marry the gal. The point with me is the way Brer Rabbit run Brer Fox off from there. 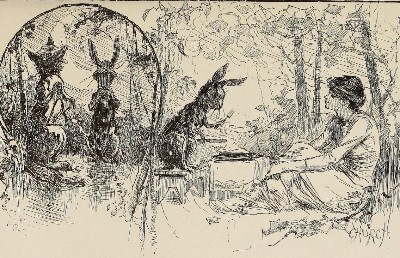