16. Brother Rabbit and Miss Nancy. Text Source: Told by Uncle Remus by Joel Chandler Harris. Online at Project Gutenberg. I removed the frame material and standardized the spelling; click here for the original spelling plus all notes to

Brer Rabbit was a heap bigger in them days than what he is now. It looks like the family done run to seed, and I bet you that ninety-nine thousand year from this very day, the Rabbit crowd won't be bigger than field-mice—I bet you that. He weren't only bigger, but he was mighty handy about a farm, when he took a notion, specially if Mr. Man had any greens in his truck-patch. Well, one time, times was so hard that he had to hire out for his vittles and clothes. He had the idea that he was getting a mighty heap for the work he done, and Mr. Man tell his daughter that he getting Brer Rabbit mighty cheap. They was both satisfied, and when that's the case, everybody else ought to be satisfied. Brer Rabbit can hoe taters, and chop cotton, and fetch up brushwood, and split the kindling, and do right smart.

He say to hisself, Brer Rabbit did, that if he ain't getting no money and mighty few clothes, he bound he'd have a plenty vittles. The first week or two, he ain't cut up no shines; he was getting used to the place. He stuck to his work right straight along till Mr. Man say he one of the best hands on the whole place, and he tell his daughter that she better sat her cap for Brer Rabbit. The gal she toss her head and make a mouth, but all the same she begun to cast sheep eyes at him.

One fine day, when the sun shining mighty hot, Brer Rabbit begun to get mighty hungry. He say he want some water. Mr. Man say, "There the bucket, and yonder the spring. Everything fix so you can get water monstrous easy."

Brer Rabbit get the water, but still there was a gnawing in his stomach, and by and by he say he want some bread. Mr. Man say, "It ain't been so mighty long sense you had breakfast, but no matter about that. Yonder's the house, in the house you'll find my daughter, and she'll give you what bread you want."

With that Brer Rabbit put out for the house, and there he find the gal. She say, "Lord, Brer Rabbit, you ought to be at work, but instead of that here you is at the house. I hear pap say that you are mighty good worker, but if this the way you does you work, I don't know what make him say so."

Miss Nancy allow, "Ain't you ashamed of yourself for to talk that a-way? You know pap ain't sent you."

Brer Rabbit say, "Yes ma'am, he did," and then he smiled one of these here lopsided smiles.

Miss Nancy kind of hang her head and allow, "Stop looking at me so brazen."

Brer Rabbit stood there with his eyes shut, and he ain't say nothing.

Miss Nancy say, "Is you gone to sleep? You ought to be ashamed for to drop off that a-way where there's ladies."

The gal she giggle and say Brer Rabbit oughtn't to make fun of her right before her face and eyes. She ask what her pap sent him for, and he allow that Mr. Man sent him for a dollar and a half, and some bread and butter. Miss Nancy say she don't believe him, and with that she run down towards the field where her pa was working and hollow at him—"Pap! Oh, pap!" Mr. Man make answer, "Hey?" and the gal say, "Is you say what Brer Rabbit say you say?' Mr. Man he holler back that that's just what he say, and Miss Nancy she run back to their house, and give Brer Rabbit a dollar and a half and some bread and butter.

Time passed, and every once in a while Brer Rabbit'd go to the house enduring the day, and tell Miss Nancy that her daddy say for to give him money and some bread and butter. And the gal, she'd go part of the way to where Mr. Man is working, and holler and ask if he say so, and Mr. Man'd holler back, "Yes, honey, that what I say."

It got so after while that there ain't so mighty much money in the house, and about that time, Miss Nancy, she had a beau, which he used to come to see her every Sunday, and sometimes Saturday, and it got so, after while, that she won't scarcely look at Brer Rabbit.

This make him laugh, and he kind of studied how he going to get even with 'em, 'cause the beau got to flinging his sass round Brer Rabbit, and the gal, she'd giggle, as gals will. But Brer Rabbit just sat there, he did, and chew his tobacco, and spit in the fire.

But one day Mr. Man hear him talking to hisself whiles they are working in the same field, and he ask Brer Rabbit what he say. Brer Rabbit allow that he just trying for to learn a speech what he hear a little bird say, and with that he went on digging in the ground just like he don't care whether anything happen or not. But this don't satisfy Mr. Man, and he ask Brer Rabbit what the speech is. Brer Rabbit allow that the way the little bird say it there ain't no sense to it far as he can see. But Mr. Man keep on asking him what it is, and by and by he up and allow, "The beau kiss the gal and call her honey; then he kiss her again, and she give him the money."

Brer Rabbit allow, "You are too much for me. They tells me that money's money, no matter where you get it, or how you get it. If the little bird weren't singing a song, then I'm mighty much mistooken."

But this don't make Mr. Man feel no better than what he been feeling. He went on working, but all the time the speech that the little bird made was running in his mind:
De beau kiss the gal, and call her honey;
Then he kiss her again, and she give him the money.

He keep on saying it over in his mind, and the more he say it the more it worry him. That night when he went home, the beau was there, and he was more gayly than ever. He flung sass at Brer Rabbit, and Brer Rabbit just sat there and chew his tobacco, and spit in the fire.

Then Mr. Man went to the place where he keep his money, and he find it most all gone. He come back, he did, and he say, "Where my money?"

The gal, she ain't want to have no words 'fore her beau, and respond, "You know where it is just as well as I does."

And the man say, "I expect you are right about that, and since I does, I want you to pack up and get right out to this house and take you beau with you."

And so there it was.

The gal, she cry some, but the beau marched her up, and they went off and got married, and Mr. Man took all his things and move off somewheres, I don't know where, and there weren't nobody left in them neighborhoods but me and Brer Rabbit. The gal, she told her chillun about how Brer Rabbit had done her and her pa, and from that time on, they are been pursuing on after him. 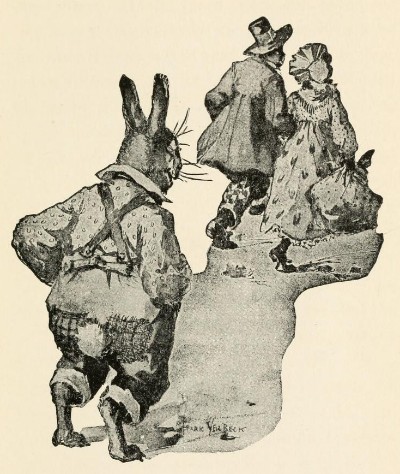