C082. Rabbit, Wildcat, and the Turkeys

48. Brother Rabbit and Mr. Wildcat. Text Source: Nights with Uncle Remus by Joel Chandler Harris. Online at Project Gutenberg. I have removed the frame material and standardized the spelling; click here for the original spelling plus all notes to the story.


RABBIT, WILDCAT, and the TURKEYS

When Brer Rabbit get out of the hollow tree, he took and fling some sass back at old Brer Buzzard, he did, and then he put out down the big road, instead of going along back home and see about he family. He was going along—lickety-clickety, clickety-lickety—when first news you know he feel something or other drop down upon 'im, and there he was. Bless your soul, when Brer Rabbit can get he remembrance together, he feel old Mr. Wildcat a-hugging 'im from behind, and whispering in he ear.

Old Mr. Wildcat hug Brer Rabbit up close and whisper in he ear. Brer Rabbit, he kick, he squall. By and by he catch he breath and allow, "Ow! O Lordy-Lordy! What I done gone and done now?"

Then he laugh, and he tooths strike together right close to Brer Rabbit ear. Brer Rabbit, he allow, he did, "Lord, Mr. Wildcat, I thunk maybe you might like to have Brer Fox for supper, and that the reason I sent 'im up to where you is. It done come to mighty pretty pass when folks can't be friends 'cepting something or other step in 'twixt and 'tween 'em, and if that the case I ain't going to be friends no more—that I ain't."

Mr. Wildcat wipe he nose on Brer Rabbit ear, and he do sort of like he studying. Brer Rabbit he keep on talking. He allow, "Enduring of all this time, is I ever pester 'long with you, Mr. Wildcat?"

"No, Mr. Wildcat, that I ain't. Let alone that, I done my level best for to help you out. And though you done jump on me and scare me scandalous, yet I'm willing to do you another good turn. I hear some wild turkeys yelping out yonder, and if you'll just lemme off this time, I'll go out there and call 'em up, and you can make like you dead, and they'll come up and stretch they neck over you, and you can jump up and kill a whole passel of 'em 'fore they can get out the way."

Mr. Wildcat stop and study, 'cause if there are one kind of meat what he like that meat is turkey meat. Then he took and ask Brer Rabbit is he joking.

Brer Rabbit say if he was setting off somewheres by he own-'lone self he might be joking, but how the name of goodness is he can joke when Mr. Wildcat got 'im hug up so tight? This look so pleezy-plozzy that it weren't long 'fore Mr. Wildcat allow that he was mighty willing if Brer Rabbit mean what he say, and after while, bless your soul, if you'd 've come 'long there, you'd've seed old Mr. Wildcat laying stretch out on the ground looking for all the world just like he done been dead a month, and you'd've heared old Brer Rabbit a-yelping out in the bushes just like a sure enough turkey-hen. 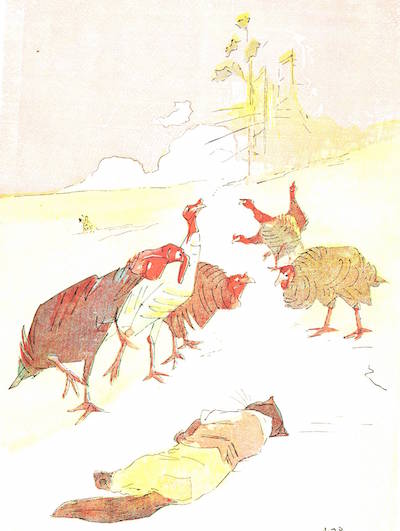 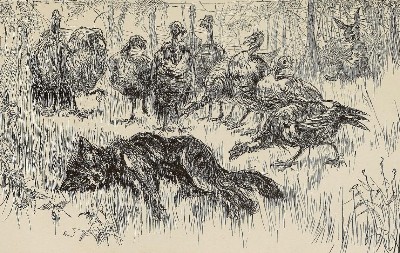 It keep on this a-way, till by and by Mr. Wildcat get tired of waiting, and he jump up, he did, and make a dash at the nighest turkey; but that turkey done fix, and when Mr. Wildcat come at 'im, he just rise in the air, and Mr. Wildcat run under 'im.

Then he took and run at another one, and that one fly up; and they keep on that a-way till it weren't long 'fore Mr. Wildcat was so stiff in the joints and so short in the wind that he just had to lay down on the ground and rest, and when he do this, old Brer Gibley Gobler and all of he folks went on 'bout they own business. But since that day they are constant a-disputing 'long with theyself and everybody what come by.

And Brer Rabbit took and left them low-grounds whiles the disputing was going on; he took and bowed his good-byes, and then he just put out from there. Next day old Brer Gibley Gobbler took and sent 'im a turkey wing for to make a fan out of, and Brer Rabbit, he took and sent it to Miss Meadows and the gals. And I let you know, they make great admiration about it.