C050. Mister Fox and the Grapes

16. How Brother Fox Failed to Get His Grapes. Text Source: Nights with Uncle Remus by Joel Chandler Harris. Online at Project Gutenberg. I have removed the frame material and standardized the spelling; click here for the original spelling plus all notes to the story.


MISTER FOX and the GRAPES

There ain't scarcely no point where old Brer Rabbit and old Brer Fox made their agreements side with one another; let alone that, there was one point 'twixt 'em which it was same as fire and tow, and that was Miss Meadows and the gals. Little as you might expect, them same critters was both of 'em flying 'round Miss Meadows and the gals. Old Brer Rabbit, he'd go there, and there he'd find old Brer Fox sitting up giggling with the gals, and then he'd excuse hisself, he would, and gallop down the big road a piece, and paw up the sand same like a bald-faced steer. And likewise old Brer Fox, he'd saunter in, and find old man Rab sitting alongside of the gals, and then he'd go out down the road and grab a persimmon-bush in he mouth, and naturally gnaw the bark off of it. In them days, critters was worse than what they is now. They was that—lots worse.

They went on this a-way till, by and by, Brer Rabbit begun to cast 'round, he did, for to see if he can't bust into some of Brer Fox arrangerments, and, after while, one day when he were sitting down by the side of the road working up the different argument what strike upon he mind, and fixing up he tricks, just about that time he year a clatter up the long green lane, and here come old Brer Fox—toobookity—bookity—bookity-book—loping along more samer than a bay colt in the barley-patch. And he was all primp up, too, man, and he look slick and shiny like he just come out of the store.

Old man Rab, he sat there, he did, and when old Brer Fox come galloping along, Brer Rabbit, he up and hail him. Brer Fox, he fetch up, and they pass the time of day with one another monstrous polite; and then, by and by after while, Brer Rabbit, he up and say, says he, that he got some mighty good news for Brer Fox; and Brer Fox, he up and ask him what is it. Then Brer Rabbit, he sort of scratch he ear with his behind foot and say, says he, "I was taking a walk day 'fore yesterday," says he, "when the first news I know'd I run up against the biggest an' the fattest bunch of grapes that I ever lay eyes on. They was that fat an' that big," says he, "that the natal juice was just dropping from 'em, and the bees was a-swarmin' after the honey, an' little old Jack Sparrow and all of his family connection was skeeting 'round there dipping in their bills," says he.

Right then and there, Brer Fox mouth begun to water, and he look out of he eye like he the best friend what Brer Rabbit got in the round world. He done forget all about the gals, and he sort of sidle up to Brer Rabbit, he did, and he say, says he, "Come on, Brer Rabbit," says he, "and let's you an' me go get them there grapes 'fore they're all gone," says he.

And then old Brer Rabbit, he  laugh, he did, and up and respond, says he, "I hungry myself, Brer Fox," says he, "but I ain't hankerin' after grapes, an' I'll be in monstrous big luck if I can rush 'round here somewheres an' scrape up a bite of parsley time enough for to keep the breath in my body. And yet," says he,"if you take and rack off after these here grapes, what Miss Meadows and the gals gonna do? I lay they got yo' name in the pot," says he.

"As to that," says old Brer Fox, says he, "I can drop 'round an' see the ladies afterwards," says he.

"Well, then, if that's yo' game," says old man Rab, says he, "I can squat right flat down here on the ground and point out the way just the same as leading you there by the hand," says he; and then Brer Rabbit sort of chew on he cud like he gathering up his remembrance, and he up and say, says he, "You know that there place where you went after sweetgum for Miss Meadows and the gals the other day?" says he.

Brer Fox allow that he know that there place same as he do he own tater-patch.

Brer Fox allow he much obliged, and then he put out after the grapes in a hand-gallop, and when he done got out of sight, and likewise out of hearing, Brer Rabbit, he take and get a blade of grass, he did, and tickle hisself in the ear, and then he holler and laugh, and laugh and holler, till he had to lay down for to get he breath back again.

Old Brer Rabbit, he'd been a-pushing along after Brer Fox, but he just had to scratch gravel for to keep up. Last he hove in sight, and he lay off in the weeds, he did, for to watch Brer Fox motions. Presently Brer Fox crept up the leaning dogwood-tree till he come nigh the grapes, and then he sort of balance hisself on a limb and give 'em a swipe with his big bushy tail, for to brush off the bugs. But, bless yo' soul, no sooner is he done that than he fetch a squall which Miss Meadows vow afterwards she hear plumb to her house, and down he come—kerblim!

That deceitful Brer Rabbit done fool old Brer Fox. Them there grapes all so fine was neither more ner less than a great big wasp-nest, and them bugs was these here red waspies—these here species what's rank poison from end to end. When Brer Fox drop from the tree the waspies they drop with him, and the way they warm old Brer Fox up was sinful. They ain't more than touch him before they had him het up to the boiling point. Brer Fox, he run, and he kick, and he scratch, and he bite, and he scramble, and he holler, and he howl, but look like they get worse and worse. One time, it seem like Brer Fox and his new acquaintance was making towards Brer Rabbit, but they ain't no sooner point that way, than old Brer Rabbit, he up and make a break, and he went sailing through the woods worse than one of thse whirly-winds, and he ain't stop till he fetch up at Miss Meadows.

Miss Meadows and the gals, they ask him, they did, wherebouts was Brer Fox, and Brer Rabbit, he up and respond that he done gone a-grape-hunting, and then Miss Meadows, she allow, she did, "Lord, gals! Is you ever hear the beat of dat? And that, too, when Brer Fox done say he comin' to dinner," says she. "I lay I done with Brer Fox, 'cause you can't put no dependence in these here men-folks," says she. "Here the dinner been done this long time, and we been a-waitin' like the quality. But now I'm done with Brer Fox," says she. 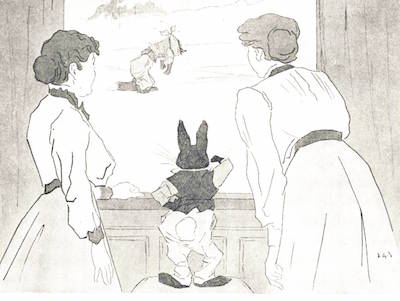 With that, Miss Meadows and the gals they ask Brer Rabbit for to stay to dinner, and Brer Rabbit, he sort of make like he want to be excuse, but by and by he took a chair and set 'em out. He took a chair, and he ain't been there long till he look out and spy old Brer Fox going along by, and what do Brer Rabbit do but call Miss Meadows and the gals and point him out? Soon's they seed him they set up a monstrous gigglement, 'cause Brer Fox was that swell up till little more than he'd've bust. He head was swell up, and down to he legs, they was swell up. Miss Meadows, she up and say that Brer Fox look like he done gone and got all the grapes there was in the neighborhoods, and one of the other gals, she squeal, she did, and say, "Lord, ain't you ashamed, and right here before Brer Rabbit!"

And then they held their hands before their face and giggle just like gals does these days.