C161. The Critters Go to the Barbecue

1. The Creeturs Go to the Barbecue. Text Source: Uncle Remus and Brer Rabbit by Joel Chandler Harris. Online at Project Gutenberg. I have removed the frame material and standardized the spelling; click here for the original spelling plus all notes to the story.

Once upon a time, Mr. Man had a garden so fine that all the neighbors come to see it. Some'd look at it over the fence, some'd peep through the cracks, and some'd come and look at it by the light of the stars. And one of 'em was old Brer Rabbit; starlight, moonlight, cloudlight, the nightlight was the light for him. When the turn of the morning come, he was always up and about, and a-feeling pretty well I thank you, sir!

Now, then, you done hear what I say. There was Mr. Man, yonder was the garden, and here was old Brer Rabbit. Well, this being the case, what you expect going to happen? Nothing in the round world but what been happening since greens and sparrow-grass was planted in the ground. They look fine and they taste fine, and long towards the shank of the morning, Brer Rabbit'd creep through the crack of the fence and nibble at 'em. 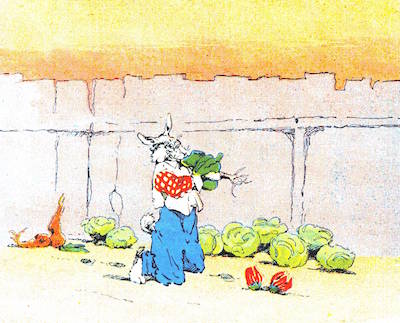 He'd take the greens, but leave his tracks, more specially right after a rain. Taking and leaving — it's the way of the world.

Well, one morning, Mr. Man went out in his truck patch, and he find something missing — a cabbage here, a turnip there, and a mess of beans yonder, and he ask how come this? 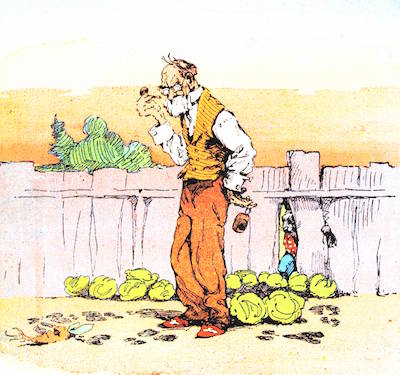 
He look 'round, he did, and he seed Brer Rabbit's tracks what he couldn't take with him. Brer Rabbit had left his shoes at home, and come barefooted.

So Mr. Man, he call his dogs "Here, Buck! Here, Brinjer! Here, Blue!' and he sicced 'em on the track, and here they went! 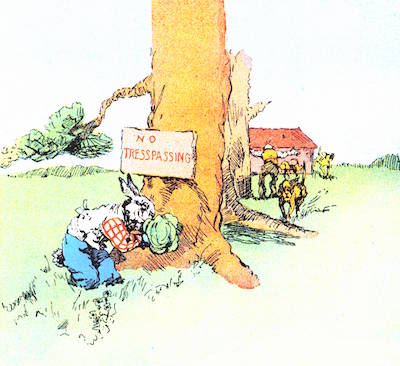 You'd've thunk they was running after forty-eleven rhinossyhorses from the fuss they made. Brer Rabbit he hear 'em coming and he put out for home, kind of doubling 'round just like he do these days. 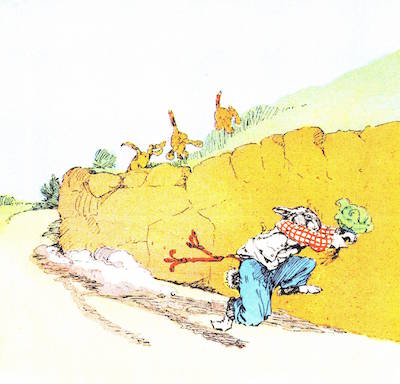 
When he got to the point where he can sat down for to rest his face and hands, he took a poplar leaf and begun to fan hisself.

Then Brer Fox come a-trotting up. He say, "Brer Rabbit, what's all this fuss I hear in the woods? What the name of goodness do it mean?"

Brer Rabbit kind of scratch his head and allow, "Why, they are trying for drive me to the big barbecue on the creek. They all ask me, and when I refuse they say they are going to make me go any how. There ain't no fun in being as populous as what I is, Brer Fox. If you want to go, just get in ahead of the hounds and go lickity-split down the big road!" 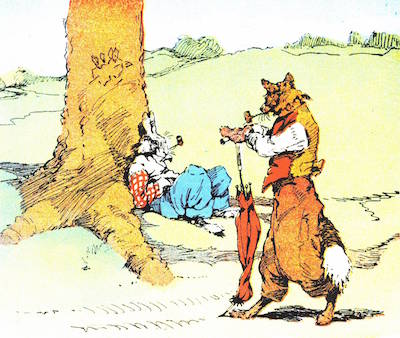 
Brer Fox roll his little eyes, and lick his chops where he dribble at the mouth, an put out to the barbecue, and he ain't more than made his disappearance, 'fore here come Brer Wolf, and when he got the news, off he put.

And he ain't more than got out of sight, 'fore here come old Brer Bear, and when he hear talk of the baking meat and the big pan of gravy, he sat up on his behind legs and snorted. Then off he put, and he ain't got out of hearing, 'fore Brer Coon come racking up, and when he got the news, he put out. 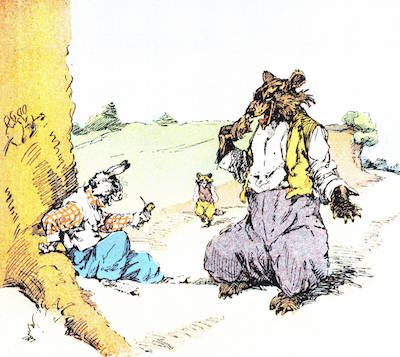 
So there they was and what you gonna do about it? it seem like they all got in front of the dogs, or the dogs got behind 'em, and Brer Rabbit sat by the creek-side laughing and hitting at the snake doctors. And them poor critters had to go clean past the barbecue — if there was any barbecue, which I don't scarcely expect there was. That what make me say what I does — when you get a invite to a barbecue, you better find out when and where it's at, and who running it. 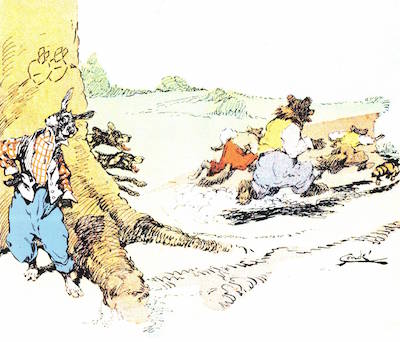