C148. Brother Rabbit and the Chickens

5. Brother Rabbit and the Chickens. Text Source: Told by Uncle Remus by Joel Chandler Harris. Online at Project Gutenberg. I have removed the frame material and standardized the spelling; click here for the original spelling plus all notes to the story.

One time, 'way back yonder there was a man what live neighbor to the critters. There weren't nothing queer about this Mr. Man; he was just a plain, everyday kind of man, and he try to get along the best he can. He ain't had no easy time, neither, 'cause it weren't then like it is now, when you can take your cotton or your corn to town and have the money planked down for you. In them times there weren't no town, and not much money. What folks there was had to get along by swapping and trafficking. How they done it, I'll never tell you, but do it they did, and it seem like they was in about as happy as folks is these days.

Well, this here Mr. Man what I'm a-telling you about, he had a truck patch, and a roasting-ear patch, and a goober patch. He growed wheat and barley, and likewise rye, and kiss the gals and make 'em cry. And on top of that, he had a whole yard full of chickens, and there's where the trouble come in. In them times, all of the critters was meat-eaters, and it was in about as much as they can do, and sometimes a little more, for to get along so they won't go to bed hungry. They got in the habit of being hungry, and they ain't never get over it. Look at Brer Wolf—gaunt; look at Brer Fox—gaunt! They ain't never been able for to make theyself fat.

So then, as you see 'em now, that the way they was in them days, and a little more so. Mr. Man, he had chickens, just like I tell you. Hens as plump as a partridge; pullets so slick they'd make your mouth water, and frying-size chickens that look like the* want to get right in the pan. Now, when that's the case, what you reckon going to happen? Brer Wolf want chicken, Brer Fox want chicken, and Brer Rabbit want chicken. And they ain't got nothing what they can swap for 'em. In these days they'd be called poor, but I take notice that poor folks gets just as hungry as the rich ones—and hungrier, when it comes to that; yes, Lord! Lots hungrier.

Well, the critters got mighty friendly with Mr. Man. They'd call on him, specially on Sundays, and he ain't had no better sense than to cluck up his chickens just to show 'em what a nice passel he had. When this happen, Brer Wolf under-jaw would tremble, and Brer Fox would dribble at the mouth same as a baby what cutting his toothies. As for Brer Rabbit, he'd just laugh, and nobody ain't know what he laughing at.

It went on this way till it look like nature can't stand it, and then, by and by, one night when the moon ain't shining, Brer Rabbit take a notion that he'd call on Mr. Man; but when he got to the place, Mr. Man done gone to bed. The lights was all out, and the dog was curled up under the house sound asleep.

Brer Rabbit shake his head. He allow, "Surely there's something wrong, 'cause always, when I come, Mr. Man call up his chickens where I can look at 'em. I don't know what the matter with him. And I don't see no chickens, neither. I bound you something done happen, and nobody ain't tell me the news, 'cause they know how sorry I'd be. If I could get in the house, I'd go in there and see if everything is all right; but I can't get in."

He walk all 'round, he did, but he ain't see nobody. He was so scared he'd wake 'em up that he walk on his tippy-toes. He allow, "If Mr. Man knowed I was here, he'd come out and show me his chickens, and I just might as well look in and see if they are all right."

With that he went to the chicken-house and peep in, but he can't see nothing. He went to the door, and found it unlocked. Brer Rabbit grin, he did, and allow, "Mr. Man most knowed that I'd be along some time to-day, and done gone and left his chicken-house open so I can see his pullets—and he knowed that if I can't see 'em, I'd want to feel 'em for to see how slick and pretty they is."

Brer Rabbit slap hisself on the leg and laugh fit to kill. He ain't make fuss enough for to wake Mr. Man, but he woke the fat hens and the slick pullets, and they ask one another what the name of goodness is the matter. Brer Rabbit laugh and say to hisself that if he'd've brung a bag, it'd make a good overcoat for four or five of the fat hens, and six or seven of the slick pullets.

Then he allow, "Why, what is I thinking about? I got a bag in my hand, and I forget that I had it. It's mighty lucky for the chickens that I fetch it, 'cause a little more—and they'd've been friz stiff!" So he scoop in the bag as many as he can tote. 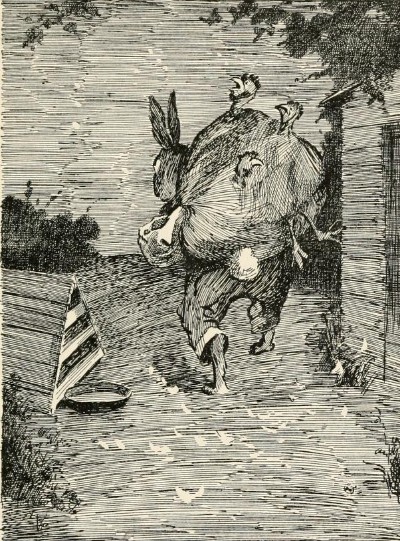 
He allow, "I'll take 'em home and kind of get 'em warm, and tomorrow Mr. Man can have 'em back—if he want 'em." And with that he mighty nigh choke hisself trying for to keep from laughing. The chickens kind of flutter, but they ain't make much fuss, and Brer Rabbit flung the sack 'cross his shoulders and went off home just as gayly as a colt in a barley patch.

Brer Rabbit took the chickens on home, he did, and made way with 'em. Now, that was the last of the chickens, but just the beginnings of the feathers. Ole Miss Rabbit, she want to burn 'em in the fire, but Brer Rabbit say the whole neighborhood would smell 'em, and he allow that he got a better way than that. So, next morning after breakfast, he borrowed a bag from old Brer Wolf, and into this he stuff the feathers, and start off down the road.

Well, sir, as luck would have it, Brer Rabbit had to pass by Brer Fox house, and who should be standing at the gate with his walking-cane in hand, but Brer Fox? Brer Fox, he fetched a bow, with, "Brer Rabbit, where you going?" 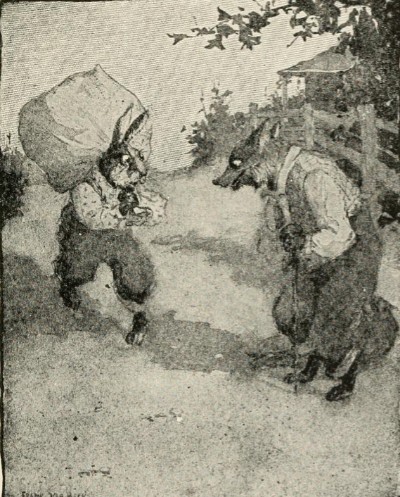 
Brer Rabbit allow, "If I had the wind, Brer Fox, I'd be going to mill. This here's a terrible load I got, and I don't know how soon I'll give out. I ain't strong in the back and limber in the knees like I used to be, Brer Fox. You may be holding you own, and I hope you is, but I'm on the down grade, there ain't no two ways about that." With that, he sat the bag down by the side of the road, and wipe his face with his handkerchief.

Brer Fox, he come on where Brer Rabbit was a-sitting at, and ask if it's corn or wheat. Brer Rabbit allow that it ain't neither one; it's just some stuff that he going to sell to the miller.

Brer Fox, he want to know what it is so bad he ain't know what to do, and he up and ask Brer Rabbit pointedly. Brer Rabbit say he feared to tell him 'cause the truck what he got in the bag is the onliest way he can make big money.

Brer Fox vow he won't tell nobody, and then Brer Rabbit say that being as him and Brer Fox is such good friends—neighbors, as you might say—he don't mind telling him, 'cause he know that after Brer Fox done promise, he won't breathe a word about it. Then he say that the truck what he got in the bag is roots of the Winniannimus grass, and when they're ground up at the mill, they are worth nine dollars a pound.

This make Brer Fox open his eyes. He felt the heft of the bag, he did, and he say that it's mighty light, and he don't know what make Brer Rabbit pant and grunt when it ain't no heftier than what it is.

Brer Rabbit allow that the bag wouldn't've felt heavy to him if he was big and strong like Brer Fox.

That kind of talk make Brer Fox feel biggity, and he allow that he'll tote the bag to mill if Brer Rabbit feel like it's too heavy. Brer Rabbit say he'll be mighty much obliged, and be glad for to pay Brer Fox something to boot.

And so, off they put down the road, Brer Fox a-trotting and Brer Rabbit going in a canter. Brer Fox ask what they does with the Winniannimus grass after they gets it ground up at the mill. Brer Rabbit allow that rich folks buys it for to make Whipmewhopme pudding.

Brer Fox say he'll take some home when the miller get it ground and see how it tastes, and Brer Rabbit say he's more than welcome.

After they been going on some little time, Brer Rabbit look back and see Mr. Man a-coming, and he say to Brer Fox, says he, "Brer Fox, you is the outdoingest man I ever is see. You done got me plumg wore out, and I'm pleased to take a rest. You go on and I'll catch up with you if I can; if not, just wait for me at the mill."

Brer Fox allow, "Shucks, Brer Rabbit! You ain't acquainted with me; you don't know nothing at all about me. I can go on this a-way all day long and half the night."

Brer Rabbit roll his big eyes, and say, "Well, sir!" And then he sat down by the side of the road, and it was all he can do for to keep from busting out in a big laugh.

By and by, Mr. Man come along and say, "Who that with the big bag on his back?"

Brer Rabbit allow, "I ask him, and he say it's some kind of grass what he taking to the mill for to get ground, but I seed more than one chicken feather sticking to the bag."

Mr. Man say, "Then he's the chap what took and took my fat hens and my slick pullets, and I'll make him sorry that he ever is see a chicken."

With that he put out after Brer Fox, and Brer Rabbit, he put out too, but he stay in the bushes, so that nobody can't see him.

Brer Fox sat the bag down and say that when it's ground up the rich folks buys it for to make Whipmewhopme pudding.

Mr. Man open the bag, and there weren't nothing in it but chicken feathers. He allow, "Whipmewhopme pudding! I'll whip you and whop you," and with that he grab Brer Fox in the collar, and mighty nigh flailed the life out of him.

Brer Rabbit seed it well done, and he just fell down in the bushes and roll and laugh till he can't laugh no more.