51. More Trouble for Brother Wolf. Text Source: Nights with Uncle Remus by Joel Chandler Harris. Online at Project Gutenberg. I have removed the frame material and standardized the spelling; click here for the original spelling plus all notes to the story.

After Brer Rabbit took and make out he was poisoned and get all the beef, it weren't long 'fore he chance to meet old Brer Wolf right spang in the middle of the road. Brer Rabbit, he sort of shied off to one side, but Brer Wolf hail 'im, "Whoa there, my colty! Don't be so gayly. You better be ashamed yourself about the way you do me when we go into cahoots with that beef."

Brer Rabbit, he up andask Brer Wolf how all his folks. Brer Wolf say, "You'll find out how they all is 'fore this day gone by. You took and took the beef, and now I'm a-going to take and take you."

With this Brer Wolf make a dash at Brer Rabbit, but he just lack a little bit of being quick 'nough, and Brer Rabbit he just went a-sailing through the woods. Brer Wolf, he took after 'im, and here they had it — first Brer Rabbit and then Brer Wolf. Brer Rabbit more suppler than Brer Wolf, but Brer Wolf got the advantage of the wind, and directly he push Brer Rabbit so close that he run in a hollow log.

Brer Rabbit been in that log before and he know there's a hole at the the other end, and he just keep on a-going. He thread in one end and he slip out the other. He ain't stop to say good-bye; bless you! He just keep on going.

Brer Wolf, he see Brer Rabbit run in the hollow log, and he say to hisself, "Heyo, they been calling you so mighty cunning all this time, and here you done gone and shut yourself up in my trap."

Then Brer Wolf laugh and lay down by the end where Brer Rabbit went in, and pant and rest hisself. He see where Brer Bear burning off a new ground, and he holler and ask 'im for to fetch 'im a chunk of fire, and Brer Bear he fetch it, and they set fire to the hollow log, and they sat there and watch it till it burn plumb up. Then they took and shook hands, and Brer Wolf say he hope that after that they'll have some peace in the neighborhoods.

One time after that, Brer Wolf, he took and pay a call down to Miss Meadows, and when he get there and see Brer Rabbit setting up side of one of the gals, he like to have fainted, that he did. He was that astonished that he look right down-hearted all enduring of the party. 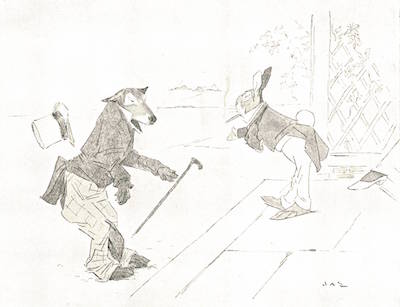 Brer Rabbit, he bowed his howdies to Brer Wolf and shook hands along with 'im, just like nothing ain't never happen 'twixt 'em, and he up and say, "Oh Lord, Brer Wolf! You are much more my friend than you ever expected to be, and you can just count on me right straight along."

Brer Wolf say he feel sort of that a-way hisself, and he ask Brer Rabbit what make 'im change his mind so quick.

"Bless you, Brer Wolf, I had needs to change it," says Brer Rabbit, says he.

"All about being burnt up in a hollow log, Brer Wolf, and when you gets time I wish you be so good as to burn me up some more," says Brer Rabbit, says he.

Brer Rabbit say, "I'm feared to tell you, Brer Wolf, 'kaze I don't want the news to get out."

Brer Wolf vow he won't tell nobody on the top side of the world.

Brer Rabbit say, "I done find out, Brer Wolf, that when you get in a hollow tree and somebody sets it a-fire, that the natural honey just oozles out of it, and more than that, after you get the honey all over you, it ain't no use to try to burn you up, 'cause the honey will preserve you. Don't deny me this favor, Brer Wolf, 'cause I done pick me out another hollow tree," says Brer Rabbit, says he.

Brer Wolf, he got in, he did, and Brer Rabbit stuff the hole full of dry leaves and trash, and then he got 'im a chunk of fire and touch 'er off. She smoked and smoked, and then she bust out in a blaze. Brer Rabbit, he pile up rocks, and brush, and sticks, so Brer Wolf can't get out. Directly Brer Wolf holler, "Getting mighty hot, Brer Rabbit! I ain't see no honey yet."

Brer Rabbit he pile on more trash, and holler back, "Don't be in no hurry, Brer Wolf; you'll see it and taste it too."

Fire burn and burn, wood pop like pistol. Brer Wolf, he holler, "Getting hotter and hotter, Brer Rabbit. No honey come yet."

"Ow! She getting hotter and hotter, Brer Rabbit!"

"Wait for the honey, Brer Wolf."

Brer Rabbit he pile on the trash and the leaves. He say, "I'll give you honey, Brer Wolf; the same kind of honey you wanted to give me."

And it seem like to me, that it done Brer Wolf just right.