58. The Origin of the Ocean. Text Source: Nights with Uncle Remus by Joel Chandler Harris. Online at Project Gutenberg. I have removed the frame material and standardized the spelling; click here for the original spelling plus all notes to the story.

One time way back yonder, 'fore there was any folks a-fooling 'round, Mr. Lion, he took and took a notion that he'd go hunting, and nothing'd do 'im but Brer Rabbit must go with 'im. Brer Rabbit, he allow that he up for any kind of fun on top side of the ground. With that they put out, they did, and they hunt and hunt clean 'cross the country.

They hunt all day long, and when night come, they was such a far ways from home that they had to camp out. They went on, they did, till they come to a creek, and when they come to that, they took and scrape away the trash and built 'em a fire on the bank, and cook they supper. 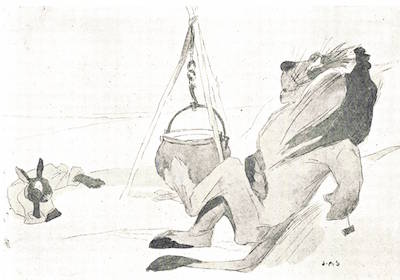 After supper they sat up there and told tales, they did, and Brer Rabbit, he took and brag about what a good hunter Mr. Lion is, and Mr. Lion, he leaned back on he elbow, and feel mighty biggity. By and by, when they eyelids get sort of heavy, Brer Rabbit, he up and allow, "I'm a monstrous heavy sleeper, Mr. Lion, when I gets to napping, and I hope and trust I ain't gonna disturb you this night, yet I got my doubts."

Mr. Lion, he roach he hair back outen he eyes, and allow, "I'm a monstrous heavy sleeper myself, Brer Rabbit, and I'll feel mighty glad if I don't roust you up in the course of the night."

Brer Rabbit, he took and change his tobacco from one side he mouth to the other, he did, and he up and allow, "Mr. Lion, I wish you be so good as to show me how you snore just 'fore you get sound asleep."

Mr. Lion, he took and draw in he breath sort of hard, and show Brer Rabbit; then Brer Rabbit allow, "Mr. Lion, I wish you be so good as to show me how you snore after you done get sound asleep."

Mr. Lion, he took and suck in he breath, and every time he suck in he breath it sound just like a whole passel of mules when they whinny after fodder. Brer Rabbit look astonished. He roll he eye and allow, "I hear tell you are mighty big man, Mr. Lion, and you surely is."

Mr. Lion, he hold he head one side and try to look ashamed, but all the same he ain't feel ashamed. By and by, he shut he eye and begun to nod, then he lay down and stretch hisself out, and it weren't long 'fore he begun to snore like he snore when he ain't sleeping sound. 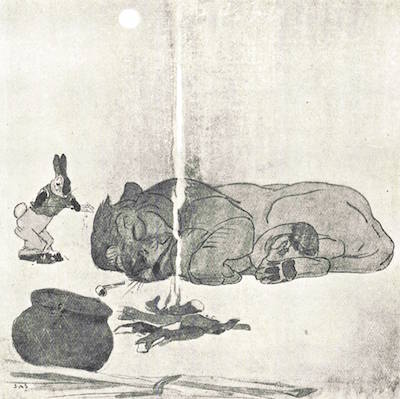 Brer Rabbit, he lay there. He ain't saying nothing. He lay there with one ear hoist up and one eye open. He lay there, he did, and by and by Mr. Lion begun to snore like he snore when he done gone fast to sleep.

When old Brer Rabbit hear this, he get up from there, and sprinkle hisself with the cold ashes 'round the fire, and then he took and fling a whole passel of them hot embers on Mr. Lion. Mr. Lion, he jump up, he did, and ask who done that, and Brer Rabbit, he lay there and kick at he ear with he behind foot, and holler, "Ow!"

Mr. Lion see the ashes on Brer Rabbit, and he don't know what to think. He look all 'round, but he ain't see nothing. He drop he head and listen, but he ain't hear nothing. Then he lay down again and drop off to sleep. After while, when he begun to snore like he done before, Brer Rabbit, he jump up and sprinkle some more cold ashes on hisself, and fling the hot embers on Mr. Lion. Mr. Lion jump up, he did, and holler, "There you is again!"

Brer Rabbit, he kick and squall, and allow, "You ought to be ashamed yourself, Mr. Lion, for to be trying to burn me up."

Mr. Lion hold up he hands and just vow it ain't him. Brer Rabbit, he look sort of dubious, but he ain't say nothing. By and by he holler out, "Phewee! I smells rags a-burning!"

They look all 'round, they did, but they ain't see nothing nor nobody. Brer Rabbit, he say he gonna do some tall watching next time, 'cause he bound to catch the somebody what been playing them kind of pranks on 'em. With that, Mr. Lion lay down again, and it weren't long 'fore he drop to sleep.

Well, then, the very same kind of doings took and happen. The cold ashes fall on Brer Rabbit, and the hot embers fall on Mr. Lion. But by the time Mr. Lion jump up, Brer Rabbit, he holler out, "I seed 'em, Mr. Lion! I seed 'em! I seed the way they come from 'cross the creek! They most surely did!"

With that Mr. Lion, he fetch'd a bellow and he jumped 'cross the creek. No sooner is he do this than Brer Rabbit cut the string what hold the banks together, and, lo and beholds, there they was!

When Brer Rabbit took and cut the string, the banks of the creek, the banks, they fall back, they did, and Mr. Lion can't jump back. The banks they keep on falling back, and the creek keep on getting wider and wider, till by and by Brer Rabbit and Mr. Lion ain't in sight of one another, and from that day to this the big waters been rolling 'twixt 'em.