17. Mr. Fox Figures as an Incendiary. Text Source: Nights with Uncle Remus by Joel Chandler Harris. Online at Project Gutenberg. I have removed the frame material and standardized the spelling; click here for the original spelling plus all notes to the story.


TURTLE, RABBIT, and FOX in the FIRE

Brer Fox done been fool so much by Brer Rabbit that he sort of look 'round for to see if he can't catch up with some of the other critters, and so, one day, whiles he going long down the big road, who should he strike up with but old Brer Terrapin. Brer Fox sort of lick his chops, and allow that if hecan fling anybody and give 'em all-under hold, Brer Terrapin the man, and he march up, mighty biggity, like he going to make sport of him. When he get up nigh enough, Brer Fox hail him, "How you 'spect you find yo'self this mornin', Brer Terrapin?" says he.

"Slow, Brer Fox—mighty slow," says Brer Terrapin, says he. "Day in an' day out I'm mighty slow, an' it look like I'm a-gettin' slower; I'm slow an' poorly, Brer Fox—how you come on?" says he.

"Oh, I'm slantindicular, same as I always is," says Brer Fox, says he. "What make yo' eye so red, Brer Terrapin?" says he.

"It's all 'long of the trouble I see, Brer Fox," says Brer Terrapin, says he. "I see trouble an' you see none; trouble come an' pile up on trouble," says he.

"Lord, Brer Terrapin!" says Brer Fox, says he, "you ain't see no trouble yet. If you want to see sure enough trouble, you just ought to go 'long of me; I'm the man what can show you trouble," says he.

"Well, then," says old Brer Terrapin, says he, "if you are the man what can show me trouble, then I'm the man what want a glimpse of it," says he.

Brer Terrapin knowed there's something wrong somewheres, yet he most too flat-flooted for to have any scuffle with Brer Fox, and he say to hisself that he'll go along and just trust to luck; and then he allow that if Brer Fox help him 'cross the fence, he believe he'll go up and risk one eye on the Old Boy. Course Brer Fox help him 'cross, and no sooner is he good and gone, than Brer Fox, he fix up for to make him see trouble. He leaped out to Miss Meadows house, Brer Fox did, and make like he want to borrow a chunk of fire for to light he pipe, and he took that chunk, and he run 'round the field, and he set the grass a fire, and it weren't long before it look like the whole face of the earth was a-blazing up.

When old Brer Terrapin begun to wade through the straw, the very first man what he strike up with was old man Rabbit laying there sleeping on the shady side of a tussock. Brer Rabbit, he one of there here kind of mens what sleep with their eye wide open, and he was awake directly he hear Brer Terrapin scuffling and scrambling along through the grass.

After they shook hands and ask about one another family, it ain't take long for Brer Terrapin for to tell Brer Rabbit what fetch him there, and Brer Rabbit, he up and say, says he, "It's just naturally a born blessing that you struck up with me when you did," says he, "'cause little more and both of us would've been barbecued," says he.

This kind of terrify Brer Terrapin, and he say he want to get out from there; but Brer Rabbit he allow he'd take care of him, and he took and took Brer Terrapin in the middle of the field where there was a big hollow stump. Onto this stump Brer Rabbit lift Brer Terrapin, and then he leaped up hisself and crept in the hollow, and, bless yo' soul, when the fire come a-snipping and a-snapping, there they sat safe and snug.

When the blaze blow over, Brer Terrapin look 'round, and he see Brer Fox running up and down the fence like he hunting something. Then Brer Rabbit, he stick he head up out of the hole, and likewise he seed him, and then he holler like Brer Terrapin, "Brer Fox! Brer Fox! O Brer Fox! Run here—we done catch Brer Rabbit!"

And then Brer Fox, he jump up on the top rail of the fence and fetch a spring that land him 'way out in the burning grass, and it hurted him and sting him in the footses that bad, that he squeal and he roll, and the more he roll the worse it burn him, and Brer Rabbit and Brer Terrapin they just holler and laugh. By and by Brer Fox get out, and off he put down the road, limping first on one foot and then on the other. 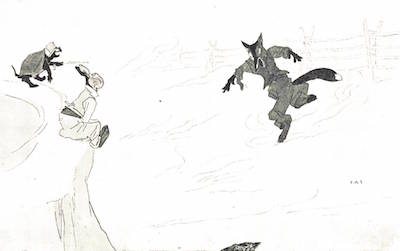