19. The Moon In the Mill-Pond. Text Source: Nights with Uncle Remus by Joel Chandler Harris. Online at Project Gutenberg.


THE MOON in the MILL-POND

There was times, when the critters'd segashuate together just like they ain't had no falling out. Them was the times when old Brer Rabbit'd tend like he gonna quit he behavishness, and they'd all go 'round just like they belong to the same family connection.

One time after they been going in cohoots this a-way, Brer Rabbit begun to feel his fat, he did, and this make him get projecty directly. The more peace what they had, the more worse Brer Rabbit feel, till by and by he get restless in the mind. When the sun shine he'd go and lay off in the grass and kick at the gnats, and nibble at the mullein stalk and wallow in the sand. One night after supper, whiles he was romancing 'round, he run up with old Brer Terrapin, and after they shook hands they sat down on the side of the road and run on about old times. 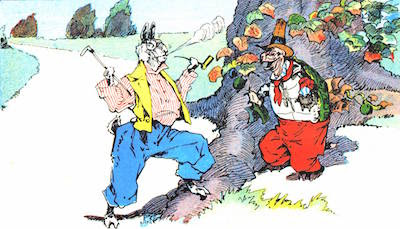 They talk and they talk, they did, and by and by Brer Rabbit say it done come to that pass where he pleased to have some fun, and Brer Terrapin allow that Brer Rabbit just the very man he been looking for.

"If I ain't there," says he, "then you may know the grasshopper done fly 'way with me," says he.

"And you needn't bring no fiddle, neither," says Brer Rabbit, says he, "'cause there ain't goin' to be no dancin' there," says he.

With dat, Brer Rabbit put out for home, and went to bed, and Brer Terrapin bruise 'round and make his way towards the place so he can be there begin the appointed time.

Next day Brer Rabbit sent word to the other critters, and they all make great admiration, 'cause they ain't think about this theyself. 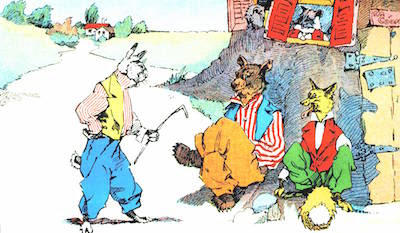 Brer Fox, he allow, he did, that he going after Miss Meadows and Miss Motts, and the other gals. 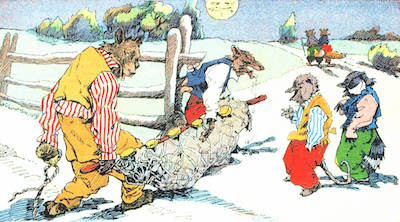 They all get ready, they did, and Brer Rabbit march up to the pond and make for to throw he hook in the water, but just about that time it seem like he see something. The other critters, they stop and watch his motions. Brer Rabbit, he drop he pole, he did, and he stand there scratching he head and looking down in the water.

The gals they begun to get uneasy when they see this, and Miss Meadows, she up and holler out, she did, "Lord, Brer Rabbit, what the name of goodness the matter in there?"

Brer Rabbit scratch he head and look in the water. Miss Motts, she held up her petticoats, she did, and allow she monstrous feared of snakes. Brer Rabbit keep on scratching and looking.

By and by he fetch a long breath, he did, and he allow, "Ladies and gentlemens all, we just might as well make tracks from this here place, 'cause there ain't no fishing in that pond for none of this here crowd."

With that, Brer Terrapin, he scramble up to the edge and look over, and he shake he head, and allow, "To be sure—to be sure! Tut-tut-tut!" and then he crawl back, he did, and do like he working he mind.

"Don't be scared, ladies, 'cause we are bound to take care of you, let come what will, let go what must," says Brer Rabbit, says he. "Accidents got to happen unto we all, just same as they is unto other folks; and there ain't nothin' much the matter, exceptin' that the Moon done drop in the water. If you don't believe me you can look for yo'self," says he.

With that they all went to the bank and looked in; and, sure enough, there lay the Moon, a-swinging and a-swaying at the bottom of the pond. 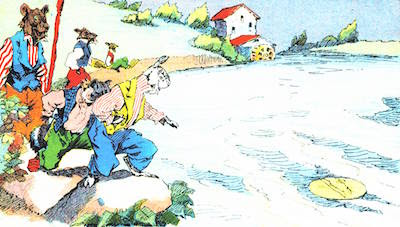 Brer Wolf, he look in, and he allow, "Mighty bad, mighty bad!"

The ladies they look in, and Miss Meadows she squall out, "Ain't that too much?"

Brer Rabbit, he look in again, and he up and allow, he did, "Ladies and gentlemens, you all can hum and haw, but unless we gets that Moon out of the pond, there ain't no fish can be catch 'round here this night; and if you'll ask Brer Terrapin, he'll tell you the same."

Then they ask how can they get the Moon out of there, then Brer Terrapin allow they better leave that with Brer Rabbit. Brer Rabbit he shut he eyes, he did, and make like he working he mind. By and by, he up and allow, "The nighest way out of this here difficulty is for to send 'round here to old Mr. Mud-Turtle and borrow his seine, and drag that Moon up from there," says he. 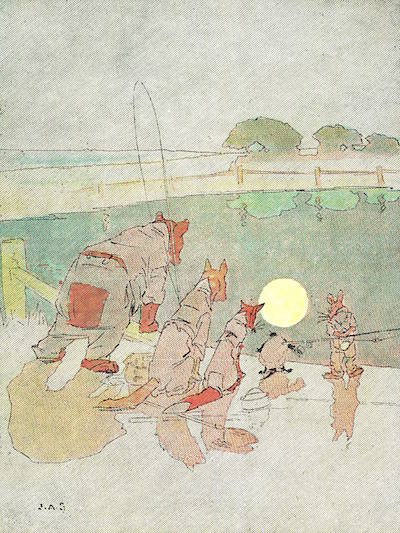 "I declare to gracious I mighty glad you mention that," says Brer Terrapin, says he. "Mr. Mud-Turtle is such closest kin to me that I calls him Unc Muck, and I lay if you send there after that seine you won't find Unk Muck so mighty disaccommodatin'."

Well, they sent after the seine, and whiles Brer Rabbit was gone, Brer Terrapin, he allow that he done hear tell time and time again that them what find the Moon in the water and fetch him out, likewise they'll fetch out a pot of money. This make Brer Fox, and Brer Wolf, and Brer Bear feel mighty good, and they allow, they did, that long as Brer Rabbit been so good as to run after the seine, they'll do the seining.

Time Brer Rabbit get back, he see how the land lay, and he make like he want to go in after the Moon. He pull off he coat, and he was fixing for to shook he waistcoat, but the other critters they allow they weren't going to let dryfoot man like Brer Rabbit go in the water. So Brer Fox, he took hold of one staff of the seine, Brer Wolf he took hold of the other staff, and Brer Bear he wade along behind for to lift the seine 'cross logs and snags. 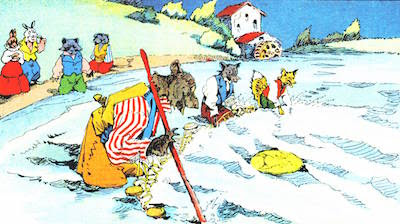 When they come out, the gals was all a-snickering and a-giggling, and they well might, ''cause go where you would, there weren't no worse looking critters than them; and Brer Rabbit, he holler, says he, "I 'spect you all, gents, better go home and get some dry duds, and another time we'll be in better luck," says he. "I hear talk that the Moon'll bite at a hook if you take fools for baits, and I lay that's the onliest way for to catch her," says he.

Brer Fox and Brer Wolf and Brer Bear went dripping off, and Brer Rabbit and Brer Terrapin, they went home with the gals. 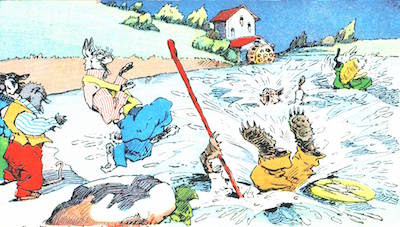