C037. Brer Rabbit in the Garden

3. Brother Rabbit and the Little Girl. Text Source: Nights with Uncle Remus by Joel Chandler Harris. Online at Project Gutenberg. I have removed the frame material and standardized the spelling; click here for the original spelling plus all notes to the story.

Now, then, you don't want to push old Brer Rabbit too close. He mighty tender-footed critter, and the more what you push him, the further he left you.

One time, after Brer Rabbit done been tramping 'round hunting up some salad for to make out he dinner with, he find hisself in the neighborhoods of Mr. Man house, and he pass along till he come to the garden-gate, and nigh the garden-gate he see Little Gal playing 'round in the sand. When Brer Rabbit look 'twixt the garden-palings and see the collards, and the sparrow-grass, and the other garden truck growing there, it make he mouth water. Then he take and walk up to the Little Gal, Brer Rabbit did, and pull he roach, and bow, and scrape he foot, and talk mighty nice and slick. 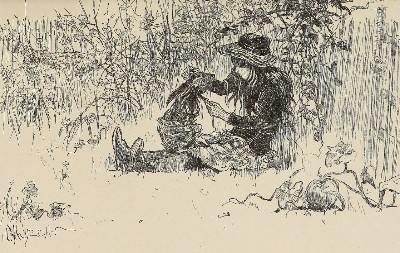 Brer Rabbit, he say he mighty glad, 'cause he just been up there for to see her pa, and he say that her pa, he sent him out there for to tell the Little Gal that she must open the garden-gate so Brer Rabbit can go in and get some truck. 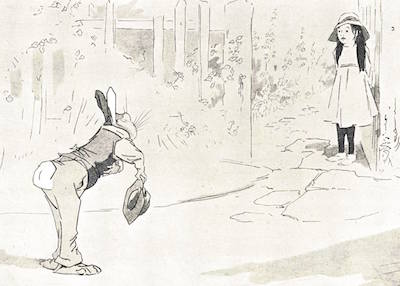 Then the Little Gal, she jump 'round, she did, and she open the gate, and with that, Brer Rabbit, he hop in, he did, and got him a mess of greens, and hop out again, and when he going off he make a bow, he did, and tell the Little Gal that he much obliged, and then after that he put out for home.

Next day, Brer Rabbit, he hide out, he did, till he see the Little Gal come out to play, and then he put up the same tale, and walk off with another mess of truck, and it keep on this a-way, till by and by Mr. Man, he begun to miss his greens, and he keep on a-missing on 'em, till he got to excusing everybody on the place of destroying on 'em, and when that come to pass, the Little Gal, she up and say, "My goodness, pa!" says she; "you done told Mr. Rabbit for to come and make me let him in the garden after some greens, and ain't he done come and ask me, and ain't I done gone and let him in?" says she.

Mr. Man ain't have to study long before he see how the land lay, and then he laugh, and tell the Little Gal that he done gone and disremember all about Mr. Rabbit, and then he up and say, says he, "Next time Mr. Rabbit come, you take an' turn him in, an' then you run just as fast as you can an' come an' tell me, 'cause I got some business with that young chap that's pleased to be tended to," says he.

Sure enough, next morning there was the Little Gal playing 'round, and here come Brer Rabbit after he allowance of greens. He was ready with the same tale, and then the Little Gal, she turn him in, she did, and then she run up to the house and holler, "O pa! pa! O pa! Here Brer Rabbit in the garden now! Here he is, pa!"

Then Mr. Man, he rush out, and grab up a fishing-line what been hanging in the back porch, and make for the garden, and when he get there, there was Brer Rabbit trampling 'round on the strawberry-bed and mashing down the tomatoses. When Brer Rabbit see Mr. Man, he squat behind a collard leaf, but it weren't no use. Mr. Man done seed him, and before you can count eleven, he done got old Brer Rabbit tie hard and fast with the fishing-line.

After he got him tie good, Mr. Man step back, he did, and say, says he, "You done been fool me lots of time, but this time you are mine. I'm goin' to take you an' give you a larrupin'," says he, "an' then I'm goin' to skin you an' nail yo' hide on the stable door," says he; "an' then to make sure that you get the right kind of larruppin', I'll just step up to the house," says he, "an' fetch the little red cowhide, and then I'll take and give you brimstone and ginger," says he.

Then Mr. Man call to the Little Gal to watch Brer Rabbit whiles he gone.

Brer Rabbit ain't saying nothing, but Mr. Man ain't more than out the gate before he begun to sing; and in them days Brer Rabbit was a singer, man, and when he tuned up for to sing he make them other critters hold their breath.

If I ain't forget that song off of my mind, it run sort of this here way:

The jay-bird hunt the sparrow-nest,
The bee-martin sail all 'round;
The squirrel, he holler from the top of the tree,
Mr. Mole, he stay in the ground;
He hide and he stay till the dark drop down—
Mr. Mole, he hide in the ground.

When the Little Gal hear that, she laugh, she did, and she up and ask Brer Babbit for to sing some more, but Brer Rabbit, he sort of cough, he did, and allow that he got a mighty bad hoarseness down into he windpipe somewheres.

With that the Little Gal, she reach down and unloose the fish-line, and Brer Rabbit, he sort of stretch hisself and look 'round.