Bo Rabbit Smart for True: Tall Tales from the Gullah 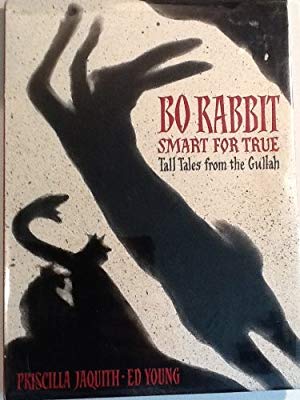 From the Author. A few words about the origins of the Gullah people, and about the language (cooter from African kuta). Different scholars emphasize the English dialect or African sides more. These stories are based on work of Alfred Stoddard, born in 1872 on Daufuskie Island where his father had a plantation. When he was 77 he went to Library of Congress and offered to record the Gullah stories he knew.

... 1. Bo Rabbit Smart for True. Rabbit tells Elephant he can pull him out of bed, and then he tells Whale he can pull him out of the deep water. Rabbit ropes them together. They start pulling. Elephant has to grab onto two trees to stop himself, and Whale has to grab rock. Rabbit cuts rope, and then tells Elephant he pulled him out of bed, and tells Whale he pulled him up out of the deep water.
"No matter how little you are, if you're smart for true, you can best the biggest crittuh in the sea and the biggest crittuh on earth. It stands so."
Author notes: Adolph Gerper found Mauritius parallel; Hermit Smith reports version from Brazil with tortoise outwitting a tapir.

The pairing of the elephant and whale is a really great feature of this story, land and water.

... 2. Alligator's Sunday Suit. Alligator used to wear his white Sunday suit all the time, and he never knew trouble. Rabbit offered to show him trouble if they just come out of the swamp into the field. The Alligator family all come and stand in the field, and Rabbit sets the field on fire. They have to jump in the creek for safety, and now their skin is all wrinkled and cracked.
"I've learned one lesson for all my life," says Alligator. "Don't go looking for trouble, else you might find it."
Author notes: This story is in Charles C. Jones, A. M. H. Christensen, and also J. C. Harris. Elsie Parsons has a Guilford County story about Terrapin in brush heap that Rabbit sets on fire.

To amplify the story, there's a really cute scene where Alligator is going to go along but his wife absolutely insists on coming, and then the little Alligators do too.

... 3. Cooter's Wing. Father invites all the birds to a party in heaven, and Cooter wants to go too. He asks all the birds one by one to tote him up there, but they all refuse. Crow agrees, but he's just tricking Cooter. They fly up and then Crow drops him; he lands on his back in the marsh mud. Used to be Cooter had a smooth white shell, but now it is all cracked, colored yellow and black.
Don't try for do something you've no business doing. Crittuh without wings belong on earth. Be satisfy with what Father give you and enjoy.
Author notes: Variants from Lesser Antilles, Jamaica, Cape Verde Islands and also Ashanti, Zuni, Hopi, and Uinta Ute. In Trinidad version, each bird gives Tortoise a feather, but Tortoise is greedy at the party so they take back their feathers. In Guadeloupe version, Tortoise is smashed but God puts him back together.

The list of birds that Cooter consults with is long, and it's fun to see him interact with all those different birds.

... 4. Bo Rabbit's Hide-and-Seek. Rabbit and Partridge debate best strategy for escaping eagles and other dangers: run or hide? Rabbit says run; Partridge says hide. Rabbit says he can hide better than anybody. Partridge disagrees. They have contest. Rabbit keeps poking his eye out to look, and Partridge finds him. When Partridge hides, it is perfect: Rabbit cannot see him even standing right there on top of him. The Rabbit has long legs for running, and Partridge has camouflage features for hiding.
What's right for some of us ain't necessarily right for others. We each got out own ways, and we best accommodate ourselves and respect each other.
Author notes: Elsie Parsons has a version from Hilton Head where they bet their children, and Partridge ends up taking a baby rabbit.

This is such a cute story. Like with the Alligator story, the Partridges are a family: father, mother, and little Partridges, and the family interactions are very cute.

... 5. Manners for True. Fox invites Crane and serves frog soup in a shallow dish so Crane can't eat. Crane invites Fox and serves fish in long-necked jar so Fox can't eat.
It doesn't matter what a man's mouth says. If he has good manners for true, he has them in his heart and he'll never pink anyone's belly and he'll never hurt anyone's feelings. It stands so.
Author notes: Because this is Aesop's fable, there are lots of references.

Of course this is an old Aesop's fable, and the illustrations here are delightful; the best one is the poor fox wrapping his paws around the jar while Crane eats, just hoping to get at least a little taste.

... 6. Rattlesnake's Word. Rattlesnake is caught under a branch. Fox comes along, but he refuses to help. Bear comes along and agrees to help, but when he moves the branch, Rattlesnake gets ready to kill him. Rabbit comes along, and refuses to believe Rattlesnake was ever under that branch, taunting Rattlesnake that he's too fat to fit under there. Rattlesnake gets back under branch, and Bear drops it down on top of him again.
Just goes to show you got to study who says a thing before you take it for true. A man's word is no better than the man himself. It stands so.
Author notes: Again, because this is a famous world folktale, there are lots of references.

WOW. This is a fantastic version of this ancient Indian story. I love having Brer Rabbit be the helper, while Brer Fox is smart enough to decline (in the Indian story, it is the jackal who helps the man escape being eaten by the freed tiger).

Email ThisBlogThis!Share to TwitterShare to FacebookShare to Pinterest
Labels: Diigo:yes, My Library, Resources